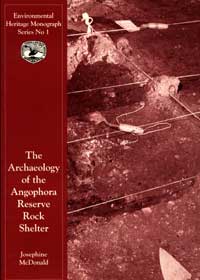 Angophora Reserve rockshelter is in a bushland reserve on top of Barrenjoyey Peninsula (northern Sydney) with the ocean to the east and estuarine Pittwater to the west. This monograph describes excavations in the rockshelter’s Aboriginal shell midden and presents results of archaeological analyses as at 1990. Investigations were instigated by the NSW Police after a fragment of a child’s jaw and teeth found in the rockshelter were reported to local police. Police believed the jaw may have been from a murder victim and that further remains may have been buried in the midden as several local children had gone missing in recent years.

Thirty square metres of shell midden were excavated though not all squares were taken to bedrock. Some of the more unusual finds are described as well as materials from five 50 cm s 100 cm pits excavated to bedrock. A wide range of organic materials were preserved. In addition to skeletal remains and materials commonly found in middens (shells, fish and land animal bones, and stone arte- facts), there was macrozamia (fragmented and intact kernels and sclerotestae, and cone fragments), possible woven fibre, used shells, bone points, and stone artefacts in hafted Xanthorrhoea resin.

A very interesting assemblage. But unfortunately, the way it is reported does it no justice. The monograph documents useful and interesting data but there are some unconsidered conclusions, unclearly stated or unsystematic methodologies, and a large number and variety of errors, which must be laid jointly at the feet of the author, editor/s and publisher. These aspects (some mentioned below) detract greatly from its usefulness.

The first five chapters provide background to the excavations, a description of the site and its environmental, ethno historical and archaeological contexts, and the aims, methods and terminology. Chapters 6, 7, 8 and 9 (and Appendix I) present the stratigraphy and analyses of excavated faunal remains, which focus on shellfish, fish and land animals. Other chapters cover dietary estimates (10), burials and human remains (11), artefacts (12), plant remains and pigment (13), spatial variation (14) and forensic conclusions (15). The concluding chapter (16) discusses site formation, site use, the site’s economic focus, the human skeletal material, and assessment of the site’s significance. Radiocarbon ages suggest initial occupation extends back 2000 years. The most recent date of l330+-100 BP (ANU-6922) from 9cm below the surface (as well as the lack of fish hooks and contact artefacts) led McDonald (pp.96, 127) to conclude that the site was not used after ca 800 BP.

Positive features of the monograph are, firstly, that the shell component is analysed in some detail, and the level of detail presented is much greater than that usually published. Secondly, analysis of the non-shellfish component of the fauna by Vivienne Wood is excellent. Mammals and fish dominate the bone assemblage, though most bone (85%) is from terrestrial mammals. This is supported by dietary estimates: fish 7%; shellfish 1%; terrestrial fauna 91%; reptiles, birds and crustacea 1%. Thirdly, information about the macrozamia processing pit is of interest; this is the first such find in coastal New South Wales.

Negative features of this monograph are numerous. One is presentation of tabulated data according to individual excavation squares. Comments on each square become repetitive, and by the end of some chapters it is difficult to remember the detail and to readily deduce whether there is any consistent temporal patterning in the site as a whole in the material being discussed; this is particularly evident in the shellfish and artefacts chapters. Lack of chapter summaries exacerbates this problem, and people wishing to use the Angophora Reserve data for comparative purposes may find this exasperating. Another is that some aspects of the methods are not clear, e.g. the sieve mesh size used at particular stages of the fieldwork and analyses, and criteria used to calculate minimum numbers of individuals (MNI) for some shellfish species are not clearly defined.

McDonald (p.134) presents ‘three possible interpretations’ of the evidence for the economic focus of the site:

i) this site represents a winter habitation site, occupied when marine resources were scarce and hunters had been forced to utilised [sic] terrestrial resources;

ii) this site represents a pre fish-hook economy, less efficient at extracting a diet based purely on maritime resources; or,

iii) the ethnohistoric records are an inaccurate reflection of the complex of economic activities practised by the Aborigines in Sydney at contact.

Interpretations (i) and (iii) are discussed below.

(i) A winter habitation site

Wood’s interpretation, based on ethno-historic records, is that the shelter was mainly occupied in winter when maritime resources were scarce and terrestrial species relatively easy to locate and hunt. McDonald (p.134) says Wood’s conclusions are ‘not supported by the temporal trends across the site, which shows [sic] fish contributing consistently (in low proportions) to the bone component for each square’. But the presence of fish does not negate Wood’s view, as people still fished in winter (e.g. Bradley 1786-1792[1969]: 141). McDonald also states: ‘there is no indication that the proportion of molluscs in the assemblage is inversely related to terrestrial fauna over time. In other words, the data do not support an interpretation of the site being used in summer (and fish and shellfish being deposited at this time) followed by a winter usage, in which terrestrial species were eaten (in the absence of shellfish and fish species). Of course, the archaeological resolution may not be able to distinguish between alternating seasonal occupations.’

This is a spurious counter-argument as McDonald herself acknowledges. It is unlikely in this site’s depositional environment that materials left during one visit or season could be distinguished from those left during another.

Other interpretations could be made given the site’s location in forested country with a wide range of terrestrial fauna and the short distances to either shoreline. The rockshelter could have been used at any time of the year – when people wanted a change from a marine diet or to escape inclement weather, or when marine resources were scarce due to inclement weather. It is not surprising to find land animals predominating in a site in this location. What is perhaps ‘strange’ (as McDonald comments on p.132) is the presence of so many shells and fish bone. Fish and shellfish may have been collected and taken to the shelter as the first meal/s at the start of a substantial period of hunting (seasonal or otherwise), or visits to this shelter and the hunting of land animals may have simply been embedded within a range of activities which took place across the landscape throughout the year. Interpreting the excavated materials from Angophora Reserve in terms of a seasonal use appears unwarranted.

(iii) The ethnohistoric records are an accurate reflection

McDonald (p.135) says the argument that the site represents a pie-fish hook economy is less easily refuted than arguments about seasonal use, but ‘the argument that the ethnohistoric record is inaccurate is fairly easily sustained’. However, McDonald presents no evidence to support this latter statement. In any case, if McDonald is not refuting that the site represents a pre-fish hook economy (see above), then the archaeological record at Angophora Reserve cannot be used to test or assess the validity of the ethnohistoric records. In the last 800 or 1000 years changes took place in Aboriginal material culture (e.g. introduction of fish hooks) which may have effected the rest of the tool kit in terms of either the types of implements used, the frequency in which particular implements were made and/or used or the raw materials used. If the site was not occupied in the last 800 – 1000 years, then the excavated materials cannot be used as evidence to indicate what happened at the time the British settled. The data simply show that what was happening between ca.2000 and 800 years ago at Angophora Reserve was different to what was described by the historic journalists at contact. Whether the historic records are inaccurate is another matter – but there is a subtle difference between the two statements.

McDonald concludes p.138): ‘The data analysed so far challenges many of our preconceptions about the coastal economy of the Sydney Aborigines, particularly aspects based on ethnohistoric observations. It is clear from this investigation that the coastal tribes did use lithic artefacts and did eat terrestrial fauna.’

These emphatic conclusions are unwarranted. Researchers have long known that Aboriginal people of the Sydney coast used stone artefacts. This is seen in early artefact collections from Bondi, Maroubra, Dee Why Lagoon, Avalon (Croll 1980; Etheridge and Whitelegge 1907; Kennedy 1934a, 1934b; Ross 1976:62) and from more recent excavations at Kurnell, Botany Bay and Royal National Park (Dickson 1968; Megaw 1974). Balls Head (Bowdler 197l), Newport (Tracey 1974), Bantry Bay (Ross and Specht 1976), Spring Cove (Stockton 1977324). McDonald (p.95) acknowledges this herself earlier in the monograph: ‘Archaeological evidence, however, demonstrates that stone was commonly used throughout the region, and the Angophora Reserve site is no exception’.

My next remarks return to the reason for these excavations – the skeletal remains. During the archaeological excavations further human skeletal remains were exposed, including in situ burials in the midden deposits. These remains indicate that Aboriginal burials took place within the shelter, and the fragments found on the surface were Aboriginal rather than a recent murder victim. The re- mains are discussed in several places but very few details are provided about the five or six individuals that were revealed. Lack of details about their morphology is partially due to circumstances under which the remains were excavated, but a greater level of detail about the positioning of the burials within the deposits (e.g. orientation and relationship to each other) and estimated dates of burial could have been presented. Throughout the project relations between officers of the Police Department, NPWS and Coroner’s office and the consultants were not always cordial (McDonald and Ross 1990). Unfortunately, the tone and some comments in this monograph and earlier article are unlikely to promote better future relations. It may have been useful, and perhaps helped promote better future relations, if a copy of the Coroner’s report had been included. Was he asked?

Finally, the numerous minor errors and inconsistencies: spelling mistakes (particularly shellfish names), typographical errors, referrals to wrong figures and plates; inconsistent use of scientific, common names, and abbreviations for shellfish; factual errors (e.g. number, type and present location of ethnohistoric artefacts in various museums around the world are incorrect); lack of scale and/or north signs on figures and referencing errors (i.e. wrong publication dates, or source not included in list of references); the hafted microlith in Plate 9 is not referred to or discussed anywhere. The format of entries in the combined reference list is quite variable and full of abbreviations without a glossary.

NSW National Parks and Wildlife Service is to be commended for initiating this series. However, future issues need a much more rigorous standard of editing. More care and more work by the author, editor and publisher of this monograph could have made this monograph more useful and a less irritating document to use.

Bowdler, S. 1971 Balls Head: The excavation of a Port Jackson rockshelter. Records of The Australian Museum 28:117-28.

Etheridge, R. and Whitelegge, T.W. 1907 Aboriginal workshops on the coast of New South Wales, and their contents. Records of The Australian Museum VI:233-50.

McDonald, J. and Ross, A. 1990 Helping the police with their inquiries: Archaeology and politics at Angophora Reserve rockshelter, N.S.W. Archaeology in Oceania 25(3):114-21.

Tracey, T. 1974 Three minor sites near Curracurrang with a preliminary note on a rock shelter at Newport. In J.V.S. Megaw (ed.) The Recent Archaeology of the Sydney District – Excavations 1964-1967, pp. 19-27. Canberra: Australian Institute of Aboriginal Studies.

Attenbrow, V.
Review of 'The archaeology of the Angophora Reserve rock shelter’ by Josephine McDonald
December 1995
41
59–61
Book Reviews
You must be a member to download the attachment ( Login / Sign up )