Review of ‘Second Nature: The History and Implications of Australia as Aboriginal Landscape’ by Lesley Head 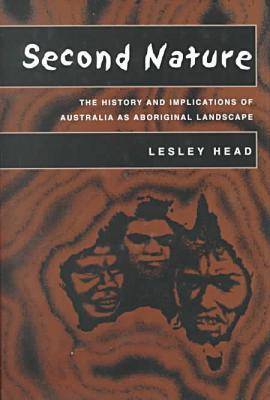 Second Nature brings together a number of themes which Lesley Head has explored over the past decade. These include Lake Argyle and the Ord River scheme, and concepts of the natural, of Aboriginalness, of the traditional, of hunter gatherers, and a variety of perspectives on landscapes. The book presents a discourse rather than an argument though running just below its surface is the notion that, in seeking simple answers to complex problems, we run the risk of missing facts which are in front of our eyes.

The manner in which Australians conduct political debates about their country and its human inhabitants has a history of its own. The first five chapters of Second Nature locate this history in attempts to classify nature and the Aborigines in geological, geographical and anthropological terms, based either on climate, race, evolution, time or function. Head argues that there was a ‘conceptual dispossession’ of the Aborigines which ran parallel with the processes of physical dispossession. Both forms of dispossession continue to the present.

Arguments about the Australian past are often presented as generalities. In drawing our attention to the Head family history and the author’s genealogical connections to the land and the dispossession of the Yarra and Ovens River peoples, Lesley Head shows the power of understanding the details of specific tracts of land. In so doing, she demonstrates that neither Aboriginal nor European Australian history benefits from being seen in simplistic terms.

In Second Nature, she addresses questions of serious importance for the future of the Australian nation-state. The shrillness of contemporary debates about sorry business, reconciliation and treaties, continues to drown out Aboriginal voices (see the concept of ‘white noise’ p. 71). Despite providing instance after instance of shallowness of thought and the intractability of powerful interests, on both sides of such debates, Second Nature remains an optimistic book. Lesley Head holds out the possibility that multi-vocal Aboriginal voices will be heard, that we can break through the misleading imagery of environmental debates, that non-Aboriginal Australians can see themselves in historical terms (p. 217) and, in so doing, recognize that the Australian environment, both social and physical, represents nature transformed.

Although trained as a physical and a cultural geographer, Lesley Head holds an important place within the discipline of archaeology. She has participated in many of our discoveries and her work extends the richness of our conceptual discussions. Though Second Nature is aimed towards a wider audience it should find a distinguished place on our bookshelves, in our teaching reading lists, and, most importantly, in our discourse. I have reservations about the line-drawings, some of which are blurred and hard to read, but this concern is a minor one. Such reservations should not detract from the clarity of the writing and the high quality of the book overall.

Harry Allen
Review of 'Second Nature: The History and Implications of Australia as Aboriginal Landscape' by Lesley Head
December 2000
51
74
Book Reviews
Download
You must be a member to download the attachment ( Login / Sign up )