Review of ‘Scribes, Warriors and Kings, the City of Copan and the Ancient Maya’ by William L. Fash 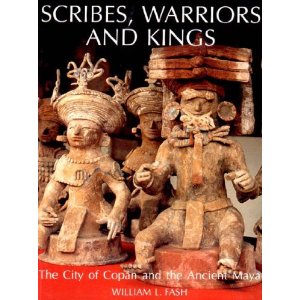 A series of archaeological projects since the mid-70s have made Copan (Honduras) the most investigated of all the Classic Maya sites. The progress in the interpretation of epigraphy and iconography has thrown a new light on the history of the site. No single researcher is more qualified than William L. Fash to write this work on Copan in the Thames and Hudson series, New Aspects of Antiquity. In fact, Fash has participated in every project there in the past two decades. The book is an excellent introduction to the archaeology of Copan and to the Maya Civilisation, of interest for both scholars and the general public. It takes us on an epic journey through time in nine chapters: the situation of the City in the Maya context (Chapter l), the description of the Copan Valley (Chapter 2), the history of explorations of the site (Chapter 3), the evolution of Copan from its formative beginnings to the advent of King Yax Kuk Mo (Chapter 4), its rise to statehood (Chapter 5), its florescence (Chapters 6, 7 and 8), and its collapse (Chapter 9).

Robert Carneiro long ago formulated his ‘circumscription theory’ which held that the smaller the area in which an agricultural society is established, the sooner social institutions will be developed to promote a hierarchy of economic and political power. As pointed out in Chapter 2, the: ‘geography setting makes Copan one of the easiest Maya sites with which to test the circumscription theory and other ecologically-based models for the explanation of culture change.’ (p.46).

From the very beginning however, Copan does not seem to follow that course. The society which lived in Copan around 800 BC had obviously a certain degree of social and economic organisation, as demonstrated by a cemetery which contained about 50 burials. Yet, from the archaeological record, it seems they fail to evolve towards a more complex socioeconomic system. Furthermore, when most of the Maya area is going through a boom period between 300 BC and AD 250, the Copan Valley did not appear to participate (Chapter 4); it is not before the 5th century that the first stelae are carved. At the same time, around AD 400, the charismatic leader, Yax Kuk Mo, appears on the scene. He is the founder of a dynasty which will bring a certain cohesion to Copan for four centuries, until around AD 800. Copan is regarded as a ‘chiefdom’ from AD 400 m 700, then as a ‘state’. Fash is aware of the danger inherent in these labels and uses them in a broad sense. Statehood occurred some time during the reign of three successive and outstanding leaders, Butz Chan, Smoke Imix and 18 Rabbit, who together reigned for 160 years – from AD 578 to 738. This is a period of both socio- political cohesion and expansion. The early 8th century sees the peak of Copan. The death of 18 Rabbit (he was defeated by his rival, Cauac Sky, of Quirigua) is a turning point in the fortunes of the dynasty.

The arguments are convincing that the dynasty had lost prestige and had to decentralise the decision-making process, but the case for the Popol Na (Assembly of People) still needs to be proven. The Chapter on Yax Pac is probably the best part. Fash gives a vivid account of the trouble of this last King of the dynasty. Yax Pac, like his predecessors, placed himself at the centre of the universe, but he had to rely heavily on his two brothers and his courtiers to keep the political cohesion of the kingdom. Yet his delegation of power and his friendliness towards his subordinates did not prevent the demise of the dynasty.

The Maya collapse has fascinated scholars and the public for decades. Here is an effort to put the record straight, at least as far as Copan is concerned. Fash argues that conflict amongst the elite combined with a decline of resources (the former possibly a consequence of the latter) led to their eventual demise. In such a cosmopolitan place like Copan at the edge of the Maya area, the conflict between elite might also have been of an inter-ethnic nature. The last inscribed monument bears the date, 10th February, 822, and refers to ‘U Cit Tok’ who tried, without success, to establish another dynasty. The Copan pocket may still have been occupied for some time after the collapse of the central power but a demographic decline brought the activity to an end.

The text is well written and perfectly articulated, with excellent illustrations (except for Photo 92 which is out of focus in this paperback edition). Sometimes, the author is carried away in the use of superlatives by his enthusiasm about Copin (e.g. ‘the world’s largest Jaguar nolac visage’, [p.170]). Also, Fash appears more at ease with the archaeological record than with ethnohistorical sources which seem to be too readily accepted. The latter point is underlined by a confusion in the name of Bernardino de Sahagun (p.120). Such tiny flaws, however, do not mask the elegance of the arguments where every interpretation is carefully based on a con- junctive approach combining material culture, ethno-historic sources, epigraphy and iconography.

If there is any problem with the book it is that some interpretation has become out-dated as research has continued apace at Copan since the manuscript was written. But this is hardly the fault of Fash, who is to be commended for considering it necessary to provide a short update (p.8) for this paperback edition (which is only two years later than the hardback). Amongst the recent progress is the picture of Copan before Yax Kuk Mo, which is changing in the light of recent work by the University of Queensland since 1992. It appears that there has been a continuity and steady growth in the occupation of the valley from 1000 BC to the advent of the dynasty, and Copan might have participated in the Late Preclassic boom in a role more active than previously thought. In any case, the Protoclassic transition (AD 100 to 250) is not confirmed at Copan, and it is during that transition that a Maya influence infiltrated Copan, indicating that the date AD 159, possibly associated with the foundation of Copan as a political entity (pp.74, 86-7), might be legitimate. The Early Classic (AD 250 to 400) also indicates a Maya input from the Highlands. Throughout the Classic period ceramic assemblages show evidence of a cosmopolitan society. How integrated were the ethnic components of the City? The expansion of Copan during the 7th century added pressure to the cohesion of all those components, which eventually led to rivalries of which the war between Copan and Quirigua could constitute the most dramatic expression. The defeat of 18 Rabbit was the turning point. After 738, the decline is irreversible, and the collapse of the political consensus is its inevitable consequence. There is still a controversy, not mentioned by Fash, on the aftermath of the collapse. On the one hand, obsidian hydration dates tend to indicate a progressive demographic decline over 400 years until at least 1200, on the other hand, ceramic evidence tends to indicate a rapid decline over 100 years at most, even if there was still some sporadic activity until 1000 at the latest.

All in all, Fash has to be congratulated for producing a fascinating and well-researched book on Copan that we are sure will stand as a classic – a work to be read by all students of Maya as well as the general public.

Veil, R and J. Hall
Review of 'Scribes, Warriors and Kings, the City of Copan and the Ancient Maya’ by William L. Fash
June 1996
42
71–72
Book Reviews
Download
You must be a member to download the attachment ( Login / Sign up )