Review of ‘Returning to nothing: The meaning of lost places’ by Peter Read 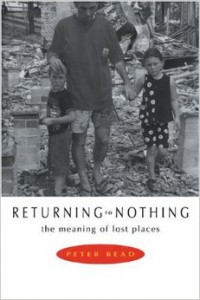 Peter Read’s new book, Returning to Nothing deals with an issue of universal importance: the meaning of place. The book considers the concept of place as a repository of history and sentiment, and as an inextricable part of the construction of human identity. Focusing on the myriad relationships between people and places, it shows how the severance of these ties represents a loss that both traumatises and bereaves.

Returning to Nothing explores a number of ‘lost places’: pastoral stations handed on to other generations or lost to national parks; the far-off homelands of refugees fleeing from war; towns flooded in the construction of reservoirs. It also deals with accounts of homes consumed by bushfires; a lake drowned by the construction of a dam; the destruction of Darwin in the cyclone of 1974; and the razing of whole neighbourhoods for road development.

Weaving an intelligent and well-informed discussion with a series of compelling first-hand accounts, Read explores many of the issues involved. He opens the discussion with philosopher Gaston Bachelard’s assertion that all inhabited space bears the essence of ‘home’ for human beings, or as Read says (p.2), ‘Humans … are able and feel the necessity to t u n space into place, to identify a site as being in some way different from another site, to erect mental boundaries around it, to live or work in it, to call it home.’

How they go about this, he maintains, is partly constructed to suit their individual needs, but also according to the organisational principles of their culture, its group dynamics, ideologies, institutions and values.

Read gives strong support to his arguments with a plethora of historical examples, including ancient Roman attachments to land, the ‘lost places’ in the Domesday Book, and a tragic tale from 1489 in which eighty people were evicted from their homes to go ‘sorrowfully away into idleness: to drag out a miserable life and – truthfully – so to die in misery’ (p. 18).

Read’s willingness to acknowledge culture as central to the interaction between people and place enables him to frame his informants’ accounts with a cultural context, and so to recognise some of the critical differences between Aboriginal and white Australian relationships with place, as well as their areas of common ground. It also allows him to consider the interplay between different sub-cultural groups, such as farming communities and conservationists, and their relationships with the wider national community and its political structures. In addition the book deals briefly, and somewhat tentatively, with issues of gender and space, and the differing relationships that men and women have with the places that they inhabit. Inevitably, each of these discussions is somewhat politically fraught: though Read gives some space to consideration of Aboriginal attachment to land, his major focus is on the previously less explored attachments of white Australians. He deals with this issue sensibly, but given Australia’s bitter and continuing conflicts over land rights, one has to wonder whether all readers of his book will be so even-handed.

As well as exploring particular attachments to place, the book also considers wider environmental issues, western cultures’ abstract visions of wilderness and ‘nature’, and the ways in which places are contested and reformulated to represent cultural as well as personal identity and values. In Read’s view, some of the west’s dominant cultural forms, for example its religious and economic practices, have contributed to the perceived alienation from place which has been a persistent theme in Australia’s colonial history. However, throughout the book, the many heartfelt descriptions of the effects of loss, whether of homes or other loved places, support his argument that attachment to place is a universal human need, a process that will not be denied however nomadic people become.

The book therefore offers considerable insight into some of the hidden emotional costs of modem life, and picks up on some of the issues raised by Berger and Luckman in the 1960s and 70s, questioning the value of westerners’ assumed luxury of ‘mobility’ and transience. It also raises important questions about why, thirty years on, attachment to place is still largely excluded from discourse about heritage, from environmental assessments and from most areas of public policy. The book makes it plain that the feelings engendered by the loss of place can be equated with those experienced in the loss of a close relative, friend or partner. This straightforward analogy helps to make visible the symbolic role of place in enabling human beings to confront issues of mortality. This and the other myriad meanings of place have been explored previously by anthropologists and historians (Agnew and Duncan 1989; Gans 1991; Massey 1992; Morphy 1993; Myers 1986; Searnon and Mugerauer 1989; Seddon 1972; Strang 1997; Tuan 1979). Other writers have dealt with the complementary meanings of material culture (e.g. Appadurai 1986; Miller 1987) but Read’s well-written and accessible account of human attachments to ‘lost places’ will doubtless encourage further research into this important area.

Morphy,H. 1993 Colonialism, history and the construction of place: The politics of landscape in northern Australia. In B. Bender (ed.) Landscape, Politics and Perspectives, pp.205-43. Providence: Berg.

Strang, V.
Review of ‘Returning to nothing: The meaning of lost places’ by Peter Read
June 1997
44
72–73
Book Reviews
Download
You must be a member to download the attachment ( Login / Sign up )