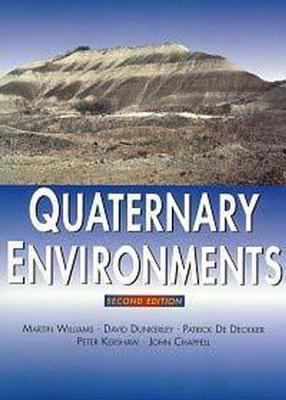 Quaternary Environments was first published in 1993 by Edward Arnold with a reprint in 1994. After using the first edition for a number of years as the standard text for undergraduate topics in environmental archaeology and Quaternary ecology, I provided an initial review of the book that was published in Australian Archaeology 48 (1999).

As the book provides a clear overview of the key types of evidence employed to reconstruct global and regional environmental changes associated with the series of glacial and interglacial periods of the past 2 million years, it offers an excellent background text for university students. In addition, the text uses examples from every continent, including Antarctica, and illustrates key concepts with a range of maps, diagrams, and photographs. Furthermore, relevant events during the preceding Tertiary are addressed in relation to changes in Quaternary climate, vegetation, and prehistoric human adaptations. Finally, models developed from past environmental change are offered as a means to predict future climatic and ecological conditions.

The second edition follows the same general chapter outline as the first edition with an expansion of Chapter 3 ‘Quaternary Glaciations’ into three separate chapters. The use of a larger paper size improves the integration of text and illustrations, and additional maps, photographs, diagrams and tables are employed to address the updated and expanded subject matter. The reference section has been updated and expanded substantially. Recent developments in chronometric dating have necessitated a new appendix summarising key dating methods employed in Quaternary research.

The chapter outline of the second edition is:

Chapter 2: Prelude to the Quaternary

Chapter 7: Evidence from the Oceans Chapter 8: Rivers, Lakes and Groundwater

Chapter 9: Evidence from the Deserts

Chapter 12: Atmospheric Circulation during the Quaternary

Chapter I offers a detailed summary of the aims of the text and chapter contents. In addition, it provides a basic introduction to Quaternary chronology, environmental reconstruction, and the practical relevance of Quaternary research. The chapter concludes with a list of related publications in the general area of Quaternary environments.

There has been minimal change to Chapter 2. This chapter addresses the relationships between global tectonic events of the Tertiary and major regional episodes including the Himalayan uplift, North American ice sheet accumulation, and the expansion of savanna relative to tropical rainforest.

As indicated previously, the section of the text addressing Quaternary glaciations has been revised substantially by expansion of the former Chapter 3 into three chapters. Chapter 3 provides a detailed examination of major ice sheet build-up in the Northern Hemisphere as a case study of the characteristic process of slow ice accumulation to glacial maxima followed by rapid ice melting and sea level rise. A brief comparison is then made with glacial cycles in the Southern Hemisphere. Finally, the variety of environmental evidence that can be obtained from ice core records is reviewed. Chapter 4 explores various hypotheses to account for the occurrence of major glacial and deglacial episodes during the Quaternary. Variables such as changes in solar radiation, oceanic circulation, and atmospheric concentrations of greenhouse gases (nitrous oxide, methane, carbon dioxide, water vapour) are considered. Chapter 5 addresses the longer-term rhythm of glacial cycles by exploring effects of variations in the Earth’s orbit, i.e. the Milankovitch theory of palaeoclimates.

Chapter 6 reviews the various mechanisms responsible for changes in global and regional sea levels. These include 1) changes in the volume of ocean basins related to tectonic activity or sedimentation, 2) changes in water availability related to cycles of glacial ice accumulation and melting, and 3) redistribution of mass among the ocean basins and the continents (subsidence and uplift) in response to changes in the weight of extensive ice sheets. The chapter concludes by providing a brief history of sea level fluctuations during the Tertiary, Quaternary, Holocene, Recent and Historic periods.

Chapter 7 addresses the reconstruction of past ocean water temperature and salinity, ice volume, sea levels, and continental climate from analyses of calcareous benthic and planktonic foraminifera, coral, and aeolian dust and pollen. Deep sea cores and ice cores provide long-term sequences of oxygen isotope data that can be employed to address the magnitude and timing of glacial cycles in various regions of the earth. Oxygen isotope analyses of foraminifera and ice complement traditional sedimentological and microfossil studies.

Chapter 8 focuses on changes to local and regional terrestrial landscapes as reflected in variations in sediments deposited by rivers and lakes in response to changing evaporation, precipitation and groundwater regimes. In addition, palaeoecological inferences from fossil aquatic organisms (diatoms, ostracods, gastropods, molluscs) are addressed. Case studies include the Nile, Amazon, and Murray-Murimmbidgee-Darling (Australia) river systems and a range of large and small lakes demonstrating various formation processes.

As periods of cold temperature associated with glacial maxima are correlated with terrestrial aridity and desert expansion, studies of desert landforms provide important information about changes in past global and regional climates. Chapter 9 addresses geomorphological studies of desert landforms and associated invertebrate and vertebrate fossils as a means to reconstruct aridity. A new section reviewing research with Quaternary palaeosols including a case study of the loess sequence in China is included.

Chapter 10 summarises environmental evidence derived from analyses of terrestrial plant and animal remains (microfossils and macrofossils). A standardised method of sediment description is provided in relation to sediment core correlation and palaeoecological interpretations employing sediment cores. A new section on plant phytoliths is included and the former section addressing plant macrofossils derived from pack rat middens is expanded to discuss similar middens produced by hyraxes in Africa and stick-nest rats in Australia.

Chapter 11 discusses relationships between changes in local and regional habitats and the evolution of Miocene hominoids (Gigantopithecus, Ramapithecus) and Plio-Pleistocene hominids (Australopithecus, Homo). Hominid biological and cultural evolution from 4.5 million years ago to the Neolithic is reviewed in a dynamic context involving biological, social-cultural, economic, technological and environmental variables. Various sections are updated to address recent hominid fossil evidence. In relation to explanations for spatial and temporal variability in Pleistocene fauna1 extinctions, the authors support the use of more complex and multi-causal models employing climate variability, changes in vegetation distribution and abundance, and human agencies including hunting, burning and deforestation.

Chapter 12 addresses changes in global atmospheric circulation patterns during the late Quaternary. As the most complete palaeoclimatic evidence is restricted to the past 20,000 years and this period includes climatic extremes, a glacial maximum at ca. 18 ka BP and the early Holocene ‘climatic optimum’ at ca. 9 ka BP, this time period is employed to test global atmospheric circulation models. These models involve dynamic relationships between ocean, atmosphere and land. Comparisons are made with reconstructions provided by models derived from the CLIMAP and COHMAP projects.

Chapter 13 discusses recent impacts of human behaviour on the natural environment. The authors argue that human impacts on the global climate system have increased dramatically following the domestication of plants and animals in the early Holocene. Land clearance, cultivation, overgrazing, increased sedentism and population growth led to greater soil erosion and nutrient depletion, desertification, salinisation, water pollution and loss of native flora and fauna. These impacts have been’ more severe since the Industrial Revolution and affected a wider range of habitats and ecosystems including the global atmosphere. Atmospheric, marine and terrestrial pollution and deforestation have been accelerated significantly in recent years. The chapter concludes with a range of recommendations to counteract these detrimental environmental changes.

The Appendix has been revised substantially to address recent developments in Quaternary dating methods. It focuses on radiocarbon (conventional and AMS), thermoluminescence (TL), optically stimulated luminescence (OSL), and selected uranium-series methods. In addition, a brief overview of potassium-argon (K-Ar), electron spin resonance (ESR), amino acid racemization (AAR) and palaeomagnetism are provided. Other dating methods used in Quaternary research, such as fission track, obsidian hydration and various chemical techniques are not discussed but references are provided. Thus, the Appendix provides a good basic introduction to key dating methods with references to more specialised texts for those who desire more detail.

In conclusion, the second edition of Quaternary Environments provides an updated version of an excellent undergraduate level text book with an improved larger format. It offers an authoritative overview of the core theories and methods employed in Quaternary environmental reconstruction, including case studies from various regions of the world. Rather than attempting to cover the entire range of environmental processes and analytical methods, the authors focus on key concepts and techniques. Complex concepts and methods are presented in a clear manner, and a large number of relevant illustrations and photographs are employed to demonstrate principles and improve understanding. As indicated in my review of the first edition, the primary strength of the volume is its ability to present dynamic processes in a simple yet comprehensive format. Although the book does not focus on Australian environmental reconstruction, it provides a sound understanding of the principles and methods that can be employed by archaeologists and environmental scientists in Australia.