Review of ‘Pictures Of Time Beneath: Science, Heritage And The Uses Of The Deep Past’ by Kirsty Douglas 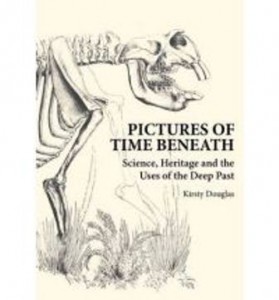 In spite of a 19-page introduction, it is only on the last page of the book that Kirsty Douglas gives a clear idea of what its aim is:

My aim has been to explore ideas about age in the landscape since the earliest public European acknowledgement of deep time in Australia, with the announcement of the Wellington Caves fossil discoveries in 1830. My major focus has been on the stories of discovery, interpretation, mobilisation and celebration of that deep past by geologists, palaeontologists, archaeologists, museum workers and their publics in the 170 years since then. This is an account of the development of the significance of the deep past in Australia through the emergence of particular deep-time places into the realm of heritage, and thereby into regional, national and international frameworks of heritage recognition … Schama’s claim … that the overwhelming rhetorical appeal of national identity is located in the ‘mystique of a particular landscape tradition’ is given weight by the attachment of Australians and popular media to deep-time objects and landscapes which become repositories for regional and national stories. Earth scientists and the popularisation of geology play an integral role in the creation and nurturing of Australian national or regional identities, through the use of the material remains of former worlds to transform country into a four-dimensional, timetravelling entity with a deep future as well as a deep past (p.171).

This quotation also gives an example of Douglas’s style of writing. The book is the published version of her PhD thesis, completed in the History Department of the Australian National University in 2004. Whilst publication of PhD theses is a useful service, CSIRO Publishing should remember that such theses are addressed to academe rather than the general public and need thorough editing and updating to make them accessible and valuable to general readers or even to undergraduates.

The title of Douglas’s PhD thesis differs slightly but significantly from the book title, ‘Science, Landscape, Heritage and the uses of the Deep Past in Australia, 1830–2003’. The addition of the dates makes it clear that this is a study of the history of ideas over a fixed period and the addition of landscape shows that her field of study is even broader than the book title suggests.

Pictures of Time Beneath examines three celebrated heritage landscapes – Hallett Cove south of Adelaide, Lake Callabonna in the far north of South Australia and the World Heritage-listed Willandra Lakes region in western New South Wales. These are very different places – Hallett Cove is a geological site, Lake Callabonna palaeontological and the Willandra has both cultural and natural significance.

I found Part 1 dealing with Hallett Cove the least satisfactory part of the book. It describes the story of the site’s discovery, geological significance and the fight for its conservation but, oddly, the story stops in the 1970s. There is nothing about modern heritage management or the modern interpretation of the site in spite of the claim on the book’s back cover that ‘it offers philosophical insights into significant issues of heritage management’.

Douglas has a background in geology and provides useful information about the site’s geological history but not on how adequately it is interpreted to the public nowadays (it is unclear how her ‘panels’ relate to modern interpretation of the site). More seriously, she seems unaware of its archaeological importance. Although she refers to Norman Tindale several times, there is no mention that much of Tindale’s interest in preserving the site sprang from the Aboriginal campsite overlooking the beach where 400 large Kartan stone tools were found by Cooper and Tindale from the 1930s onwards. These are now housed (and I hope displayed) in the South Australian Museum and are thought to be amongst the oldest tools in Australia.

Part 2 describes the discovery of Diprotodon and other fossil fauna at Lake Callabonna south of Lake Eyre. Again the focus is on the story of the discoverers and scientists involved and not on the significance of the site itself for palaeoclimatologists and for archaeologists debating the causes of megafaunal extinction. One of the most important finds at Lake Callabonna was what Diprotodon was eating 70,000 years ago (saltbush was the main ingredient of stomach contents) but again this is not mentioned. Nor is it clear where further information on the site is available or what interpretation, if any, is on site. It is easy to say that it is all on the web but Googling produced a most peculiar entry in German on Wikpedia and otherwise little more than the holdings of Diprotodon skeletons and casts in museums. In the past I found the Australian Museum one of the better sources of information, but may I plead with the South Australian Museum and South Australian heritage authorities to put a decent entry into Wikpedia covering the site’s significance, accessibility and interpretation.

The third part of the book is devoted to ‘Lake Mungo, human antiquity and the watered inland: Reading the scripture of the landscape’. This is more satisfactory because Douglas acknowledges that it was Jim Bowler ‘who set me on this course’ (p.vii), and she also had contact with several of the archaeologists who established the site’s World Heritage significance. She describes the story of Mungo from 1969 to 2003 and briefly rehearses some of the debates around the human remains and topics such as reburial and repatriation. However, those who wish to learn about Mungo may do better to read Mungo over Millennia: The Willandra Landscape and its People, (edited by Helen Lawrence, Maygog Publishing , Hobart 2006, reviewed in AA68:65-66 in 2009) because it is more up-to-date and gives a voice to local Traditional Owners.

Pictures of Time Beneath is in essence a history of scientific ideas and may provide a useful introduction to historians, geologists and other academics, especially those from overseas, wanting to familiarise themselves with ‘the way landscapes and landforms are interpreted to realise certain visions of the land, the nation and the past in the context of contemporary notions of geological heritage, cultural property, cultural identity and antiquity’ (back cover). However, its steep price will put it out of the reach of most students and, as a little-edited PhD thesis, it is unlikely to appeal to many of the general public but hopefully it will be available in libraries.

Finally, I must take issue with the publishers (CSIRO Publishing) for the very poor quality of the illustrations. There are no colour plates but only monochromes. This would not be a problem except that high quality original black and white photographs seem to have been simply scanned on a photocopier. This poor reproduction is particularly unfortunate in a book dealing with heritage landscapes. Surely in this technological age CSIRO can do better than this?

Josephine M. Flood
Review of ‘Pictures Of Time Beneath: Science, Heritage And The Uses Of The Deep Past’ by Kirsty Douglas
June 2011
72
51-82
Book Reviews
You must be a member to download the attachment ( Login / Sign up )