Review of ‘Object Lessons: Archaeology and Heritage in Australia’ edited by Jane Lydon and Tracey Ireland 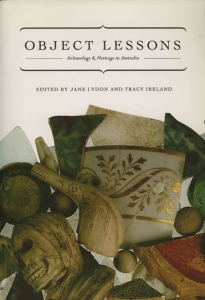 Many Australian archaeologists find employment and careers in the world of heritage conservation and management and Australian heritage practices are well regarded internationally. However, heritage has attracted little research attention in Australia and few publications consider heritage beyond the confines of government process and legislation. This volume of edited papers by Jane Lydon and Tracy Ireland endeavours to address this deficiency and is a welcome addition to the Australian heritage literature.

Object Lessons is shaped by the archaeological perspectives of the majority of its contributors. This positions the volume slightly differently from some of the international literature where disciplines such as geography and anthropology have greater influence in heritage studies. The focus on archaeology is appropriate to the Australian context where heritage practices are principally shaped by this discipline. Nevertheless, the introduction makes reference to an extensive international literature and considers the local implications or focus of these issues in Australia. The inclusion of the few non-archaeological perspectives is refreshing and signals a shift in approaches to heritage research in Australia.

The volume comprises 14 chapters, including the introduction in which Lydon and Ireland construct problematised contexts for the remaining contributions. This provides a broad scholarly context for the varied case studies drawn from a broad geographic range within Australia. The title of the book, while a deliberate pun, suggests a greater focus on objects than is perhaps the case. The volume is most interesting for its focus on the ways in which heritage is perceived and misconceived, used and misused. It is these arguments and type of thinking that strongly link the varied contributions, and place the book in a unique position in the Australian literature.

The selection of papers is effective. The case studies are distinct and yet share enough common themes to allow each of the contributions to complement one another. The volume is also made relevant to a broad archaeological and heritage readership because of the diversity of site types considered. The case studies include Aboriginal prehistoric sites, contact sites, historic sites, shipwrecks, memorials and the hyperreal. The contributions from a range of scholars and practitioners including both established and early career Australian archaeologists provide a spread of experience and fresh approaches. The attempt to retain balance is supported by the inclusion of two papers with maritime content, and is significant because maritime heritage is frequently separated administratively and technically from other archaeological and heritage studies. This is a theme taken up in a paper by Martin Gibbs which suggests maritime heritage research and practice lags behind developments in Indigenous and historical heritage conservation. This traditional Australian triumvirate of heritage and archaeological site types – the artificial categories of historic, Indigenous and maritime – is also challenged by other contributors. Ian Lilley’s paper suggests that historical archaeologists are making the greatest contribution to a reinvestigation of ideas about Aboriginal history, continuity and change, and suggests that prehistoric studies should move away from restrictive technical and functional explanations to embrace social models of change.

Although the diversity of case studies is commendable, the volume pays little attention to two notable themes in Australian heritage research. Individual papers in the volume make reference to non-British migrant heritage in Australia (e.g. Birch), but this is not strongly represented in the volume. Similarly, the increasing trend (and challenge) to link cultural and natural heritage is largely overlooked by the volume. However, the extraordinary example of the William Ricketts Sanctuary that forms the focus of Marcia Langton and Bruno David’s analysis of an ‘imaginary, and yet hyperreal, Dream Time’ does partly address this question. Langton and David point to the crisis of identity and the links of primitivism and nature that have persistent ramifications for a distinctly Australian conception of people and land. Their unusual example goes to the heart of the issues of how culture and history are monumentalised and frozen through heritage practices – a theme that is followed in several papers in the volume.

Tracy Ireland identifies heritage as an arena in which the public can argue out the relative worth of its national myths. She makes the important point that archaeological relics and physical remains are always interpreted; that there is no intrinsic worth to the materials we recover. Instead they are interpreted for the present. In a similar vein, Tony Birch identifies the practice of selective (re)presentation of the past. He uses the site of Stieglitz to examine how particular histories are privileged in the presentation of the past through heritage sites. He points to the erasures and inventions that are used to deny and reinstate particular aspects of Australia’s past to present the dominant and privileged view of colonial stories at the expense of Indigenous and non-British migrant histories.

As a complement to this position, Jane Lydon demonstrates how shifting public perception is reflected in heritage management processes. She uses the case of the Blacktown Native Institution to show how increased public awareness of the Aboriginal stolen generations, and a public interest in reconciliation, has shifted attention away from colonial representations of the site’s history to a much greater interest in Aboriginal perspectives and experiences of the institution. Similarly Richard Mackay’s contribution considers how the conservation of Mawson’s Hut has moved from a focus on fabric to a much greater concern with social values. Interestingly, the concluding chapter by Sharon Sullivan suggests that this is particular to the Australian context. Sullivan’s case study is the only non-Australian example in the book, but one which is nevertheless rooted in Australian heritage practice. She describes the development of a conservation charter for China based on and informed by the Australian Burra Charter. Sullivan places this in the context of understanding how the Burra Charter was itself a response to particular Australian circumstances. In particular she considers how social significance has grown into an important aspect of heritage assessment in Australia, but which was not formally adopted in the Chinese context. The question of social significance is also interesting in relation to Mawson’s Hut and underwater sites. Both Mackay and Gibbs suggest that the physical inaccessibility of such remote sites raises questions about the way heritage is perceived. As these sites can only ever be experienced by a select few, their broader significance rests in how heritage is imagined and mythologised.

Myth-making is a strong theme throughout the volume, both for its positive and negative implications. Several papers point to the problematic implications that arise from myth creation. In particular there is concern for the impacts on everyday lives of particular groups and the contestation and conflict that can arise. Siobhan Lavelle’s paper on the strong mythologising surrounding the European exploration of the Blue Mountains demonstrates how ideas become enshrined in the popular consciousness and how some stories are privileged over others. Similarly Lilley’s paper articulates how myths and conceptions of Aboriginal people and culture as unchanging have great currency in the public mind, in spite of decades of archaeological research that points to change as well as continuity. He suggests that such preconceptions have negative implications for contemporary issues such as Native Title.

Several contributions (including Casey, Ireland, Lavelle, Lilley, Mackay and Murray) suggest that there is a division between the elite or scientific views of archaeologists and heritage practitioners and the general public. Both Mary Casey and Lilley challenge archaeologists to engage with these problems and to communicate more effectively and appropriately. Casey also makes the point that archaeology offers an alternative and more dynamic way to view the past than commonly represented through heritage. Tim Murray similarly suggests that such research can inform a complex presentation of the past to capture the interest of diverse groups. However, the paper by Birch reminds us of the complexity and difficulty in effectively representing such diversity, including the inherent difficulties of making Aboriginal sites, especially prehistoric archaeological remains, attractive to visitors with particular European aesthetic sensibilities.

The contribution by Birch and that of Clarke and Faulkner embrace their own experiences of heritage sites to provide reflective and personalised case studies. These narratives of engagement with heritage sites and landscapes further contribute to the liveliness of the volume. Anne Clarke and Patrick Faulkner’s paper takes a new look at community archaeology – typically seen as an opportunity to empower communities in shaping the design and implementation of research projects – to consider how researchers themselves come to experience, know and live through such community experiences. They identify how we write our own sense of place on the landscape. A similar theme is explored by Rodney Harrison in considering how archaeological fieldwork both shapes and is shaped by Aboriginal notions of the past. As with other kinds of heritage, Harrison suggests that collaborative archaeological research reflects present-day relationships between people and place and a particular articulation of the past by local Aboriginal people.

Together these case studies link the dynamics of contemporary politics, multiple meanings and conflict to challenge static views of the past. On the whole the papers in the volume are written in an engaging way with captivating case studies. The volume draws together some inspirational and aspirational positions and thoughts about heritage in Australia. While these are not groundbreaking in every instance, they are certainly optimistic about where heritage research and practice might be, and where it might go in future. The suggestion that policies increasingly treat heritage as social process may well reflect the authors’ own positions, rather than the more mundane and unquestioned practices of many Australian heritage agencies. Any questions raised by the introduction are more than addressed by the balance of the volume and the quality of the contributions. As such it provides a much needed starting point for a more enlightened view of heritage practices in Australia, and hopefully the beginning of more critical conversations among heritage practitioners and researchers. The book will be a good basis for collegial and classroom debates and is recommended for students, researchers, teachers and practitioners interested in heritage conservation.

Celmara Pocock
Review of ‘Object Lessons: Archaeology and Heritage in Australia’ edited by Jane Lydon and Tracey Ireland
December 2006
63
65-67
Book Reviews
You must be a member to download the attachment ( Login / Sign up )