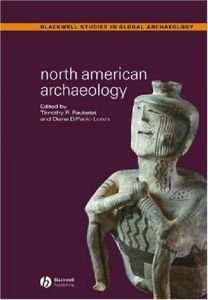 This volume is the fifth book in Blackwell’s global archaeology series, a regional synthesis designed to cover central areas for higher-level undergraduate archaeological teaching (another is Ian Lilley’s 2006 Archaeology of Oceania: Australia and the Pacific Islands). The book brings together a range of papers from somewhat disparate regions and periods to provide an interesting, but problematic, version of American prehistory (read United States of America as the regions that are now Canada and Mexico are forgotten). The goal of Pauketat and DiPaolo, like many recent volumes, is to stress that there are multiple approaches and meanings of understanding the past and as such there are no right or wrong answers.

North American Archaeology commences with a surprisingly lengthy introduction arguing for a post-modern perspective on the past with more ‘fluid’ conceptions of culture and rejections of ‘New’ and ‘behavioural’ archaeology. Pauketat and DiPaolo launch an attack on ‘new archaeology’ labelling it the ‘new religion’ of the 1960s (p.11) and rejecting their emphasis on behaviour and later developments from the likes of Schiffer and ‘his band of … students and cronies’ (p.12). Instead of evolutionary and behavioural explanatory frameworks they offer ‘alternative histories’ and point to another ‘all-important development in North American Archaeology’ (p.12); cultural resource management and Pauketat’s own work.

The early archaic section of the book consists of five papers, but with a bias on the final few thousand years. Adovasio and Pedler provide a background paper to colonisation, whilst the remainder provide specific regional studies; Ames the west and northwest coast (four case studies spanning 12,000 years), Sassaman looks at the southeast (10,000–3,000 BP), Dancey revisits the famous Hopewell complex in Ohio (c.200 BC–AD 400), and Chilton looks at the apparently often ignored northeast New England region during the Late Woodland Period (AD 1000–1600). Immediately apparent in this section of the book is a real lack of early work and a dearth of lithic-related research. There are but fleeting mentions of the likes of Clovis and Folsom and nothing here for a student interested in lithic analysis and Pleistocene archaeology.

Adovasio and Pedler’s paper sits alone from the others in this section, providing a detailed synthesis of the issues surrounding colonisation of North America; who, when and how from which many parallels with our own Australian arguments can be drawn. There are no great surprises to where Adovasio sits in this debate with clear support for Asian origins, a pre-Clovis date for settlement based on the Medowcroft data and an argument against any kind of blitzkrieg of megafauna (contra Martin 1967; cf Meltzer 1988). What is interesting is the discussion of mechanisms and particularly the use of boats to reach unglaciated North America which would confine the ‘whole discussion of the timing and exposure of a land bridge (into North America) as a moot point’ (p.43).

In Chapters 7–10 the large-scale sedentary societies of the central and southern regions of North America dominate. Henning (Chapter 7) provides a detailed chronological analysis of the Great PlainsVillage tradition (AD 850–1700). Pauketat (Chapter 8) provides an almost overwhelming amount of data examining differences between Mississippian polities. Hegmon (Chapter 9) looks at the reasons for the emergence of elites in the southwest (Ancestral Pueblo and Hohokam), and Lekson examines the Chaco and Paquime cultures of the southwest (Chapter 10). This section of the book sits together much better than the archaic, providing interesting and compelling background papers for the target reader, although the weight of some case studies and narrative histories is so overwhelming in places that it appears authors have condensed an entire thesis into a research paper.

The final five papers in North American Archaeology cover most of the major themes of American historical archaeology. Silliman (Chapter 11) provides an excellent review the history and themes of culture contact studies. DiPaolo (Chapter 12) examines processes of creolisation during the seventeenth and eighteenth centuries. Singleton (Chapter 13) looks at African American identity formation on the United States east coast during the eighteenth century. Watkins (Chapter 14) lists the history of the politics of repatriation in the United States that includes a brief discussion of Kennewick Man and Saitta (Chapter 15) provides a discussion of labour and class in the early twentieth century. There is nothing new in this final part of North American Archaeology, but the articles do provide strong starting points for students of historical archaeology and are pertinent to those studying Australian history.

North American Archaeology generally achieves its aims; it is an easy read and explains many key concepts in an approachable way for upper level students. The post-modern and sometimes Marxist approach of the book is unsurprisingly better applied to the later period historical studies, whist the arguments that largely reject behavioural explanations for the earlier archaic period papers are less convincing. Two critical issues weaken the volume significantly; a disregard of areas of North America other than the USA and an absence of research from colonisation until the late archaic. Perhaps there are just not enough post-processual lithic analysts out there?