Review of ‘Nonlinear Models for Archaeology and Anthropology: Continuing the Revolution’ edited by Christopher S. Beekman and William W. Baden 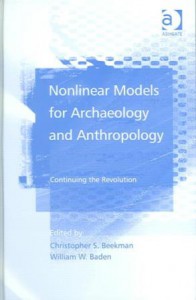 Nonlinear Models for Archaeology and Anthropology is an edited volume organised into eight chapters, with each of the papers illustrating the application of non-linear systems theory (i.e. complexity theory, chaos theory, dynamical systems etc) in what are mostly anthropological examples. The examples include exploring how human groups operate as ecaptive (rather than adaptive) systems; basic forms of underlying organisation (based on complexity theory) in different societies from kinship-based though to corporations; use of agent-based modelling of social dynamics in Pre-Columbian Western Mexico; using quasi-group formation to understand factional dynamics in Hopi villages; use of dissapative structures to explain Iroquoian maize agriculture; and using agent-based modelling to improve site catchment analysis. As you can already see, this is a jargon-loaded volume but, thankfully, for the most part, the jargon is well-explained within individual chapters, although it does make for hard going at times.

The editors of the volume describe the application of non-linear systems theory as a ‘revolution’ in the discipline of science, which it has been in some fields, but not universally so. For the social sciences, the editors argue that non-linear systems theory offers to help ‘rebuild after the devastating critiques of Post-Modernism’ (p.1). There really is no hiding their enthusiasm for this branch of theory. But on more than one occasion when working through the volume, I was left wondering whether this really constitutes a ‘theoretical revolution’, or whether what is really being promoted is just another rebadged theoretical vogue? My own reading of the philosophy of science is that the latter is more likely to be the case. Nonetheless, there are some very insightful approaches to tackling particular anthropological problems, but I wouldn’t see the body of theory as a solution to all our theoretical woes.

In its favour, the papers illustrate some very useful applications of how non-linear systems theory can provide a framework for describing the complexities of social dynamics. This is really where non-linear systems theory comes into its own. In particular, its most interesting application is in setting-up simulations of operating societies (or parts thereof), and using that as a test-bed for exploring the implications of theoretical statements about social processes. In this regard, there is great potential, as the contributing authors variously recognise, for non-linear systems theory to be used as a vehicle for integrating theoretical schools, and operationalising some of the tenets of post-processualism. It does this by breaking down the requirement of traditional taxonomic classifications, and permits much more complex interactions between data and theory. Gone are the days where theory is reworked to explain anomalous observations. The real advantage of complexity theory is its ability to not only explain anomalies, but even predict them.

There are similarly some good take-home theoretical points that emerge from the volume. These are that when studying social systems, and their archaeological implications, it is important to realise that there are inevitably a variety of processes operating at different scales (temporal, spatial and categorical) that affect the phenomena we observe. We often acknowledge this, but the difficulty is dealing with it in explanatory statements. The tendency is to focus on a single process and situate explanations in the context of that process, since our research has led to a better understanding of that process. Non-linear systems theory provides some hooks from which multiple processes can be situated relative to each other, and provides for more complex interactions than just simple cause and effect. Potentially, this should provide for more penetrating explanations of the past.

Despite this potential, however, there were two aspects of the volume that disappointed me. The first is that, despite the title, there really is very little application of non-linear systems theory to archaeological problems. Where the archaeology does get a mention, it is limited to providing the tangible evidence of the social processes that are the real focus of the volume. A related issue is that of the eight chapters in the volume, only one deals with middle-range societies, and even then relies heavily on historical data to explore group dynamics. Only at the very end of this chapter is there some discussion of the implications for archaeology. It would have been nice to see some application of non-linear systems theory to deriving statements about the past solely from archaeological data, if only to indicate the different insights it can provide. I can foresee that this body of theory could have very useful applications in Australian archaeology through the study of rock art, for example, as well as exploring the dynamics of stone artefact production and use. However, the application of non-linear systems theory to our discipline is still quite new, so hopefully this might be something we’ll see in the near future.

The second disappointment was that none of the papers in the volume explored the limitations of non-linear systems theory, or how it performs relative to existing theoretical approaches. There is a strong sense in the volume that the benefits of applying non-linear systems theory are self-evident, rather than needing to be established. Collectively, the papers in the volume do a good job of illustrating the advantages of this body of theory, but I was left wondering what the potential pitfalls are of applying it haphazardly. This might be forgiven in a volume that is trying enthusiastically to sell the ideas of a new theoretical approach for anthropology. But its take up more broadly would require this issue to be addressed specifically. Something that all the papers in the volume had in common, for example, was a high degree of reliance on ethnographic and historical data on social dynamics. Complex data lend themselves to complex explanations. If anything, this illustrates that it may not necessarily be straightforward to pick up non-linear systems theory and apply it in other contexts where there is greater time depth, or the data that is being worked upon is not so closely linked to its social context.

Overall this is an interesting, if somewhat difficult read owing to the amount of jargon. Certainly archaeologists who work closely with Aboriginal communities who maintain a rich source of traditional knowledge will be able to see the parallels with their own work. Potentially there are some very interesting applications for non-linear systems theory in Australian archaeology, especially rock art. I just hope that this doesn’t go the way of other theoretical vogues, which sees it applied simply because everyone else is doing it. Owing to the nature of complexity theory, there are certainly some traps for the unwary.

Mal Ridges
Review of ‘Nonlinear Models for Archaeology and Anthropology: Continuing the Revolution’ edited by Christopher S. Beekman and William W. Baden
December 2006
63
69-70
Book Reviews
You must be a member to download the attachment ( Login / Sign up )