Review of ‘Love’s Obsession: The Lives and Archaeology of Jim and Eve Stewart’ by Judy Powell 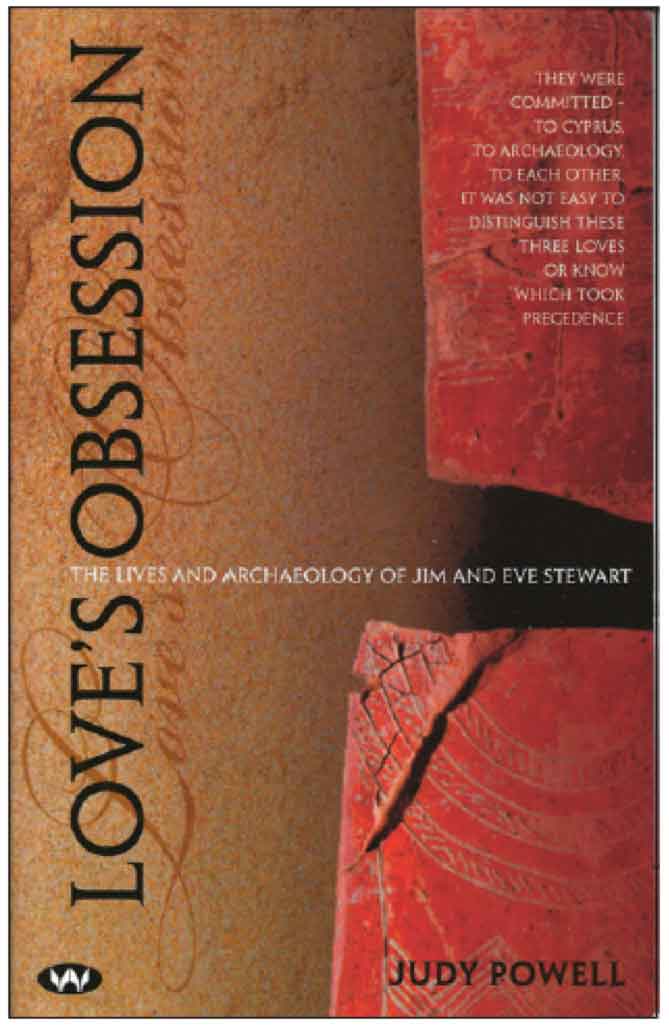 The 1930s were romantic times for archaeology. Vere Gordon Childe, Sir Leonard Woolley, Mortimer Wheeler and Sir Matthew Flinders Petrie cast long shadows over the profession, and archaeologists could still be seen hunched over maps in Baghdad coffee shops and Cairo tea houses. Sure, penicillin hadn’t been invented, but the line between looting and ‘collecting’ was broad, and a murky and wonderfully accommodating grey. Not surprisingly, in addition to the great Childe, Australian archaeologists were already in the mix through the 1930s and into the 1950s, learning their trade, honing their skills and, as it turns out, drinking a little too much and having affairs. What is surprising is that one of the most active and influential of these archaeologists— Jim Stewart—is little known today by Australia’s younger archaeologists. Judy Powell’s meticulously researched and elegantly written Love’s Obsession: The Lives and Archaeology of Jim and Eve Stewart is therefore an important and necessary corrective.

Jim Stewart was the first person to teach archaeology in a formal capacity at an Australian university. He was the foundation on which the Department of Archaeology at the University of Sydney was built. And he was the father of the Nicholson Museum. Many past and present students of archaeology at the University of Sydney will have passed the ghosts of Jim Stewart, and his wife Eve, in the corridors and cloisters. Powell’s biography puts flesh on their bones. The many Australian archaeologists with fond memories of field schools in Cyprus owe Jim Stewart a great debt of gratitude, which must also extend to his wives. In the late 1930s Stewart and his first wife Eleanor excavated the rich prehistoric Bronze Age cemeteries at Vounous on Cyprus’ north coast. This project was the first in a long line of Australian archaeological excavations on the island that extends to today.

After Jim divorced Eleanor, he married his lover—Eve Dray—also a fine archaeologist and (some argue) the ghost writer of her husband’s best work. Therefore, Love’s Obsession is not only a biography of Jim Stewart. Rather, it tells the story of both Jim and Eve, tracing their lives from their birth and childhood, to their studies at university, to when they met, became lovers and eventually married. Love’s Obsession also follows the Stewarts through Jim’s later career, which was characterised by both academic collaboration and bitter feuding, to Jim’s death and Eve’s productive widowhood, when she continued to exert some influence over the shape and proceedings of the expanding Department of Archaeology at the University of Sydney. Their relationship makes for an interesting and ultimately moving love story (although I would have liked to have known more about what became of Stewart’s first wife, Eleanor, who was also an accomplished archaeologist).

Interesting characters are not always likeable and Love’s Obsession presents Jim with all his personal weaknesses, as well as a few of Eve’s. Jim was capable of being irascible and loose with the truth, he could take credit where it belonged to others, and could make promises and not keep them. With Eve, the couple were a formidable pair, as Eve could also be uncompromising and critical. And ultimately, Jim cheated on his wife Eleanor with Eve, which will taint both Jim and Eve in the eyes of many readers. Anybody who has used Stewart’s typological system for the pottery of Cyprus’ prehistoric Bronze Age will not be surprised to learn that he could be pedantic. His typologies hint at an underlying obsessive compulsive disorder, some of which seems to have rubbed off on Eve. But there was no doubting Jim’s dedication to his craft. He spent most of World War II in a German POW camp where he continued his study of Cypriot prehistory in difficult conditions. When the war ended, he weighed just 38 kg but he was determined to return to excavate on Cyprus (some archaeologists who have worked on Cyprus more recently have left the island in a similar physical condition and just as determined to return).

It is entirely possible that there will be elders of our profession alive today who will not be too pleased with some aspects of Love’s Obsession—which is what makes the second half of the book such entertaining reading. It does not shy away from reporting the personal feuds and fierce intradepartmental wrangling of the early years of the Department of Archaeology at the University of Sydney. Based on numerous interviews and exhaustive archival research, Powell describes the jealousies and rivalries of prominent members of staff, their arguments and shenanigans.

Therefore, Love’s Obsession will be of particular interest to graduates of the University of Sydney who will recognise many of the names that feature in the chapters on the Department of Archaeology’s early years. Archaeologists who have worked on Cyprus, and who have been seduced by its romance, will also enjoy learning more about two of the profession’s founding fathers and mothers and their work on the island. Love’s Obsession is amusing, informative, engagingly written and scandalous without ever being prurient. Some readers might even end the book with a lump in their throats. They will certainly be better informed about two powerful forces in academic archaeology’s birth and early development in Australia.

Sneddon, A.
Review of ‘Love’s Obsession: The Lives and Archaeology of Jim and Eve Stewart’ by Judy Powell
December 2014
79
Book Reviews
Download
You must be a member to download the attachment ( Login / Sign up )