Review of ‘Late Holocene Indigenous Economies of the Tropical Australian Coast: An Archaeological Study of the Darwin Region’ by Patricia M. Bourke 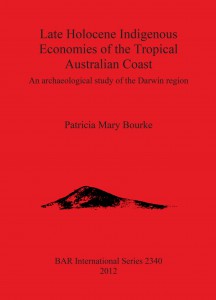 Data-rich, detailed site reports are never going to appeal to the general public, but they are the essential building blocks of local archaeologies, without which regional, continental and global syntheses cannot exist. It is unfortunate that university presses in general are turning away from being organs delivering basic knowledge to academic communities, and seeking to establish themselves more often as producers of academically informed, but not necessarily academic, books. In the present instance, this monograph is the published version of a PhD thesis submitted in 2000. The British Archaeological Reports (BAR) series provides a good service in publishing such works, although it does have a certain reputation for unrefereed and unedited editions—useful, indeed essential, but not necessarily elegant offerings. Bourke’s volume typically provides basic archaeological information, informed by not just detailed analysis but also thoughtful interpretations, but it would have benefitted from a heavier editorial hand.

The subject matter is Bourke’s survey and excavation of sites in the region of Darwin in northern Australia, mostly shell ‘middens’ of one sort or another, which are aged within the last 2000 or so years. Some of these are of the large mounded kind, better known perhaps from the eastern coast. The basic data sets are sites on Middle Arm, a peninsula within Darwin Harbour, and around the adjacent embayment, Hope Inlet.

In the introduction, Bourke provides a snappy account of previous research (p.1), then muddies the waters with a far-too-detailed paragraph on Anadara (which might be considered the protagonist of her thesis), that would have been better positioned later in the book. She then lists her aims and ‘specific objectives’, but these are vague, inductive and not really specific at all. A useful introduction to the study area and the ‘context of the research’, with an interesting sidelight on the tribulations of working in a tropical climate (p.2) are, however, followed by a cogent discussion of previous research and current ideas which generate far more interesting and engaging aims and objectives. A brief discussion of the ‘notional disappearance of Indigenous groups’ (p.5) is well taken. Bourke’s lucid discussion of ‘intensification’ theories in Australian archaeology (pp.6–7) makes a much better context for the aims of her research.

The second chapter, ‘Changing environments, seasons and resources’ is clear, detailed and professionally produced. Chapter 3, concerning ethnography and ethnohistory, is perhaps a bit thin, especially given the significance of these sources to the later interpretive part of the book. The discussion about the use of ethnographic analogy has a distinctly dated feel, and this was always really more relevant to the old world than the newer ones (p.22, also p.137). Betty Meehan’s view(1) that ethnographic/ethnohistoric information is the ‘top layer’ in Australian Indigenous archaeology makes more sense than a debate about analogical reasoning.

The fourth chapter on methodology is well written, if inevitably bearing traces of its dissertation origins with the referencing of every tiny methodological decision or option. The penultimate paragraph (p.33) is rather opaque and possibly self-serving, with its ‘would haves’ and ‘could haves’, and lacks clarity. Chapter 5 presents the results of survey and is overall clear and well written. Some small niggles: why is much of the Darwin Harbour foreshore inaccessible (p.36)—environmental reasons, private property, government property? Some tables could bear with a more compact summary presentation, such as the raw materials table (Hope Inlet, Darwin Harbour, pp.54–55). The following chapter ‘Considerations in midden analysis’ seems not to be in quite the right place, and perhaps should have been in the methodology chapter. Chapters 7 and 8 are basically the results of the excavation of selected sites and, as such, are not exactly racy but sound and well-presented.

Chapters 9, 10 and 11 are, to me, the most problematic and could have used an editorial hand. Dealing with, successively, a summary of the evidence for the past occupation of the Darwin coast, chronological change in the resource exploration in the late Holocene, and late Holocene economies in the Darwin region, it is immediately apparent that these are overlapping issues. The presentation does seem to jump around from topic to topic, and also methodologically, as some results are presented here seemingly for the first time, which makes for a thorny reading path. This is not at all to dispute Bourke’s findings, nor their interpretation, which comprises a sensitive picking over of various cultural vs environmental options, but just to suggest that the presentation could have had more clarity if it had been better organised.

Some substantive comments of more and less importance arise. Radiocarbon dates should be reported with their laboratory numbers (p.67 and elsewhere), although I note these are shown for H181. ‘Claassen … found that mollusc gathering by humans occurred mostly during the mollusc’s fast growth period’ (p.139); is rather a misleading quote— has this been found to be the case anywhere other than the specific region of the US about which she is writing?

I do have some small issues with the use of ethnographic/ historic data. I really don’t think J.G. Frazer can be cited as an ethnographic source in the same breath as A.P. Elkin– Elkin was a twentieth century anthropologist who actually worked firsthand with Indigenous people, while Frazer was a nineteenth century collector of other people’s data; so who was Frazer citing (p.139, also p.150)?

Similarly, with respect to evidence for Aboriginal people drying plant or animal foods in the ethnographic present, Mulvaney (1975) is hardly a proper source in the way Thomson (1949) and Withnell (1910) are. The first is a secondary, if not tertiary in many instances, source, devoid of references, although in the second instance he is clearly referencing Withnell. In any case, none of them mentions drying mollusc meat, nor has anyone else I know of in Australia, and I think without some evidence the idea is drawing a very long bow.

The final chapter, comprising two pages of ‘Summary, discussion and conclusions’, is admirably concise, but a more balanced presentation with shorter preceding chapters and a final chapter including more actual discussion would have provided a smoother read and a better highlighting of the not-inconsiderable achievements of the work. In sum—and hardly doing justice to the intricacies of the argument— Bourke finds that to a large extent the human history evident in the archaeology of the Darwin region over the last 2000 years reflects a successful response to a changing environment, particularly the development of coastal wetland systems in high rainfall areas of northern Australia, and the impacts of the ENSO phenomenon. She rejects the concept of a mid-Holocene ‘intensification’, including population growth, but argues the archaeological signature of the area under consideration is ‘the very visible remains of a small part of a broad-based and flexible economy characteristic of the earliest human foragers’ (p.173). With respect to the ‘highly visible mounds’, she argues that these are aggregation sites indicative of ‘ceremonial gatherings and/or exchange associated with alliance systems of social relationships extended beyond kinship to wider regional systems … which were always an integral part of forager social organisation’ (p.174). Thus she combines environmental with cultural factors in accounting for the evidence to hand, although there is a lurking materialist explanation here, of culture being primarily an adaptive force in relating to the environment. The socio-economic system she depicts is not quite the interface with the ethnographic ‘upper layer’, as she sees it changing within the last 500 years, probably under the stimulus of Macassan visits to coastal northern Australia, leading to a different resource procurement system which saw sea-going canoes enabling a reliance on saltwater turtles and dugong (p.175).

The actual presentation of the book is very nice. There are lots of good quality black and white photos in which salient details can usually be clearly descried, and figures, graphs and tables are nearly all sufficiently large and clear to be easily read and interpreted, if, as mentioned above, they sometimes seem to comprise rather too much insufficiently digested data. In Figures 7.3 and 8.3, however, it is impossible to distinguish ‘shell cap’ from ‘shell layer’. The sub-editing is excellent, with very few typographical, grammatical etc. errors. The author should, however, make up her mind whether ‘data’ is a single or plural entity (I would support the latter on etymological grounds): p.98 ‘the data suggests’ on p.98, but on p.127 ‘the data … suggest’ and again p.138, but on p.163, ‘the data supports’.

Withnell, J.G. 1910 The Customs and Traditions of the Aboriginal Natives of North Western Australia. Retrieved 8 October 2013 from <http://gutenberg.net.au/ ebooks06/0607011h.html>.

(1) Personal communication about 30 years ago, but she may have said it in print somewhere.

Bowdler, S.
Review of ’Late Holocene Indigenous Economies of the Tropical Australian Coast: An Archaeological Study of the Darwin Region’ by Patricia M. Bourke
June 2014
78
126-128
Book Reviews
Download
You must be a member to download the attachment ( Login / Sign up )