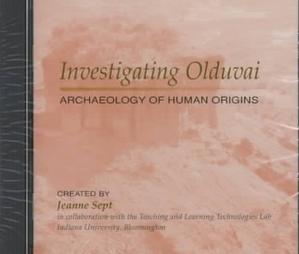 This interactive CD-ROM is designed to allow users to retrace the scientific path of Lewis and Mary Leakey and their search for fossil and archaeological evidence of human origins in East Africa. It provides data on the excavations that followed the 1959 discovery of the proto-human Zinjanthropus boseii skull in Olduvai Gorge, the geological and environmental context of the site and modern savanna setting of the Serengeti Plains. Combining video footage, images, animated graphics and exercises Investigating Olduvai is an ambitious attempt to bring the power of multimedia to archaeological teaching.

Using spatial, artefactual, fauna1 and botanical data from the FLK site, interactive tools and a field book (incorporating note taking, assignment questions, worksheets and graphing tools), the program lets the student analyse data to develop interpretations of the site and its significance for question of human evolution (e.g. was it a sedentary camp or a site of repeated visitation by hominid scavengers).

Program components are launched from an intuitive inter- face with six button-activated categories. The first of these is the ‘Database’, comprising an environmental section (animal guide, savanna vegetation, savanna herds and hunters, primates, primate diet, ancient geology, ancient environments) and an archaeological section (FLK excavation, site plot, artefacts, bone assemblage, bone data by taxon). The second is ‘Analysis’, with a theory (interpretative debates, hominid evolution) and methods section (artefact analysis, skeletal analysis, counting bones, bone damage, site formation studies). The third category is ‘Tools’ (overview, fieldbook, notepad, glossary, help, index, bibliography, further readings, and credits). Once launched the user navigates through each of these categories using mouse-activated arrows. The remaining three buttons are part of the interactive wiring of this pro- gram. ‘Bookmarks’ flag sections of interest, ‘Related Topics’ is a neat relational feature that can be hit when the user wants to list further parts of the program data relevant to a particular topic or Fieldbook question, and ‘Recent’ holds the most recently used topic pathways.

In addition to well-designed graphics, extensive video footage is used as enhancement for parts of the program, as in the artefact analysis section. Computerised enhancements (simulation of changes in the ancient environment of Olduvai or animated scavenging scenarios) further extend the multi- media scope of this program. In the introduction, and for some of the video clips and animations, the author also provides a voice-over narrative.

While the multimedia features of the program are seductive, its real power lies in the extensive ‘Tools’ Fieldbook consisting of 122 pages of Q & A. Developed as a teaching tool over several years, the program’s questions have been carefully graded from short factual answers, through longer descriptions to show mastery of terms and concepts, to short one-page responses to demonstrate an ability to integrate different types of data. Finally a number of full essay questions are included to allow the student scope for analysis and synthesis of evidence in the construction of an archaeological interpretation.

The program has been well engineered and evidently thoroughly tested. The CD is configured to run on multiple operating systems. I tried the program on three of the four platforms (Mac, NT and Win 95) and found it to be equally stable in appearance and operation on each. A small initialisation difference was that the Mac recognised the program for launch immediately whereas in the NT/Win 95 environment the folder appropriate to the system had to be navigated to first. Given the heavy use of video and graphic animation the program is surprisingly economical in the minimum RAM required, a feature that should facilitate access for people without the latest and greatest in computer hardware.

While overall Investigating Oldwai is impressive, there are a few aspects of the program that I found mildly disconcerting. The quality of much of the video footage appears to be fairly amateur, with jerky, hand-held pans and sometimes overlong clips. Of greater concern is the issue of data integrity when making the jump to digital formats. In the introduction Sept explains that the program offers an opportunity to analyse real data. However digital ‘reality’ is undermined by occasional blatant manipulations of imagery (such as the comparison between a dry and flooded watercourse). While perhaps not serious in the context of a general teaching and learning product it raises a question that will no doubt be increasingly relevant as more and more archaeological information is stored directly in digital format: how can we establish, maintain or check the authenticity of such data?

In short this program is a serious contender in the sphere of archaeological teaching and learning. Its Fieldbook component is ideally suited to a course on human origins and provides a self-paced learning environment that could be readily tailored to suit introductory or more advanced-level undergraduate courses in palaeoanthropology and archaeology. The multimedia features of Investigating Olduvai ensure that the issues raised will be accessible to a wider audience.

QuickTime for Mac and Windows supplied on disk.

Grave, P.
Review of ‘Investigating Olduvai : Archaeology of human origins’ by Jeanne Sept
June 1998
46
57–58
Book Reviews
Download
You must be a member to download the attachment ( Login / Sign up )