Review of ‘Inauthentic Archaeologies: Public Uses and Abuses of the Past’ by Troy Lovata 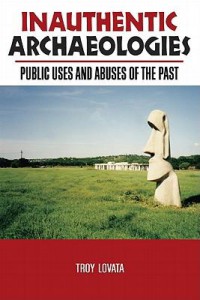 Most archaeologists have their own favourite inauthentic archaeology, whether it is Indiana Jones’s or Lara Croft’s exploits, sewer vents shaped like ancient Egyptian obelisks, Stonehenges made from Cadillacs or a secret fascination with claims for Egyptian pyramids in Queensland. Part of our assimilation into a professional culture involves becoming intuitively aware of what is ‘IN’ and what is ‘OUT’ as far as archaeology goes. Most of us are clear-cut on what constitutes legitimate archaeology and therefore we should not have much of a problem deciding what is not legitimate or authentic. In this useful book Troy Lovata challenges the idea that such a demarcation between authentic and inauthentic archaeology is straightforward and a simple matter of crossing a threshold. He further argues that the professional archaeology community needs to become more involved in understanding what happens with the many uses of archaeology that are not directly controlled by archaeologists.

The book is written for undergraduates as an introduction to the idea that archaeology also exists outside the boundary of the professional domain. Each chapter is self-contained, with a bibliography and a page of critical questions and class exercises. The case studies are broad-ranging – the Piltdown fake (which is told in cartoon form), a modern recreation of an Anasazi cliff-dwelling, torreons (cylindrical Spanish towers) in the American southwest, the work of three artists who incorporate archaeology into their work and a final chapter on fake henges and Easter Islandmoai. Each case study looks at one or more aspects of the boundary issue, and the case studies present increasingly complicated situations. The deliberate hoax of Piltdown presents an initial clear-cut demarcation between real and fake archaeology, but as the case studies proceed Lovata introduces more complex situations. The Manitou Springs site in his next case study is an Anasazi cliff dwelling of the same type as Mesa Verde, but built about a century ago, outside the prehistoric Anasazi area, but using remains from an authentic ruin transported to the site. Still clearly fake but, like excursions to Old Sydney Town and Sovereign Hill, affording an opportunity to access and interact with the past that is not possible with whatever is left of the ‘real thing’. The interpretation of the site stresses the support of pioneering archaeologists in creating an accessible and generally accurate facsimile, but also underplays the fact that it is not a real ruin. Lovata explores the consequences of this approach and how the public and professional communities respond.

The Manitou Springs case study introduces the idea that archaeology is not just what archaeologists regard as authentic. There are other audiences, including the public, Indigenous and ethnic groups who use the past in ways that are different to those of the professional heritage community. The torreon chapter brings home the idea of ethnic identification being reinforced by the use of buildings and motifs from the past. In this case torreons, cylindrical defensive towers built in Spain and then a feature of Spanish settlement in the US southwest, mark a specific ethnic affinity. Modern forms of the torreon are now included in advertising, fast food joints and public art. Are these fake or just the most recent phase of the long history of that building type? The chapter also makes the point that use of motifs of the past is not passive but also ideological and have different readings through time and to different audiences. This is reinforced in the final chapter, a fun look at the construction of fake Stonehenges and Easter Island moai in the United   States.

Inauthentic Archaeology covers two related but distinct issues – appropriation and use of the past and appropriation of archaeology. Appropriating the past is nothing new – it is one of the ways that power is legitimised or authority undermined. With Piltdown, Manitou Springs and torreons Lovata examined how images of the past were used in modern contexts. In his next chapter, focusing on three artists, he looks at how these artists use archaeological methodology. Artist Mark Dion, for example, stages art performances that have involved the creation of archaeology-style digs where ‘sites’ such as the banks of the Thames are gridded-out, collected, the artefacts analysed and classified and ultimately displayed. In effect, he is parodying the sort of archaeology that we do, and subverting it by showing that it is possible to go through the motions of survey, recovery and classification without being an archaeologist at all. This has sometimes provoked a surprising degree of criticism from archaeologists, based on Dion’s own comments in his interview with Lovata and online discussion group comments. While some of this is possibly philistinism, at least some of it must be from the discomfiture of archaeologists being shown up as ‘performing’ a role.

In the study notes Lovata asks ‘Is archaeology a set of artifacts? Is it a series of stories about the past? Or is it a certain way of acting, dressing, and looking at the world?’ (p.134). This question comes to the core of Lovata’s argument. While most archaeology is unarguably authentic, there is a grey area that brings us into the realm of different uses for the past (e.g. torreons and carhenges), and in using archaeology as a means of reaffirming an object’s authenticity or worth (e.g. Manitou Springs or Mark Dion’s work). The case studies bring out the issues involved in these situations, and the commentary and study notes set them into a broader context, and provide guidance for discussion or further enquiry.

Why is any of this important? Lovata’s argument is that as the creators of the knowledge of the past we have a responsibility to at least know to what uses that information is put by others. He also argues strongly that archaeologists have public stewardship roles in not only discovering stuff, but also telling the stories of the past as an ethical obligation. To do this successfully sometimes means using other tools – hence the Piltdown cartoon, understanding how artists tell archaeological stories, the use of fake ruins to make the past come alive and so on. Underpinning all of these is a concern that unless archaeologists understand what is going on and take some ownership of the process by which their data is used, then they will lose the ability to create enduring benefits for public knowledge and heritage conservation. Archaeologists have lost their position as the main voice of authority about the past, if they ever had it, and now contend with many other groups to be heard.

I think the book certainly succeeds as a primer on the subject, although the exclusive focus on the US, apart from Piltdown, may serve to reinforce a prejudice that it is something that only foreigners do. That would be disappointing, as the lessons are directly applicable to an Australian context. Australian archaeologists have had decades of trying to negotiate and maintain a professional culture that is constantly being challenged by Indigenous people, and has learned the hard way that it cannot maintain the sole authoritative voice about the past. Inauthentic archaeologies abound here as much as anywhere, from claims for secret visitors to Australia (the Gympie pyramid, Stradbroke Island shipwreck, the Mahogany Ship), use of historical imagery for ideological purposes (Eureka flags waved by everyone from neo-Nazis to the far Left), pretend heritage from the educational to the surreal (Kryal Castle) and a continuing debate about whether there is such a thing as a single national history and a question of what place material evidence has in it.

The book is a good introduction to identifying and defining inauthentic archaeology. As an introductory text, Lovata portions his argument and evidence out in small self-contained chunks that reinforce one point at a time. I would recommend it to anyone interested in the broader role of archaeology and the use of archaeological information in society. While it is a primer, it provides one of the few book-length treatments of the subject and raises questions that are relevant to current professional archaeological practice in Australia. What is valuable about this book is that it does not shy away from engaging with inauthentic archaeologies. They do not have to be our secret pleasures or shames.

Denis Gojak
Review of ‘Inauthentic Archaeologies: Public Uses and Abuses of the Past’ by Troy Lovata
June 2008
66
72-74
Book Reviews
You must be a member to download the attachment ( Login / Sign up )