Review of ‘Hunters and Collectors: The antiquarian imagination in Australia’ by Tom Griffiths 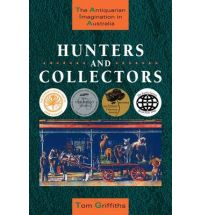 Post-structural analysis has rapidly become the dominant genre in Australian studies. Amongst the flood of books Hunters and Collectors by Tom Griffiths stands out for the clarity of its writing and analysis. The book has already attracted a wide scholarly and general audience and is set to become a classic of this genre. Part of its appeal lies in the variety of ways in which it can be read. On one level the book is about the interplay of national identity, historical consciousness and environmental sensibilities. On another it is a fine-grained social history of amateur history-making in Victoria. On yet another level it can be read as a study of the process of colonisation and emotional, symbolic and intellectual appropriation of land and place.

The focus of the book is on Victoria from the mid-nineteenth century to the present. Part 1 (Collection) examines the social history of antiquarianism and amateur archaeology, and presents a detailed character study  of R.E. Johns: colonial collector, grave robber, amateur ethnologist and Victorian diarist, Part 2 (Possession) looks at changing environmental sensibilities, Victorian natural history societies, and the self-conscious creation of links to land and place in colonial society. Part 3 (Preservation) deals with the post-war heritage movement, ideas about urban heritage, wilderness and Aboriginality.

The book opens with a programmatic statement by Greg Dening that historians should be ethnographers of their own society and that ‘Of all the systems that are expressions of who a people are, the sharpest and clearest is their historical consciousness’. Griffiths then proceeds to chart changes in Australian identity by following changes in popular perceptions of nature, Australian history and Aboriginality. With a nod to Tolstoy he describes dinner table conversations as ‘the atomic structure of the fabric of national identity’. It is not the Academy that is Griffith’s main interest in this book. For him history-making occurs ‘at the dinner table, over the back fence, in parliament, in the streets, and not just in the tutorial room, or at the scholar’s desk’. This is where Griffiths pursues his ‘history of people making history’. And it is here that he develops his interest in the two historical themes which run through the book as a sort of meta-narrative: attachment to land and place, and guilt of dispossession, or as he puts it, ‘the knowledge that the land had been – perhaps still was- someone else’s’.

Along the way Griffiths presents a compelling account of the cognitive aspects of this process of colonisation and of how Europeans sought to take hold of the land emotionally and spiritually. For Griffiths, this process begins with an intellectual appropriation of Aboriginal places and cultural remains by amateur ethnographers and by stone tool collectors. It involves a self conscious creation of a new cultural landscape imbued with meaning, historical associations and appropriate monuments (‘Foundation’ trees, monuments to ‘the last of the tribe’, or ‘Old Pioneers’ memorials). The Victorian Historical Memorials Commit- tee was explicit about the process. They aimed ‘to create an instructive landscape, one that would offer places of association’. The subsequent development of field naturalist societies represents popular interest in assimilating more detailed knowledge of the land and local ecology. Con- temporary issues such as the rise of the heritage movement, debates about ‘wilderness’, and the changing role of museums begin to look as if they are part of the process of the working out of colonial relationships in Australian life.

It is clear, however, that for Griffiths the ‘antiquarian imagination’ is not something restricted to white Australians. He also turns his deconstructive gaze upon recent ‘Black Histories’, explaining that in the same period that other Australians have turned to histories of place, Aboriginal family and local history has proliferated. As Griffiths put it: ‘Just as settlers invent traditions in a land they have only recently inhabited so do Aborigines sustain, rediscover and create associations of place.’ One of the interesting aspects of this personal search for identity is the changing role of museums, from ‘antiquarian archive to cultural battleground’. Paradoxically, museums have become an important link in the chain of continuity of indigenous culture in south-eastern Australia. This is nicely illustrated by the case of Connie Hart, who used an eel net collected by R.E. Johns at Lake Condah in 1902 as a model for one she made in the 1980s. Griffiths asks: ‘Did we expect – or even dare to hope – that museums might operate in this way?’.

For archaeologists Hunters and Collectors invites comparison with A Social History of British Archaeology (Hudson l981), or The Amateur and the Professional: Antiquarians, Historians and Archaeologists in Victorian England 1838-1886 (Levine 1986), but Griffith’s book is not primarily a social history of Australian archaeology. The main focus of the book is popular antiquarianism rather than professional archaeology. Archaeology disappears from the pages of this book after about 1970, as professionalisation and legislation restrict it to the Academy. It briefly reappears – in the form of the Mungo hand-back in 1992 – when Griffiths discusses the way in which Aboriginal people reconstruct their own histories. Hunters and Collectors does however provide a fascinating look at some of the early tensions between professional archaeologists, such as N.B. Tindale and John Mulvaney on the one hand, and on the other the Victorian ‘Stone Circle’ – the stone artefact collectors centred around S.R. Mitchell and A.S. Kenyon. Those interested in the social history of the field will find many familiar characters in this book – Tindale, E. Gill, T.D. Campbell, S.A. Mitchell, D.A. Casey, and A.S. Kenyon, to name a few. Hunters and Collectors will be a very useful companion volume to David Horton’s Recovering the Tracks (1991) and Prehistory to Politics (Bonyhady and Griffiths 1996).

For people interested in how contemporary Australians imagine themselves this is an important book. Hunters and Collectors deserves to be discussed and argued about at the dinner table and over the back fence and wherever else history is explored and enjoyed.

Smith, M.
Review of ‘Hunters and Collectors: The antiquarian imagination in Australia’ by Tom Griffiths
December 1997
45
69–70
Book Reviews
Download
You must be a member to download the attachment ( Login / Sign up )