Review of ‘Hunter-Gatherers in History, Archaeology and Anthropology’ 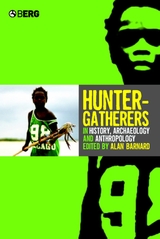 This volume is based on papers presented in the ‘Hunting and Gathering as a Theme in the History of Anthropology’ session at the Ninth International Conference on Hunting and Gathering Societies held at Edinburgh in September 2003. The editor Alan Barnard is well placed to assemble this collection following the success of his earlier book History and Theory in Anthropology (Cambridge University Press 2000). On the back cover, Tim Ingold writes ‘Alan Barnard has assembled some outstanding contributions, providing a benchmark assessment of the past achievements and future prospects of hunter-gatherer research’. The key word here is ‘some’, for as with most edited volumes, we are presented with an eclectic group of papers that vary in quality. Yet the thematic diversity of the papers mirrors nicely the multiplicity of directions hunter-gatherer studies have taken over the last 20 years. Whereas the landmark 1966 Man the Hunter conference at the University of Chicago attempted to bring about an Anglophone channeling of hunter-gatherer studies, the ensuing rise of 4th world peoples’ activism, globalization, postmodernism and post-colonialism have seen this authority challenged and fragment. Barnard has done well to capture some of the diversity and challenges confronting modern huntergatherer studies.

Barnard divided the 17 chapters into three parts: (1) Early visions of hunter-gatherer society and their influence, (2) Local traditions in hunter-gatherer research, and (3) Reinterpretations in archaeology, anthropology and the history of the disciplines. Part 1 presents four papers exploring the origins of the concept of ‘hunter-gatherers’ amongst various scholarly traditions. Pluciennik and Barnard provide comparative historical overviews of European and Asian approaches to classifying and ranking societies. While both papers are excellent, the opportunity was missed to explore in depth the colonial fabric of such constructions. The hypothetical concept of hunter-gatherers was developed within the broader theoretical framework of social evolutionism as a philosophy of colonialism. Hunter-gatherers were invented as a category of humanity to position many of the world’s Indigenous peoples as an anachronistic form of ‘primordial man’ (‘savages’) who beseeched conquest and extermination. It is no coincidence that the two key periods of Western scholarship on development of the hypothetical concept of hunter-gatherers – Ancient Greece and Rome, and 18th and 19th century western Europe, correspond to the two key periods of European intercontinental colonialism (for an extended discussion of this issue, see McNiven and Russell Appropriated Pasts: Indigenous Peoples and the Colonial Culture of Archaeology, AltaMira Press forthcoming). All hunter-gatherer specialists are aware of the basics of this complex and often sordid history. Perhaps this is why hunter-gatherer studies continue to be re-invented in an ever-ending attempt to shed the ghosts of social evolutionism. But for hunter-gatherer studies, social evolutionism it not so much a ghost but a shadow whose form can be changed but never eradicated.

Part 2 features six papers that discuss German, Russian, Japanese and Indian anthropological traditions of huntergatherer studies. Peter Schweitzer in his paper on Germanlanguage debates of the late 19th and early 20th centuries speaks for the entire group when he states that the aim of his paper is to ‘counter… English-language bias when discussing the history of hunter-gatherer studies’. Schweitzer brings to our attention Ernst Grosse who in the 1890s not only wrote major critiques of Herbert Spencer and Lewis Henry Morgan, but also distinguished ‘lower hunters’ from ‘higher hunters’ in a schema that ‘reappeared’ in the late 20th century with immediate/delayed return and simple/complex hunter-gatherers. Artemova and Sirina in their respective papers bring out the role of state politics and ideology in Russian/Soviet traditions of hunter-gatherer studies. Their papers bring home the need for similar reflexive appraisals of the political and ideological backdrops to the development of the hunter-gatherer concept by Enlightenment scholars of western Europe (including Great Britain). Papers by Ichikawa and Sugawara provide informative overviews of Japanese scholarship in central Africa (‘pygmies’) and southern Africa (San peoples). Pappu’s paper provides a detailed and at times critical overview of the use of ethnographic analogy in Indian hunter-gatherer archaeology.

Part 3 presents the most challenging and engaging papers in the volume. Lane and Schadla-Hall discuss the intriguing question of why during four decades of reexamination and reinterpretation of the famous Mesolithic site of Star Carr that the research questions have not moved on from issues of subsistence and settlement to embrace new approaches to hunter-gatherers provided by anthropologists. No book on hunter-gatherers can neglect optimal foraging theory and Sheehan broadens the discussion to consider issues of analogy and the empirical limitations of applying OFT to the past. Suzman and Widlok discuss issues of historicity and analogy respectively with regards to Kalahari peoples. Suzman’s essentialist argument for the ahistorical nature of some Kalahari peoples is somewhat naïve as it fails to engage with literature on the mnemonic role of landscape and places in the emic construction of Indigenous histories.

For me, papers by Yengoyan, Myers, and Pinkoski and Asch on the theoretical and legal legacies of Julian Steward’s research on the Great Basin Shoshone and Paiute are the highlights of the volume. Steward’s paradigm of cultural ecology transformed hunter-gatherer studies and was foundational to the New Archaeology of the 1960s and 70s. But as Myers notes, Steward’s ‘culture core’ concept dismissed religion, ritual and social structure as epiphenomenal and marginal to understanding the so-called core issue of subsistence and environmental adaptation. Such a view alienated Native Americans and, as Yengoyan states bluntly, ‘created a new discourse in which evolutionary and economic models have reduced human actors to disemboweled humans who no longer have cultural anchors’. Pinkoski and Asch document the insidious impact of Steward’s approach as the US Department of Justice used his theoretical approach to undermine Northern Paiute land claims in the 1940s. This case study is mandatory reading for all those interested in the link between anthropological constructs and native title. But these three papers are not the only reason I recommend this book to all those interested in hunter-gatherer studies. The volume contains a stimulating mix of papers that not only de-centre Anglophone academic traditions but also challenge us to think more broadly in our formulations of those peoples past, present and future who we categorise as hunter-gatherers.