Review of ‘Historical Archaeology: Why the Past Matters’ by Barbara J. Little 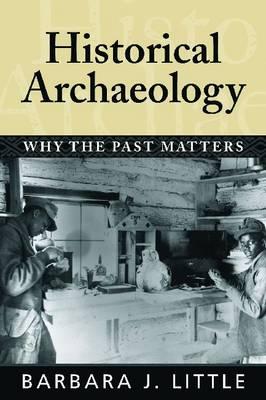 Historical Archaeology is a well-written, but ultimately frustrating book that is designed as an introductory student text to historical archaeology. The book is divided into four main sections, each subdivided into specific illustrative chapters. The first, titled ‘What Are Our Ambitions’, is an introduction to the goals of the discipline. The second section, ‘What Do We Care About’ is a guide to interpretive themes and is where we first encounter in depth Little’s passionate advocacy for historical archaeology as a means to empower the historically and politically dispossessed. The third, and probably the weakest, section is a necessarily selective, and ostensibly global, ‘Windshield Survey’ of historical archaeology. The final section consists of a discussion of public archaeology and the public presentation of archaeological interpretation. Throughout the book, emphasis is placed on the use of case studies to illustrate the main points discussed in each chapter and section. This is the merest skeletal outline of the book, but Little’s consistency of theme and tone almost requires that the rest of this review consider the book as the sum of its parts rather than as individual sections.

The undoubted strength of Historical Archaeology is Little’s clear, concise, and chatty writing style, with its frequent use of the first person pronoun. Many first- and second-year undergraduates will find Little’s engaging approach infinitely preferable to the starchier style of more traditional textbooks.

More problematic, however, is Little’s narrow thematic focus on the archaeology of domination, resistance and oppression on the one hand and her American-centrism on the other. Only a broader discussion of how these two issues dominate the book can begin to reveal how the themes are somehow simultaneously a strength and a weakness.

The problem here is not necessarily with the individual themes and individual examples that Little discusses. Domination and resistance are important themes in historical archaeology – the book’s ability to give voice to ‘muted groups’ is an important part of our discipline. Using some of Little’s own examples, recasting the Jamestown story from the perspective of the Indigenous peoples who were in contact with the settlers will be a fresh and interesting perspective to many new students. The British enclosure movement did often involve the dispossession of the rural poor. Surely no-one would seriously argue that themes of oppression, domination and resistance can be avoided in the study of African American life or Australia’s convict past. Public interpretation of archaeology has a very real role to play in bringing these areas to public attention. These are all valid and important points of discussion, and Little writes with real conviction and considerable passion when exploring these themes.

The problem instead comes in Little’s implicit insistence, notwithstanding a couple of early chapter disclaimers, that these are the only themes that historical archaeology should focus on. Furthermore, only the excellent ‘Windshield Survey’ chapter on the Florida Mission of San Luis Talimali, which discusses voluntary conversion and the ‘underappreciated’ broader cultural impact of Catholic missions to Native Americans, offers any real attempt at nuance within these themes. After several chapters of this narrow focus on repression, domination and capitalism, many a reader will be left with the awkward feeling that Little believes that historical archaeology’s sole goal lies in uncovering the world of Monty Python’s constitutional peasant – ‘come see the violence inherent in the system! Help! Help! I’m being repressed!’

The other area that may give many international readers of Historical Archaeology pause is Little’s clear American-centrism. As early as page 10 in the introduction, Little states that most of her examples come from the United States. This is, again, not necessarily a weakness in itself if the book is, as seems the author’s intent, primarily intended for an American audience. In submitting the volume for review in Australian Archaeology, however, the publishers clearly hope the book will find an international audience. This is more problematic.

Australia generally fares much better than Britain and Europe (continental Europe is essentially invisible), and mentions of Australia are scattered throughout the book. Yet the Australian reader may well be left wondering why Little places so much emphasis on the Irish in Australia. The chapter on Australian convicts closes with an explicit link drawn between Australian convicts and the imprisonment of the Irish. Later, the chapter on urban slums features passing mentions of Little Lonsdale and Cumberland/Gloucester, but the former apparently only so that Little can mention that Little Lonsdale Street was ‘full of Irish immigrants’ (p.123), an emphasis that will surely strike those familiar with the site as at best incomplete. In the convict chapter in particular, Little’s stress on the ‘shared heritage of British exile’ (p.106) between Australia and Ireland leaves it unclear as to whether the implication is that all imprisoned Irish were convicts, all convicts were Irish, whether an individual could only be either a convict or Irish, or indeed how being imprisoned within Ireland was comparable as an ‘exile’ to being transported to Australia. If Little is familiar with the complexities of the interaction between Irishness and convictism, which she surely must be, then she has failed to state these coherently.

Historical Archaeology’s problems with international research are perhaps best exemplified by the chapter on the ‘Enclosure of the English Countryside’. After a cursory discussion of the history of enclosure, in which no mention is made of enclosure as a British, rather than English, phenomenon (‘England’ and ‘Britain’ are frequently and incorrectly used synonymously throughout the book), the reader finds out that the archaeological case study has little to do with enclosure. Instead, all but one of the academic citations in the chapter involve an exploration of American work on the role of the common household fork in the shift from medieval to modern ideologies. The author’s intent seems to be to connect this with enclosure, and the attempt could probably be made, but it nonetheless seems unfortunate that, after some 40 years of post-medieval archaeology in the United Kingdom, the primary cited work in a chapter on English enclosure consists of tangentially-related American research.

All of that said, despite the narrow focus on themes of domination, oppression, and resistance, the problematic engagement with international research, this book will still serve as an excellent introductory text for North Americans looking for a theoretically-Marxist introduction to historical archaeology. However, those of us working in the rest of the world will almost certainly prefer to look elsewhere.

Alisdar Brooks
Review of ‘Historical Archaeology: Why the Past Matters’ by Barbara J. Little
December 2007
65
55-56
Book Reviews
You must be a member to download the attachment ( Login / Sign up )