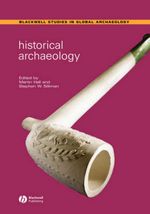 There are two common criticisms of historical archaeology from practitioners of other forms of archaeology, namely that it is not all that necessary as there are documentary records for the time periods studied and that there is a general lack of theory within the subdiscipline. Well, Hall and Silliman put the lie to both these assertions. Within their volume there is presented a range of theoretical perspectives and thematic issues tackled by the practitioners of various post-modern historical archaeologies, and the concentration in the case studies (in Part 3) on the interpretation of material culture demonstrates in case after case the diversity of the new interpretations and reinterpretations that are possible once the written texts are not awarded evidential primacy.

The scope of the book is impressive. It deals with a global historical archaeology examining the impacts of the movement of Europeans into the rest of the world from the fifteenth century onwards. It goes from specifically dealing with a single artefact to the dislocation of entire peoples. Historical Archaeology contains 16 chapters divided into an introduction and three parts. Part 1 deals with doing historical archaeology in the real world and the relationships between different disciplines and the political positions of historical archaeologists. Part 2 examines a number of themes that are important areas of study in historical archaeology such as engendering (Voss), ideology (Burke) and institutions (De Cunzo). The one deficiency in the book is the lack of a chapter committed to agency. Although in the introduction the editors claim that most papers deal with the concept of agency, it would have been helpful to have a paper dedicated to considering agency in much the same way that they deal with class, gender and the other major themes of historical archaeology. Part 3 contains six case studies demonstrating the relationship between local sites and globalisation of the modern world.

There are some standout papers in this book and one of the best is Heather Burke’s chapter on ideology. In a mere 14 pages she is able to present in a clear, coherent and easily readable form the complexities related to the multiple ways of defining the term ‘ideology’ and the history of historical archaeological approaches to studying the concept by drawing on classical examples. Burke’s chapter is an exemplar for the entire book. It makes complex ideas easy to understand.

The editors do not take as their starting point a single definition of historical archaeology but rather realise that historical archaeology has numerous cultural manifestations the world over and therefore they draw their contributors from the US, Australia, England, South Africa and Brazil. This gives the book an international appeal and this is particularly so in Part 3 where four of the six case studies related to non-North American places. Interestingly, though, all four chapters in Part 1 relate to the dimensions of historical archaeological practice are all penned by North Americans – some diversity here would not have gone amiss.

Remember how you felt back in 1999 when you first read Matthew Johnson’s Archaeological Theory (Blackwell)? You will get the same sensation of ‘so that’s what it’s all about!’ from Historical Archaeology. And fittingly, therefore, it is Johnson who has the last word in this recent book, when he brings the historical archaeological models developed for the interpretation of the societies of the New World back home to Europe.

Jon Prangnell
Review of ‘Historical Archaeology’ edited by Martin Hall and Stephen W. Sillman
December 2007
65
62
Book Reviews
You must be a member to download the attachment ( Login / Sign up )