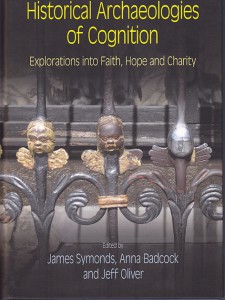 The chapters in this edited volume provide a broad discussion of the relationship between material culture and intangible aspects of humanity. Building on James Deetz’s and Henry Glassie’s structuralist work, the book aims to explore how the intangible concepts of hope, faith and charity can be examined in historical archaeology. Stemming from a 2007 Contemporary and Historical Archaeology in Theory conference, the chapters in the book employ a wide range of approaches to examine various intangible aspects of humanity in Europe, North America and Australia.

Although the authors have stepped beyond the school of thought that sees material culture as a reflection of thoughts and beliefs, this volume highlights some of the challenges faced by archaeologists attempting to study past cognitive processes. Cognition is not a straight-forward term, and is only mentioned twice throughout the volume, both times in the first chapter. In the introductory chapter, Symonds and Oliver appear to use cognition to mean thought processes, and equate this with the identification of faith, hope and charity in archaeological material. My interest lies in the theoretical aspects of this topic, so I would have been interested in seeing this premise investigated further in the subsequent chapters.

Not all of the chapters mention faith, hope or charity, so the reader is sometimes left to make inferences about their connection to historical archaeologies of cognition. A number of the chapters deal with material culture of a religious nature—religious artefacts, religious buildings or artefacts related to people of a particular faith. Others examine the material expression of hope—the hope of people in internment camps, and the hope for peace symbolised by a former prison hospital in Northern Ireland. Charity is the least thoroughly examined concept in the trilogy, and is mentioned only occasionally throughout the book. All chapters deal with some sort of intangible aspect of archaeology, but not necessarily cognition.

I found Chapter 2, ‘Catholic artefacts in a Protestant landscape: A multi vocal approach to the religiosity of Jamestown’s colonists’ to be the most innovative and interesting chapter from a theoretical point of view. Travis Parno and Brent Fortenberry challenge the urge to find ‘the answer’ and present a polished story, and instead present an approach that embraces the complexities and multiplicities of the past. They present four different plausible interpretations to explain the presence of some Catholic artefacts at a Protestant settlement in Chesapeake. While their discussion provides valuable insights into the religious environment at the settlement, for me the strength of the chapter lies in its structure. Not only do they examine the possible cognitive processes of the colonists—they also expose their own thought processes. By presenting multiple interpretations, and exposing their interpretive process, they create a powerful argument for a different way of communicating archaeological research. Instead of trying to prove an unprovable story, their work embraces the difficulties faced by archaeologists attempting to study the intangible, and in doing so I believe they create a more comprehensive picture of the past.

Several chapters deal with the faith of the people whose artefacts are being analysed. In ‘Articles of faith and decency: The Huguenot refugees’, Greig Parker examines the relationship between material culture and social identity. Instead of treating material culture as a reflection of identity, Parker argues that material culture played an active role in transforming Huguenot identity. The production of luxury goods by Huguenot refugees outside of France reduced the cohesiveness of this religious group and resulted in a greater level of integration in their new host societies. Also addressing faith is the only Australian contribution to the volume, ‘Assuming the aspect of a civilised place: Methodists in paradise’, in which Jon Prangnell and Kate Quirk discuss what the material culture from Methodist households in the Queensland goldfields town of Paradise can reveal about the religious beliefs of the inhabitants. They argue the artefacts recovered from the middle class Methodist homes and the Methodist mission are indicative of Methodist attitudes of respectability, gentility and cleanliness in the midst of an isolated mining community. Although religion has not been studied extensively in Australian historical archaeology, this paper suggests it is an area in which we can hold our own on an international level. This chapter has well-developed links to the premise of the book—Prangnell and Quirk discuss the relationship between the tangible and intangible through the examination of the material expression of Methodist beliefs.

Two chapters address landscapes of faith. Timo Ylimaunu discusses social control and early modern church architecture in Northern Finland. Ylimaunu sees urban design and church architecture as tools used to control the people of Tornio, by both Finnish and Russian authorities. David Gadsby’s chapter about heritage in twenty-first century Baltimore deals with the faith and hope of archaeologists. He argues archaeology has the power to change current public discourses and empower communities. These chapters demonstrate the usefulness of landscapes in investigations of social relations in the past and present.

fashions in Portsmouth is evidence of a desire to maintain a connection to ‘English visual identity’. Comparisons of material culture between England and colonial sites are certainly important, and relevant to Australian historical archaeology; however, this chapter highlights some of the many challenges historical archaeologists face when attempting to compare assemblages, such as reconciling differences in site formation processes, excavation techniques and artefact catalogues. While White acknowledges these challenges, they were not convincingly resolved. A discussion of the complex relationship between material culture and identity, and the different choices available to consumers in Portsmouth and London would have strengthened her argument further.

The several chapters dealing with very recent history were interesting. The events in these chapters are within living memory, and the use of archaeology to study intangible aspects of these events is fascinating. Laura McAtackney’s chapter ‘Manifestations of hope in a place of fear: Long Kesh/Maze prison, Northern Ireland’, examines hope in a former prison hospital in Northern Ireland. She discusses the significance of Long Kesh/Maze prison in recent Northern Irish history, and argues its association with conflict and death has been transformed into a site of remembrance and of hope for peace. Two chapters examine World War II internment camps. Gilly Carr discusses the resistance of Channel Islanders in German internment camps—acts of hope and faith. She sees the V-sign campaign, expressed by decorating objects or inscribing their bodies with Vs, as morale-boosting silent acts of the resistance of the prisoners against their guards. Jeffery Burton’s chapter deals with camps for Japanese Americans. Not only has the archaeological investigation highlighted the harsh conditions in the camps, but Burton argues it is also indicative of the faith, hope and charity of the Japanese Americans incarcerated at the camps. He identifies artefacts and landscape features that show the inmates’ faith in America, in spite of their incarceration, and sees the expression of charity in the improvements made to the internment camp grounds, to improve the experience for the whole community.

In Chapter 8, ‘Reflections on resistance: Agency, identity and being Indigenous in colonial British Colombia’, Jeff Oliver explores the desires of Indigenous people in colonial Pacific Northwest America. Oliver argues that identifying Indigenous agency in acts of resistance against colonial forces perpetuates a narrative of Indigenous subjugation. He uses material culture to discuss agency and the transformation of Indigenous identities in a colonial landscape. His analysis of the relations on colonial frontiers would be of relevance to anyone studying contact era relations in Australia.

The two final chapters deal with remembrance. In Chapter 12 Harold Mytum discusses religious faith through the examination of gravestones in New England, Britain and Ireland. In Chapter 13 Samuel Walls examines differing approaches towards commemoration through a study of First World War memorials. These chapters highlight the value of monuments in studying the beliefs of communities.

Although the volume is interesting, there is little linking these chapters together or holding the book together as a whole. The chapters explore some sort of intangible idea using material culture, most with some link to faith, hope or charity. Although the authors do not see material culture as a straightforward reflection of beliefs, only a few of them acknowledge their role in the creation of archaeological knowledge. Given the book is dealing with intangible concepts—the thoughts of people—the role of archaeologists as interpreters could have been paid more attention.

In the introductory chapter, Symonds and Oliver argue ‘seemingly intangible aspects of the past are knowable’ (p.1). This argument underpins the book, but I believe Parno and Fortenberry’s chapter on Jamestown is the only chapter that clearly scrutinises the process of ‘knowing’ these intangible aspects. The book lacks cohesiveness, and I think this primarily lies in the limited examination of the concept of cognition, and its relationship with material culture. Nonetheless, the relationship between tangible and intangible is a fascinating subject, and this book makes a valuable contribution to historical archaeology. It is certainly worth reading by anyone attempting to examine what people in the past were thinking.

Kay, E.
Review of ‘Historical Archaeologies of Cognition: Explorations into Faith, Hope and Charity’ edited by James Symonds, Anna Badcock and Jeff Oliver
June 2015
80
S145-S146
Book Reviews
Download
You must be a member to download the attachment ( Login / Sign up )