Review of ‘Frauds, Myths and Mysteries: Science and pseudoscience in archaeology’ by Kenneth L. Fedden. 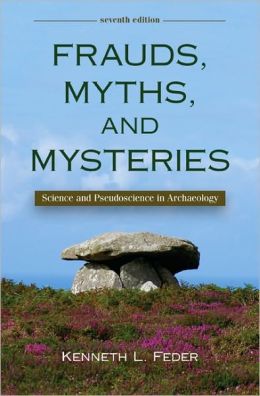 In this second edition of his popular 1990 book, Feder maintains the same chapter outline, but updates the previous content and expands the subject matter to reflect recent developments in the fringes or ‘Outer Limits’ of prehistoric archaeology. New topics include tabloid publications, de- constructionist challenges to science, the archaeology of Mars, New Age employment of Native American beliefs, mitochondrial DNA and human migration, Chauvet Cave and the meaning of rock art, and the Tyrolean Ice Man. In addition, the number of illustrations has been increased by approximately 25%. This very readable and entertaining volume provides a critical assessment of both frauds and genuine archaeological mysteries.

The book’s main theme is the application of the scientific method to controversial questions about past human behaviour. By focusing on the history of misuse and misinterpretation of data in relation to the prehistoric past, Feder emphasises the utility of science in debunking the myths and dogma promulgated by contemporary charlatans and ‘space cadets’. More importantly, Feder demonstrates how the scientific method can be employed to establish ac- curate knowledge about the past. A critical examination of alternative hypotheses provides a sound approach to meaningful and reliable constructions of the past.

Chapter 1 provides an overview of science and pseudo- science in archaeology. A new survey of university under- graduate students lends additional support for the long- term maintenance and resilience of popular myths and romantic notions of the past in American society. Feder argues that there are a number of reasons that public ignorance and misinformation continue to plague archaeology. Due to the popularity of archaeology among the general public, the discipline is extremely susceptible to fanatics motivated by economic gain, fame, notoriety, nationalism, religion, romanticism, or mental instability. Thus, a well- informed public is the best defence against these fanatics.

After addressing epistemology in general, Chapter 2 introduces the scientific method as a window to the past. This chapter provides a brief overview of scientific and non-scientific approaches to knowledge with a specific reference to archaeological problems. The remaining chapters of the book provide examples of the application of the scientific method to a wide range of frauds, myths and mysteries concerning the human past.

Chapters 3-7 address popular frauds in prehistoric archaeology, including the Cardiff Giant in upstate New York, the Piltdown Hoax, various purported Pre-Columbian discoveries of the Americas and the North American Moundbuilder Myth. Although the Cardiff Giant provides an example of an easily detectable fake, the quality of counterfeits has been improved significantly by recent technological developments. Advanced technology, however, has also im- proved our ability to detect these frauds.

A number of unsubstantiated claims about the prehistoric archaeological record are discussed in Chapters 8- 11. These include the Lost Continent of Atlantis, Ancient Astronauts. Psychic Archaeology. Noah’s Ark and the Shroud of Turin. Unfortunately, this revised edition was released prior to the culmination of the recent Australian legal developments in relation to the ongoing Noah’s Ark saga. Such developments demonstrate the dynamic nature of science and ensure that a third edition of Feder’s book will be required within a short period of time.

In Chapter 12, the book concludes with the examination of some genuine archaeological mysteries and research opportunities. These include ongoing research involving the Ice Man of the Tyrolean Alps, European Upper Paleolithic cave paintings, Stonehenge and the Mayan civilisation of Mesoamerica. This final chapter demonstrates the utility of the scientific method in addressing alternative hypotheses regarding a range of dynamic archaeological research areas.

With the absence of historical documents and living informants, the task of reconstructing past lifeways is especially difficult for prehistoric archaeologists. Feder provides a refreshing scientific approach to the study of the prehistoric past that contrasts sharply with the pessimism, uncertainty and futility prevalent in the extreme varieties of contemporary post-processual archaeology. In an era when science is under attack by a range of camps including groups as diverse as ‘scientific’ Creationists and radical post-processual archaeologists, it is comforting to see that some archaeologists remain vehement about carrying the scientific banner.

In conclusion, I recommend this book to both professional archaeologists and the general public. It does a fabulous job of educating the public regarding a systematic scientific approach to archaeological problems, and offers alternative explanations for a range of popular frauds and myths relating to the human past. In addition, the methods outlined by Feder can be applied to other mysteries and processes encountered in people’s everyday lives. For the professional archaeologist, the book provides an excellent resource for undergraduate teaching. In fact, students in geology, palaeontology and other natural sciences will also benefit from the methods and case studies offered in this stimulating volume.

Pate, D.F.
Review of ‘Frauds, Myths and Mysteries: Science and pseudoscience in archaeology’ by Kenneth L. Fedden.
December 1997
45
68–69
Book Reviews
Download
You must be a member to download the attachment ( Login / Sign up )