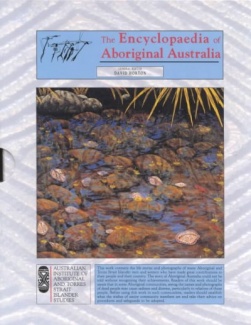 To this end Horton has compiled a comprehensive guide to all things associated with Aboriginal Australia. The Encyclopaedia contains more than 2000 entries by more than 200 authors, and spans two volumes. Most entries are followed by suggested further reading, intended as a springboard for those interested in a more detailed investigation of the topic. This list contains one or two of the classic works relating to the topic. Each work cited is given a full reference in the Bibliography. Appendices are extensive, and contain lists and statistics relating to art, imprisonment, language, national awards and religious missions, among others.

Also provided at the beginning of each entry is a list of related topics to be found in the Encyclopaedia. These lists enable readers to build up an overview of a particular topic. One drawback to this format is that different purposes inform each author’s entry, and therefore one may not find precisely the follow-up information desired. For example, in searching the related topics for ‘Intensification’ I found that the ‘Social Organisation’ entry presents a static anthropological model of Aboriginal social organisation, as it was immediately prior to and following European contact, with no suggestion that archaeological debate rages about the possibility of pre-European social change.

One further criticism stems from the practice of naming the main author, without providing biographical details. Because of this, we are reliant on the author self-describing to work out the context within which they work. For controversial topics, such as human burials, this can be a critical issue. For example, in her entry on ‘Human Remains’ (p.485) L. Richardson identifies herself as an Aboriginal. She then makes a passionate and heartfelt case for the ‘unconditional’ return of all Aboriginal skeletal remains. While acknowledging the usefulness of palaeopathology to Aboriginal peoples’ political aspirations, she nevertheless holds up Murray Black’s amateur plundering of Aboriginal burials in the late 19th century as the only model for academic interest in Aboriginal skeletal remains. In this vein, the only other discussion I could find on the issue of returning human remains to Aboriginal communities is in an article by Peter White, who doesn’t self identify as a white archaeologist, under the heading ‘Prehistory’ (p.895). White gives an academic, and opposing, view on the issue. It is no surprise that his entry was not one listed in the ‘See Also’ section of Richardson’s article, which did however include the related topics of Lake Mungo and Kow Swamp. Knowing the context of the writer helps us to be critical of their statements.

Despite these criticisms, David Horton is to be congratulated for undertaking such an enormous task. It is an invaluable resource. I have used it extensively in teaching Aboriginal Studies in NSW public schools.

In compiling the Encyclopaedia of Aboriginal Australia David Horton’s aim was ‘to create an Encyclopaedia of Aboriginal society in its own right as a complete system’ rather than as an object of Academic study (pxxi). This two-volume work would seem to have achieved this aim. When conferring on the Encyclopaedia its seventh award, the 1995 NSW Premiers Literary Awards ‘Book of the Year’, the judges likened Horton’s achievement to an Aboriginal dot painting, in ‘being distinct and vibrant and yet comprehensively and organically joined’ (The Sydney Morning Herald 16/9/95). Like a dot painting the Encyclopaedia is many layered and complex: meanings shift, depending on the writer’s viewpoint, as well as the reader’s, one follows tracks of information that lead to deeper levels of meaning, to off-shoots of the main story, or to deadends. Horton has built up a picture of the complex interconnectedness of the diverse fields of enquiry that make up the large interdisciplinary field of Aboriginal Studies.

Wellfare, S.
Review of ‘Encyclopaedia of Aboriginal Australia: Aboriginal and Torres Strait Islander history, society and culture’ edited by D. Horton
June 1997
44
74–75
Book Reviews
Download
You must be a member to download the attachment ( Login / Sign up )