Review of ‘Dingo Makes Us Human’ by Deborah Bird Rose 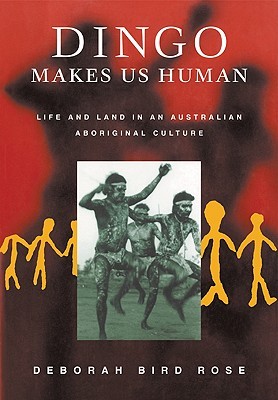 This is the first of two books by Rose dealing with culture and contact in the Victoria River region of the Northern Territory. While the book addresses many long standing issues in anthropology, the author’s research is an example of the current wave of anthropological writing, with its emphasis on community involvement, ownership and control. For the most part however, the author’s approach rests uneasily between the socially-informed writing of the new anthropology and the more disciplined and fine-grained ethnographies of her predecessors. Yet it does raise a number of issues of current concern to archaeology and for this reason deserves to be read, if cautiously.

Set within the pastoral lands of the giant Victoria River Downs station, the book tells the story of the people of the Yarralin community. Each chapter is an exploration of a particular facet of Aboriginal life, some of which are organised around the familiar themes such as social organisation, kinship and land tenure. Others take on more obscure titles like ‘Living and Dead Bodies’, which deal with aspects of Aboriginal thought and worldview. To her credit, the author has brought together material from a wide range of sources, including archaeology, to provide a framework for the ethnographic testimony.

Rose attempts to show how problems confronting contemporary society are grounded in past conditions and processes. An historical outline of the region is provided based mostly on archival and archaeological sources. Prior to European contact, traditional society is made out to be stable and ecologically balanced. This is contrasted with the period during and following the spread of pastoralism, which saw the Aboriginal population of the region decimated from several thousand to two hundred within fifty years of contact. The use of terms such as holocaust drive home the message that European’ colonisation in the Northern Territory was brutal and tragic, particularly in the initial stages of contact.

It is disappointing, however, that Rose reduces prehistory to less than half a page, and provides a very static summary of Aboriginal culture until contact.

Rose’s own account of contemporary society shows that within social structures and ceremonial institutions, relations between people are dynamic. The discussion of these structures is one of the highlights of the book, although it is puzzling that Rose doesn’t go beyond specific examples to a more general discussion of social change, which nonetheless appears to have a central place in her overall analysis.

Rose is not too concerned about ‘models’ of social organisation. Relationships between people, like relations to country, are said to be organised by the same basic principles, which she describes as ‘the meta-rules of balance, response, symmetry and autonomy’ (p.l05). These ‘meta-rules’ serve to keep the social system in check, by placing limits on ‘the ever-present desire to dominate’ (p.I05). Yet the rules are not watertight. This can be seen in the section on gender relationships, where Rose observes that marriages are arranged to provide a set of owners for a particular tract of country. In this way, responsibilities for country are handed from generation to generation, although this creates a social imbalance: ‘virtually all men want and need wives, but many women neither want nor need husbands’ (p.124).

Because of problems with the author’s methodology we have to take many of these interesting observations at face value. Rose claims that Yarralin people involved themselves actively in the research by using her as voice for their concerns. ‘Yarralin people have put considerable effort into teaching me because they hope the written word will become a vehicle for their oral testimony’ (p.40). Attractive as this may seem, the book cries out for additional information. Specifically, what role did the author play in presenting the oral testimony? How did she go about editing the large body of information which must have built up during the two years she spent working in the community?

The lack of any explicit theoretical framework raises a set of further questions about the author’s motivations in carrying out the research. Rose claims that her primary purpose in writing the book was to ‘bring clarity to a set of issues I understand to be important to Yarralin people’ (p.4l). This certainly allows the author to cast herself in the mould of socially-informed researcher but is that really as innocent as it sounds? How did she present herself to the Yarralin community? What were her initial research questions? To what extent were her own assumptions challenged, supported or contradicted as the research ran its course? In the absence of such information, the reader has to work backwards to disentangle Rose’s account from what Yarralin people said, and is left wondering how she arrived at particular interpretations of the data.

These concerns are heightened as Rose hits on a succession of fashionable bases, ranging from resurgent traditional culture to global ecology. It is difficult to believe that she could have obtained these data without prompting about specific issues, which reinforces concerns about her role in the research. Rose would have known that her data were constructed for a variety of reasons, although she disdains a rigorous methodology which would allow serious interpretation of them.

A charitable explanation is that Rose has been prepared to compromise her academic brief to give the hook more of an insider’s perspective. However, such a compromise between Aboriginal accounts and academic writing is rarely if ever achieved without concessions on both sides and it is misleading of Rose to ignore these. Indeed, it is unlikely that Rose’s written account will be understandable to the people she writes about. In the Northern Territory written accounts generally hold very little currency in Aboriginal communities, where adult literacy is virtually non-existent. For the most part, Yarralin people would have had to rely on Rose’s assurances that she got the story right.

Lack of accountability is an issue confronting both anthropology and archaeology. Yet given that reading back is barely an option for some Aboriginal audiences, it is appropriate to ask where does the researcher’s accountability lie?

Given the claim that Yarralin people were able to direct her in the research, I find it surprising that Rose gives so little credit to Aboriginal mechanisms for dealing with outsiders. This is most apparent when she uses the example (p.33) of an outsider who somehow became engaged in ‘unscrupulous financial practices’, leaving the community with a substantial debt. In Rose’s interpretation of the incident, Aboriginal communities are made out to be ‘particularly defenceless against outsiders’ (p.33) but I am not so sure that this is such an accurate reflection of current reality. Aboriginal communities certainly rely on outsiders to represent them in various ways, but this is not to say that they remain unaccountable for what they do or for their writing. Accountability lies not so much in the written word itself but in the types of services and resources it brings and perhaps more importantly, in the actions of the author and the relationships she formed.

These issues are not exceptional to ethnographic research. Archaeologists who work in similar situations in the Northern Territory have to grapple with similar problems. But there are no simple formulas for doing research or social justice agendas which can be applied in all situations. Like anthropologists, archaeologists must sit down and work out the ground rules locally with communities and landowners themselves. For their part, Aboriginal communities may show little interest in the researcher’s own notions of accountability or their academic brief. There may be tensions over control and ownership of research, but the hammering out of these tensions is in many ways inevitable if communities and researchers are to achieve a positive outgrowth.

These kinds of information would have been productive in helping the reader interpret Rose’s ethnography, and for others doing research in similar contexts, yet they are nowhere to be found in this book. This is one of many disappointments in a provocative book which claims to challenge dominant assumptions. However, for the most part, it is the author’s own assumptions which remain impenetrable. Nonetheless, I would recommend the book as an example of the problems facing ethnographic research at a time when archaeology is confronting many of the same issues.

Thorley, P.
Review of 'Dingo Makes Us Human’ by Deborah Bird Rose
December 1993
37
70–71
Book Reviews
You must be a member to download the attachment ( Login / Sign up )