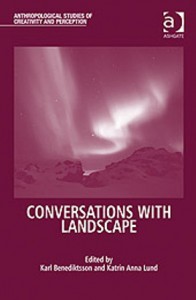 Edited by a geographer and an anthropologist, this book is part of an interdisciplinary series, Anthropological Studies of Creativity and Perception, edited by Tim Ingold that aims to open up lines of enquiry between anthropology and other disciplines. Here, the contributors to some 16 chapters are drawn from a wide range of backgrounds: anthropology, geography, environmental studies, philosophy, archaeology, literary studies and visual arts. Using the metaphor of a ‘conversation’ with landscape, much as we commonly refer to ‘communing with nature’, they seek to open up perspectives and strategies on human-landscape interactions, to search for alternative understandings; and in this case specifically those of Iceland, where the editors and many of the other contributors study, work and were raised. Via these approaches, which include and focus upon the phenomenological, the reader, having read from cover to cover, is left with powerful and complex impressions of the Icelandic world and landscape. So, how has this been achieved and how can we best understand it? To begin by using an analogy, unlike the rich and sometimes overwhelming experience of fieldwork for the archaeologist or anthropologist which becomes reduced, hidden or submerged and at times completely lost in the translation to text and final publication; in contrast here people’s experiences of Iceland are vividly communicated to us, opening up our own expectations. Rather than being objective and detached, here relational experiences are created between observers and their surroundings. Rather than merely defining the experience, we too are taken on the journey.

In investigating whether ‘conversations’ occur between people and landscape and what form they might take, the editors draw on phenomenological approaches and theory that discount dualism such as subject/object or mind/body and focus instead on the relations between the two, itself a kind of ‘conversation’. Rather than taking an objective stance towards the surrounding world or landscape, these embodied philosophical approaches view experience through the relationship that the body has, with all its senses, to its surroundings. Rather than definable and therefore ‘bound’, the landscape itself is perceived as in a state of becoming, imminent, ‘constantly unfolding … in a never-ending journey’ (p.6).

The chapters explore these issues with a wide variety of Icelandic examples, some of which are discussed below. In environmental debates about land-use, for instance, ‘aesthetic’ experiences and concerns have been little valued, being regarded as too subjective, not scientific. In these ways this echoes the traditional dualism of subjective/objective, while failing to appreciate that subjectivity resides in both; all observations are to some extent influenced by one’s perspective (pp.110, 114). In contrast to these more negative stances, philosopher Sigridur Thorgeirsdottir (Chapter 2) sees these ‘conversations’ with pristine natural environments and wild landscapes as profound ‘metaphysical experiences’. Throwing oneself into the icy sea and being carried or swept away by the force of its currents; wandering across a vast, inhospitable glacier that is forever moving and filled with huge cracks and holes: such experiences of awe, wonder, danger and of our fragile mortality, entwine us with the natural world. These ‘conversations’ with landscape she sees as reflexive conversations with ourselves, and with our embodied, transcendent experiences. Such experiences, she argues, lead to more reflexive and ethical attitudes, with contingent obligations, towards a natural world of which we are so much a part. On a more cautious note, environmental philosopher Gabriel Malenfant (Chapter 3), pointing to the limitations of such ‘conversations’, argues that while they are not true dialogues and that ethics require discourse, they allow for a moral repositioning of ourselves, in a less anthropocentric way, towards the natural world.

Arguing against the dualistic approach in environmental decision-making, philosopher Gudbjorg R. Johannesdottir (Chapter 8) opts for transcending the subject/object divide by suggesting that ‘the meaning and value of landscape is determined by the relationship or conversation that takes place between landscape and the people who dwell in it’ (p.110).That is, that the division between nature and culture is untenable, that ‘landscape’ is the interaction between the two, between the body and its surrounds; the intertwining of subject and object. This ongoing interchange forms a type of conversation that she explores as a kind of atmosphere, following phenomenologist Merleau-Ponty; much as we commonly talk of ‘a tense atmosphere in the meeting room’. Landscapes eliciting feelings of awe, wonder, fear and safety, for example, she sees as more than social constructions or objective phenomena.

Among the latter we can also add grief. By intertwining disparate strands of evidence and approach – structural/anthropological and historical along with the phenomenological – social anthropologist Arnar Arnason (Chapter 6) shows how grief, associated with deaths on the road and road safety, creates complex ‘conversations’ out of which landscape emerges. Here myth, supernatural experiences, memorial crosses and cairns, deforestation and the spread and growth of roads together with changing attitudes to road safety, are all woven together with Iceland’s historical identity. Feelings of loss, he argues, underlie the historical narrative, from colony to industrialised nation of today. Thus, complex landscapes emerge through time, through narratives, fusing the personal and the political. In these ways, ‘identities, individual and national, are constructed’ (p.84).

In historical fashion also, geographer Edda R.H. Waage (Chapter 4) argues that the traditional Icelandic concept of landscape or landslag can be traced back to the Icelandic historical sagas of pre-modern times and is distinct from the more recent English concept of landscape. Landslag (or landsleg), she continues, refers to the total appearance of an area ‘associated with an aesthetic expression or experience’ (p.51), and bearing a strong human-nature relation. Here there is no human/nature division. This contrasts with the more recent English concept of landscape that creates a culture/nature split as we have seen. Waage attributes the differences between the two concepts to their separate historical and socio-cultural origins: to early Icelandic subsistence farmers and seafarers who formed a close association with nature, as opposed to members of the European elite of the fifteenth and sixteenth centuries demonstrating their control over nature.

The case for a relational approach in archaeology is put forward by archaeologist Oscar Aldred (Chapter 5) who sees landscape as a convergence of multiple temporalities; and that the past is mediated through the present. A ‘boundary’, for example, cannot be seen as an ‘enclosure’ until the relations between it and its surrounds are understood. The relationship, therefore, is part of a process, a continuum of happenings; thus landscapes are a continuous, ever-becoming record. His archaeological case study, in a place of valleys, fjords and uplands, presents relationships between people and landscapes as entangled, ‘from the reflexivity during field work to the fluidity on the page’ (pp.75-76).

The complex interplay of the politics of ‘conversation’ is discussed by anthropologist Anne Brydon (Chapter 13) in a detailed examination of whaling and hydroelectric development in Iceland. She traces changing attitudes to non-human sentience, to whales and to highland environments, rivers and moors, from the 1980s to the present day. Popular Icelandic sentiment in the 1980s and early 1990s characterised international protests against Icelandic whale-hunting as irrational and romantic over-sentimentalising of wild sea-animals and their supposed intelligence. More recently, however, the rise in international tourism and interest in whale-watching, has led to a revision (although not a replacement) in attitudes towards non-human sentience. Later on in the 1990s, hydroelectricity schemes and heavy industry development, financed by foreign capital and backed by government, met the resistance of a newly-growing environmental movement winning increasing public support. In this changed climate, highland moorlands, rivers and their wildlife, once considered ‘barren waste’ and now threatened with development, were represented as active agents and at times as sentient. Brydon discusses the role of artists and performance as providing a voice to these concerns.

Interspecies conversations, namely of sheep and humans, are discussed by geographer Karl Benediktsson (Chapter 12). The landscape of the non-human is rarely considered and if attempted more often is seen through anthropocentric eyes. In Iceland the sheep was once the economic cornerstone to a country dependent upon meat, milk and wool, and is closely tied through time to processes of deforestation, high taxes and unmarketable meat. Here Benediktsson restores the sheep’s world to us via examples of subtle interactions between sheep, landscape and people. These include the behaviour of sheep during the shepherd’s long, hard mountain trek, the sheep’s preference for eroded habitats, and also for the wide, grassy verges of modern roads and the road surfaces themselves covered in salt, a sheep’s delight and problem for the motorist. These behavioural signs and patterns, linking sheep to environment, form the conversation.

Further chapters cover the following themes. Anthropocentricism and the objectification of wildlife, seals and seal killing are confronted and addressed via artistic performance, displays and film (Chapter 14). The aurora borealis is represented as a touristic and phenomenological experience of a wild landscape, more than a cultural construction (Chapter 15). (Bush) walking is seen as a narrative act itself, weaving together narratives, as a lived conversation of being and becoming (Chapter 7). Negative forms of aesthetic response, fear, dread, ‘ugliness’, evoke a different relationship to nature and lead to caring for what is otherwise passed over (Chapter 9). The modern, urban transformation of Iceland is reflected through narrative and in traditional paintings of landscape scenery prominently displayed in middle class town houses, transporting the land to the town (Chapter 10). The conversation of people and land through time is reflected in poetry (Chapter 11). Finally, included is an epilogue by Tim Ingold (Chapter 16).

The success of this volume lies in its drawing upon a wide, interdisciplinary set of ideas and approaches; of tying together, clearly and vividly, theory, case studies and examples. By introducing different approaches, such as the phenomenological, the reader’s worldview is destabilised sufficiently to give a fresh perspective. For the anthropologist and archaeologist, this volume points to ways of collaboratively joining and working creatively alongside those from other fields and schools of thought. And even more importantly, it allows them to import and integrate similar approaches and methods into their own research projects. Iceland too, at first glance an unlikely comparison, shares many themes and issues with Australia (and for an Australian audience), from the management of ‘wild’ landscapes to environmental politics. And its position at the edge of the world, like that of Australia, allows for an extra sharp clarity in experiencing and observing colonisation, land impact and ‘development’, among others.

With regard to archaeology, most of the case studies here have a connection and entanglement with the material world. This is the link to archaeology and out of which archaeological information and enterprise come into being. For as discussed in Chapter 5, archaeological material is part of an ongoing, seemingly endless process, entangled with the socio-cultural, phenomenological and wider environment, out of which landscape emerges. Examining the relations between these and the material world will throw light on the very processes archaeologists search for: how landscapes are formed and how ‘conversations’ between elements are sustained. As has been argued here and further in the volume itself, archaeology is more than the remains of the past; it fuses time, past, present and future. In viewing and experiencing relations and ‘conversations’ with landscape as shown here, we can hope to understand how these processes are enacted.