Review of ‘Continent of Hunter-Gatherers: New Perspectives in Australian Prehistory’ by Harry Lourandos. 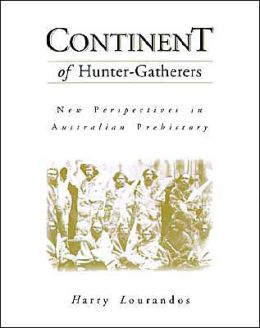 The scene was the Staff Club at the University of Queensland. A group of post-grad archaeology students was having a drink with Harry Lourandos. Suddenly, Harry pulls out this letter from CUP inviting him to write a text on Australian archaeology. He wanted to know what we thought. After a few comments such as ‘get real’ and ‘whose shout?’, Harry eventually left while we stayed on and celebrated. It’s been nearly a decade since that night and Harry Lourandos’s book has now arrived!

Fifteen years have passed since the last broadscale, academic text on the archaeology of indigenous Australia was published. While Josephine Flood’s Archaeology of the Dreamtime has kept the general public and students (and quite a few academics I may add) up to date with major findings since Peter White and Jim O’Connell’s 1982 text, a desperate need has remained for a higher level, scholarly synthesis of Australian archaeology. In Continent of Hunter-Gatherers, Lourandos not only has fulfilled this need admirably, he has produced the first synthesis of Australian archaeology embedded explicitly within broader theoretical debates on the nature and evolution of hunter-gatherer societies. While scope for such a synthesis has been aided by major advances over the last two decades in our archaeological knowledge base, the book owes most of its thrust to Lourandos’s social evolutionary views on the complexity and dynamism of Aboriginal Australia. His theoretically challenging views were aired widely in the 1980s, and became encapsulated in the so-called ‘great intensification debate’. Continent of Hunter-Gatherers is much more than an empirical update of that debate: it expands Lourandos’s socio-demographic model of cultural change and elaborately integrates environmental and social explanatory frameworks through more explicit reference to differing chronological and spatial scales of analysis.

The book is divided into three major sections: a theoretical introduction to hunter-gatherer studies and perspectives on Aboriginal Australians (Chapters 1 and 2), detailed regional overviews of sites and archaeological data (Chapters 3-7), and syntheses of major substantive and theoretical issues of local and international interest (Chapters 8-10). It is the first and last sections of the book which will have the most enduring impact on the discipline. Chapter 1 elaborates Lourandos’s theoretical views on archaeological approaches to defining and explaining long- and short-term changes in hunter-gatherer societies from environmental and sociocultural perspectives. Again, the important point is made that our models of past cultural change are tied directly to historical perceptions of the complexity, structure and dynamism of Aboriginal society. Lourandos sees the static, simplistic and somewhat environmentally deterministic paradigm which has dominated Australian archaeology as reflecting deep-seated 19th century colonialist constructions of Aboriginal primitivism. While I agree, couching the argument within the growing body of post-colonial literature, and particularly representational theory, would have strengthened the argument. Chapter 2 is a useful re-evaluation of the variability and organisational complexity of Aboriginal Australians in historic times, emphasising the effects of social dynamics on economic intensification.

Chapters 3-7 represent the substantive core of the book. Following an overview of evidence for earliest colonisation (Chapter 3), overviews of archaeological sites for the tropical north (Chapter 4), arid and semiarid zones (Chapter 5), the temperate south (Chapter 6) and Tasmania (Chapter 7) are presented. The regional chapters are divided into Pleistocene and Holocene periods, each beginning with a short summary of major environmental trends followed by critical summaries of major sites and developmental trends within sub-regions. The regional approach provided more scope for examining long-term evolutionary trends, particularly cultural responses to changes in bioproduction. While substantive chapters tended to be comprehensive and up-to-date, I was surprised to see no reference to Luke Godwin’s and Kierin Hotchin’s Ph.D. theses, which represent major regional studies. Furthermore, the time has long since passed where a synthesis of Australian archaeology can ignore unpublished consulting reports. Aboriginal Affairs Victoria has on file nearly 1000 reports alone! In terms of dividing chapters into the Pleistocene and the Holocene, I am not the first to note that the use of these broad geological time periods to frame cultural change isfast becoming conceptually redundant.

The final three synthesis chapters vary considerably in quality. I found Chapter 8, which focused on typological trends in stone implements, somewhat outdated. Here Lourandos missed an opportunity to show how Australian technological advances, such as Hiscock’s work in the Hunter Valley and at Lawn Hill, have provided significant insights for understanding inter-assemblage variation. The culture historical flavour of the chapter seemed at odds with the rest of the text. In marked contrast, in Chapters 9 (Interpretations) and 10 (Concluding Perspectives), Lourandos skillfully pulls together previous chapters in a synthesis of major substantive and theoretical issues that will influence Australian archaeological research agendas well into next century. A key issue is why no simple correlation exists between changes in bioproduction and changes in population density and social complexity. It is difficult to disagree with Lourandos’s theoretical stance that human-environmental interaction is mediated by socio-cultural factors. The suggestion that these factors can themselves be the product of long-tenn, and perhaps even regionally specific, historical trajectories provides enormous scope for future archaeological research in Australia.

The book is well written and highly readable, with good use made of figures and tables. The poor quality of some figures was surprising, however, as was the new location for Lake Keilambete (Fig. 6.10). The excellent flow of the book owes much to Lourandos’s deep understanding of archaeological and anthropological theory, which has allowed him to construct a cogent, stimulating and challenging view of Australia’s Aboriginal past. Continent of Hunter-Gatherers marks a maturing of Australian archaeology, where old research agendas built around prospecting for Pleistocene dates has given way to more theoretically challenging explorations of hunter-gatherer cultural dynamics. Despite the book’s explicit theoretical bent, the broad coverage given to basic site data and general issues of Australian archaeology will ensure its place as compulsory reading not only for Australian archaeologists (both students and professionals), but for all those interested in Aboriginal studies.

McNiven, I.
Review of ‘Continent of Hunter-Gatherers: New Perspectives in Australian Prehistory’ by Harry Lourandos.
December 1997
45
66–67
Book Reviews
Download
You must be a member to download the attachment ( Login / Sign up )