Review of ‘Climate Change: The Science, Impacts and Solutions’ by A. Barrie Pittock 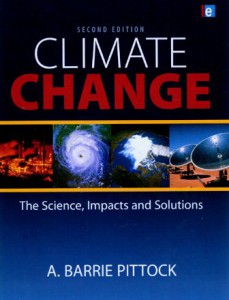 The dilemma: what to read about climate change and what to recommend to one’s colleagues. The literature is enormous and controversial. The mention of climate change no longer automatically triggers thoughts of a normal part of earth history, but has become synonymous with global warming and in particular human-induced warming. Pittock’s book is about human-induced warming.

Archaeologists in particular are aware that throughout human history, periods of cold generally had negative effects on humans, while periods of warming most often had positive effects. Australian archaeologists who have written on the subject (Rhys Jones, Iain Davidson, Ian Lilley and myself) have therefore tended to be more critical/sceptical of human-induced global warming (I do not use the terms ‘deniers’ or ‘contrarians’ which have special meanings in the debate, e.g. pp.69–73).

For a traditional discussion of climatology in Australia and New Zealand, I recommend Sturman and Tapper (2006) as a more useful text. First published in 1996 this has been adopted as the standard for many universities in Australia and New Zealand. Of a text of 500 pages, the last 100 pages deal with climate change and variability in a much more sober manner than Pittock’s book. In the final paragraph Sturman and Tapper (2006:494) note climate change ‘has become politicised … [and] the human side of the problem is surely as complex as the environmental aspects; the prospect of climate change raises a new set of questions about energy consumption, population growth, living standards, and other crucial aspects of society’. For the anthropologist/archaeologist Hulme’s (2009) book, in which he treats climate change as an idea as much as a physical phenomenon, may also appeal. Singer and Avery (2007) also provide a convincing case that climate change is part of a natural cycle and Plimer (2009) provides a controversial counterpoint to Pittock, writ large (500 pages, 230,000 words and 2311 footnotes).

The back cover of Pittock’s book claims that ‘climate change is a reality’ (but as already noted this means human-induced global warming). Barrie Pittock led the Climate Impact Group in CSIRO until his retirement in 1999 and contributed or was the lead author of all four major reports for the Intergovernmental Panel on Climate Change (IPPC). In the acknowledgements, Pittock notes that much of the book is paraphrased from the IPPC reports, though with substantial updates. The book is also an update of his book Climate Change: Turning up the Heat (2005) which he claims ‘found a niche as a tertiary textbook in many multi-disciplinary courses, where its objectivity and comprehensiveness were appreciated’ (p.xiii). The second edition is certainly written as a textbook. The format of the first edition is octavo size; the second edition is quarto and two columns. The chapter and subchapter headings are basically the same. The 2009 version has one less chapter – Chapter 13 ‘Further Information’, is replaced by extensive endnotes at the end of each chapter (650 in all).

It is difficult to review a book of this nature because of the extent of the material covered (and therein lies a weakness; some sections are treated more cursorily than others) and the issue of human-induced warming has developed to a point where it is difficult to hold a neutral position. Both Pittock and I have our biases and to an extent I will focus on these. Pittock’s position on human-induced global warming is spelt out in the Introduction and Chapter 1 opens with three alarmist accounts. But Pittock’s position is clearest on page 270: ‘The first key issue is whether we have something urgent to do about climate change, and if so, what. The answer hinges on how credible the science is, and what it means in terms of risk to us, and to our children and grandchildren. Despite all that the contrarians have thrown at it, the science is credible’.

Chapter 2 is about learning from the past and is very short. Archaeologists would find this disappointing. The ‘hockey stick debate’ is dealt with in only a cursory fashion on page 37 and in endnote 29. A quick search of the literature on this topic reveals numerous papers and reports that question the very honesty of some scientists and the way science is currently practiced. Chapter 3 asks; How good are the climate models? After much twisting and turning we learn they are ‘far more reliable than handwaving arguments about climate made by some sceptics …’ (p.56).

Chapter 4 is very short and is about risk. Here it is noted that ‘What we are concerned about is the probability of changes that push us over the threshold into these extremes’ (p.65). Climate change thus seems to be about increases in extremes. In this chapter it is also noted that ‘the public perception of the debate over climate change has been shaped by the media’s common adherence to a doctrine of ‘balanced reporting’. This tends to give equal space to the considered judgements of the scientific community, expressed in peer-reviewed publications such as the IPPC reports, and the often completely un-refereed opinions or advocacy of a contrarian minority’ (p.73). To keep a ‘balanced’ perspective on a daily basis the website http://climatedebatedaily.com/ is a good starting point. Plimer’s (2009) book also offers a counterbalance.

Chapter 5 is a short chapter on what climate changes are likely. Again the issue of extreme events is discussed (pp.84–87). This should be read in conjunction with the work of Nott (2006), for example, who offers evidence that cyclones, floods and erosion have occurred in the past at levels much larger than those observed in the present. One does have to wonder about the science and the difficulty of making policy decisions when Table 6 has estimates of sea-level rise for 2100 which range from 9cm–5m. Chapter 6 is about impacts and reasons for concern. On page 125 Pittock notes that rapid sea-level rise could continue until both Greenland and the West Antarctica Ice Sheet are more or less completely melted, leaving the world with a sea-level rise of up to 10–12m lasting for millennia. But this is a conclusion built on many assumptions.

Chapter 7 on adaptation is one of the shortest chapters at just 13 pages and 17 footnotes. Archaeologists would again find this disappointing. Chapter 8 is long at 58 pages, with 188 footnotes and I personally found it the most interesting for the sheer range of new and exciting technologies being developed for reducing carbon emissions. But here there are also points of irritation. For example, a generally positive account of biofuels is provided (pp.182-185), but it is not difficult to find contrary views suggesting that arable land used for biofuel production should instead be used for providing food for the hungry. Chapter 9 attempts to place climate change in context and to me provides one of the most useful statements in one of the three opening quotes that are a feature of each chapter:

climate change is only part of a broader multi-stress setting of global through local changes. Privileging climate change policies over other concerns leads to tragic outcomes. Climate policies need to be designed for and integrated into this broader and challenging context (Dowlatabdi 2007).

Chapter 10 is about the politics of greenhouse warming and the contrarians come in for another blast with, ‘the weight of evidence that global warming is happening, and is in large part caused by human action, is now overwhelming, even if the details are still uncertain’ (p.241). It is noted that a number of scientists ‘are going beyond their IPPC role as uncommitted scientists to exert their rights as citizens to make value judgements informed by their scientific knowledge’ (p.245), and thus inform the public of the crisis. But no mention, for example, is made of over 31,000 American scientists who have signed a petition drafted by the Oregon Institute of Science and Medicine, that there is no convincing scientific evidence that humans are disrupting the Earth’s climate (www.petitionproject.org). A response to some of the latest Rudd government policies on climate change by Bob Carter and colleagues (2009) is also useful.

It is critical to get cause and effect right in this debate because disastrous policy decisions can be made where the wrong cause and effects are identified. There have been a multitude of scares in the past (e.g. Booker and North 2007; Hulme 2009:91) which follow a similar pattern. A threat to human welfare is exaggerated beyond the scientific evidence (which is uncertain) in collaboration with the media. A tipping point then occurs where politicians marshal the machinery of government in a disproportionate regulatory response which is difficult to alter until contrary scientific evidence becomes overwhelming.

A critical issue for the future is that moderate to conservative demographic projections indicate that global human numbers could reach nine billion (or more) by mid-to-late twenty-first century (i.e. half as many people again as already exist). And many of the poorest countries continue to drive their economies out of poverty through highly polluting industrial development. But it is rare to find explicit discussion about population policies as part of the many debates about climate change (Hulme 2009:270), and Pittock’s contribution is limited (but see pp.229-231). Yet population growth, density dependent impacts and expansion in levels of extractive industries must be critical in this debate.

Barrie Pittock, in his retirement, is to be congratulated for updating his original book. The second edition is wide-ranging and comprehensive on the issue of human-induced global warming. He has tried for objectivity and has mostly been successful. However, there is no easy way through this debate. Personal views, ideologies and politics now infiltrate the debate at most levels. Archaeologists might find Pittock’s book useful to have on their shelves, but for a broader perspective they might also consider Booker and North (2007), Hulme (2009), Plimer (2009), Singer and Avery (2007), and Sturman and Tapper (2006) among many others.

Booker, C. and R. North 2007 Scared to Death: From BSE to Global Warming: Why Scares are Costing us the Earth. New   York: Continuum.

Dowlatabadi, H. 2007 On integration of policies for climate and global change. Journal Mitigation and Adaptation Strategies for Global Change 12(5):651–663.

Michael J. Rowland
Review of ‘Climate Change: The Science, Impacts and Solutions’ by A. Barrie Pittock
December 2009
69
85-87
Book Reviews
You must be a member to download the attachment ( Login / Sign up )