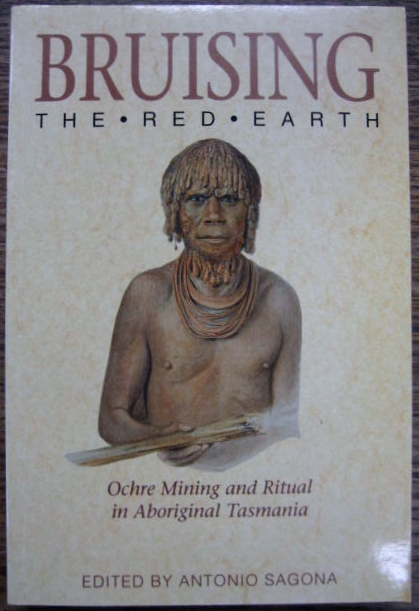 Bruising the Red Earth is essentially a report on archaeological explorations at the ochre mining site of Toolumbunner, Tasmania. This famed ochre quarry holds great significance to local Aboriginal communities, both today and in the past. Knowledge of Toolumbunner was reported in Robinson’s journals, while the use of red ochre for personal adornment was repeatedly noted by non-Aboriginal explorers in Tasmania. This book thus makes use of various lines of enquiry – the significance of red ochre to Tasmanian Aboriginal people, the ethnohistoric record and archaeological researches – to investigate Toolumbunner in the social landscape of pre- and proto-contact Tasmania.

The book is divided into seven chapters. The first, by M. McKay, is an interesting description of the rediscovery of Toolumbunner. The second chapter is a general discussion by Sagona of the position of the colour red in human evolution and in the human psyche. We are presented with an extensive (but not exhaustive) consideration of the symbolic use of the colour red among various and diffuse cultures across the world. Sagona concludes that red ochre has been used across the world for at least 300,000 years, and that this use was likely to be both decorative and ritual in purpose. The colour red, in particular, is said to hold a particular attraction to humans, being ‘the most salient primary colour the human visual system can perceive’ (p.9). For psychophysiological as well as for symbolic reasons (i.e. red = blood), the colour red predominates in human life.

Chapter 3, by J. Webb, I. Thomas and K. Thiele, returns to Toolumbunner with a description of its geographical setting. This is an excellent chapter essentially on the geology and vegetation of the area, and sets the scene for the next chapter on the archaeological excavations at the site. Chapter 4, by Sagona and Webb describes the excavations as well as the geochemistry of local ochres. This is followed by Chapter 5, an analysis of the finds from the archaeological excavations by Webb, McKay and Sagona.

Unfortunately, although this chapter contains some excellent sections (in particular, on the geological identification of stone types and on the manufacture of ballywinne stones), it is also by far the worst chapter of the book. The fairly long discussion of the flaked stone artefacts would have to be the worst analysis of stone artefacts I can remember. Indeed, the author(s) of this section do not appear to be aware of any of the (recent) advances in lithic analysis. Flaked stone artefacts are simply categorised into one or another type of ‘scraper’, without any discussion whatsoever about the reality or non-reality of those types (what my colleague Bryce Barker calls ‘the left-handed nose-picker’ approach to lithic analysis). This is despite being told that ‘the tools themselves [were analysed] within the context of a strict methodology’ (p.79). The graphs used to present the data are difficult to read (e.g. cumulative histograms would have been a better choice). One is left to wonder to what degree the ‘types’ are a product of the authors’ own creation. This section is littered with statements such as ‘it is possible that the areas of Trenches I and IV were occupied by different groups’ virtue differences in lithic types. The analysis presented in this section represents what is for me the worst in lithic ‘analysis’ – a total failure to address issues, a simple categorisation (not even a characterisation) for its own sake. Indeed, the summary on p.114 represents the worst in archaeology, not simply in lithic analysis, being a continuous abuse of the evidence with statements such as ‘the lack of animal bones and teeth excludes the butchering of carcasses’ (what about other parts of this large open site; what about taphonomic problems, such as the non-preservation of bones in many open sites?). This large section is unfortunate, for the rest of the book is interesting and a pleasure to read.

Bruising the Red Earth moves on to Chapter 6, with Sagona and Webb’s discussion of Toolumbunner in a broader perspective of systematic ochre quarrying in other parts of the world (concentrating on Australia). Mainland Australian and Tasmanian economic networks are briefly discussed with considerations of trade and exchange in history, and the role(s) that ochre may have played in the past.

In the final chapter, Sagona briefly concludes with notes on material symbolism (including red ochre) in ritual activity (including an engendering of mining behaviour at Toolumbunner).

My overall impression of, and reaction to, Bruising the Red Earth is multiple. At last, an interesting, detailed and well presented site report! If five sites are excavated in Australia every year, 75 sites must have been excavated since 1980. Where are the site reports’? Secondly, Sagona and his co-authors go beyond the site report, addressing Toolumbunner in a broader social (and indeed global) perspective. Thirdly, this study makes excellent use of geological and vegetational information, once again showing the value of multi-disciplinary research. And for the first time, a detailed study of systematic ochre mining in pre- and proto-historic Australia has been produced. Such studies have enormous implications for past social networks, for an understanding of social landscapes in and through prehistory.

On the negative side, however, I felt that the different scales of investigation site, regional and world perspectives – were not well integrated. It’s as if the book could have done with a bit more work, with more drafts. And as must be obvious from my previous comments, the lithic analysis is appalling. And last but not least, I also felt that not enough emphasis had been given to the time perspective. We are told that ochre mining at Toolumbunner was at least 500 years old, but the excavations never appear to have tried to resolve or further define its antiquity. Pity, given that this is archaeology’s forte.

All in all, I certainly recommend this book, but for a variety of reasons. It would be an excellent book for students to review (given both its strengths and shortcomings), for Tasmanian archaeologists to familiarise themselves with an important and hitherto largely ignored aspect of Tasmanian history, and for archaeologists in general to follow this excellent example of how social (as opposed to economic) factors are crucial for a proper understanding of the archaeological record.

David, B.
Review of ‘Bruising the Red Earth: Ochre Mining and Ritual in Aboriginal Tasmania’ edited by Antonio Sagona.
June 1999
48
64–65
Book Reviews
Download
You must be a member to download the attachment ( Login / Sign up )