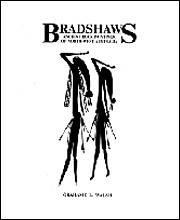 Bradshaw rock paintings of small (usually) red human figures wearing a range of ceremonial regalia and which appear to ‘float’, have long been recognised as a highly distinctive style of rock painting – especially in the degree of figurative detail and the technical skills of the artists. A unique feature of the Bradshaw paintings in comparison to other Australian rock art is that the feet invariably point in the same direction. Bradshaws also predate the historical Wandjina rock painting tradition and the associated Wandjina ideology. The fact that Bradshaw paintings are of unknown age has added to their mystique.

The Kimberley region in the northwest of this continent is the most likely point of contact for new influences or peoples moving into Australia. The Bradshaws could therefore represent outside contact. However, if very similar rock art styles have appeared at different times and places throughout the world, independent invention is a much more parsimonious explanation. There is no real reason to invoke non-Aboriginal artists to explain the Bradshaw paintings and certainly no reason to assume this. Then, of course, there is the evidence from Western Arnhem Land.

The rock art sequence in Western Arnhem Land is long, complex and largely undated. There are also many parallels with the Kimberley. In both regions, the oldest surviving rock art comprises deeply weathered pecked cupules, while the oldest surviving paintings are large paintings of (mainly) animals. Later the Arnhem Land rock painting sequence features Dynamic/Mimi figures, which have many parallels with classic Kimberley Bradshaw paintings.

These resemblances are so many and so specific that some researchers have suggested that these two regions were once part of a single rock art province. In fact, Darrell Lewis (1988) has argued that the widespread and relatively homogeneous character of the Bradshaw/Dynamic painting style means that the style probably dates to a time of low population density and environmental stress right across the Kimberley/Victoria River/Arnhem Land area. He suggests that they may date to the height of the last glacial maximum. This is another circumstance where a little bit of hard evidence is going to outweigh a lot of speculation. (A dating program for Kimberley rock art is currently in progress, see Morwood et al. 1994).

Given this background, what is the value of Grahame Walsh’s latest book? Firstly, it puts on record many more examples of Bradshaw paintings. The book is 285 pages in length and of these 197 are devoted to full-page colour photographs (mainly of Bradshaws) and accompanying extracted line drawings. Walshhasspentsome18yearstrackingdown rock art sites in the Kimberley, and this book shows some of the results of this work. There is much here for Aboriginal communities, scholars, artists and the general public. Overall, this is a beautiful book about beautiful art. The standard of rock art photography is only matched in Australia by that in Walsh’s previous book, Australia’s Greatest Rock Art, and by George Chaloupka in his masterly Journey in Time, which syntheses his long-time study of rock paintings in Western Arnhem Land.

On the downside, the text is uneven. When dealing with his speciality, rock art and its environmental context, Walsh is unsurpassed. In his general Kimberley research, he has gone to extraordinary trouble to obtain accurate recordings of rock art sites and their cultural contexts, to work out a relative rock art chronology based on superimpositions, to document the history of rock art research in the region, and to understand Kimberley Aboriginal ethnography (especially Wandjina ideology). Thus the chapters in this book dealing with the Kimberley setting (Ch. l), the history of Bradshaw discovery (Ch. 2), the Kimberley rock art sequence (Ch. 3), pre-Bradshaw art styles (Ch. 4), and the Bradshaws (Ch. 5), are informative and well constructed. Most of the data given on the rock art sequence are also based upon his own detailed field observations.

The final three chapters tackle the questions ‘Who were the Bradshaw artists? (Ch. 6), ‘How did they arrive and what happened to them? (Ch. 7) and ‘How old is Kimberley rock art? (Ch.8). To all these questions a straightforward answer, given the current state of knowledge, would be ‘We don’t know’. Instead, Walsh is determined to make a political point – that during the long prehistory of the Kimberley region, there are likely to have been (many) major changes in the ethnic identity of the people living there. He therefore argues that we cannot assume that the ancestors of the present-day Aboriginal people were responsible for the Bradshaw paintings.

This view is clearly stated in the text (p.57) and is also apparent in his proposed schema for the Kimberley Rock Art sequence by which all rock art periods are placed into three broad epochs separated by major breaks in style, theme and technique (i.e. Archaic, Erudite and Aborigine). Only Wandjina and preceding Clawed Hand painting styles are attributed to Aborigines in this schema, while Bradshaw paintings are all firmly positioned in the preceding Erudite (i.e. non-Aborigine) Epoch.

There seems to be some confusion on the part of Walsh between the terms ‘ethnic’ and ‘race’. He is cautiously guarded in pointing out that we cannot be certain about the ethnic identity of the Bradshaw artists, but the ‘mystery race’ interpretation has received much heavy-handed publicity in the general media, as well as adverse comment from the Australian archaeological community. For instance, in a press release from the Australian Archaeological Association, Dr Andre Rosenfeld is quoted as saying: ‘It is the aesthetics and elegance of the figures that is being used to substantiate a non- Aboriginal authorship for these works’. She continues by noting that such a conclusion is ill-founded given the internationally-recognised aesthetic value of much contemporary Aboriginal art.

The human prehistory of the Kimberley region certainly involved cultural, technological, linguistic, artistic, and genetic changes. For instance, at various times, local population extinctions and replacement seem to have occurred as a result of climatic fluctuations and environmental deterioration during the Pleistocene (O’Connor 1990). The sheer linguistic complexity of the region today also indicates that the cultural sequence has been complex and probably involved contact and genetic input from adjacent areas of SE Asia. To argue for human cultural and genetic continuity in the Kimberley region over a minimum of 40,000 years, is to argue for a degree of conservatism without parallel anywhere else in the world and which is at odds with the current archaeological record. Even so, there is no basis for ascribing Bradshaws, or any other prehistoric Australian rock art, to any other than the ancestors of contemporary Australian Aborigines.

It is worth noting here that at the time of European contact there was significant cultural, linguistic, artistic and genetic variation between indigenous groups across Australia, but all were by definition ‘Aboriginal’. Similar chronological variability between Aboriginal groups is evident in the archaeological record. If the Bradshaws prove to be relatively recent in age (i.e. Holocene), as preliminary AMS determinations would suggest, then one could argue for a fairly direct line of Aboriginal descent from Bradshaw artists to present-day local people. If the Bradshaw paintings prove to be much older, for instance if they were to predate the last glacial maximum and the associated depopulation of the region, then the Aboriginal line of descent is less direct, but still clear.

Rather than explaining changes in the rock art sequence in terms of ethnic/racial replacement, however, an alternate and simpler explanation for the Bradshaw paintings might be their association with a prolific, but short-lived cult – either homegrown or resulting from outside contact. A number of such cults are known to have spread throughout the Kimberley region during recent times and are evident in the most recent rock art phase. At least two show definite Indonesian influence (see Crawford 1969).

If you are interested in Australian rock art, you must have this book on your shelf. The Bradshaw paintings of the Kimberley region are exquisite and Walsh is a consummate photographer with a fanatical eye for detail. The volume is expensive, but once out of print, I predict that it will quickly become a valued collector’s item. Despite some problems, the book manages to convey a sense of mystery, as well as the excitement of discovery. We all need this from time to time.

O’Connor, S. 1990 30,000 years in the Kimberley: A prehistory of the islands of the Buccaneer Archipelago and adjacent mainland, west Kimberley, Western Australia. Ph.D. thesis. University of Western Australia, Nedlands.

Morwood, M.J.
Review of 'Bradshaws: Ancient paintings of north-west Australia’ by Graeme L. Walshe
December 1996
43
47–48
Book Reviews
Download
You must be a member to download the attachment ( Login / Sign up )