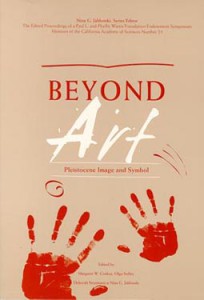 Beyond Art: Pleistocene Image and Symbol is a global survey of archaeological practice, and the contexts of Pleistocene symbol production. It combines papers presented at three international meetings on Pleistocene image making and is sensibly organised into four sections.

In the first section, ‘Analytical methods: From dating to technologies of image making’, Watchman presents an overview of Australian and European developments in direct dating and chemical analyses of rock paintings and engravings. Clottes then draws on recent European Palaeolithic studies to illustrate the potential and the limits of new techniques for direct dating and analyses. Clottes finds that interpretation of Palaeolithic painting will be refined and redrawn with new techniques but this will take some time because of financial, methodological and statistical considerations. Next, Marshack combines analyses of markings with other archaeological evidence and concludes that conceptual relationships existed between the people who created the symbolic revolution in Europe’s Upper Palaeolithic and early agriculturalists in the Middle East. Lastly, White illustrates how deconstructing prehistoric technologies through detailed observation and experiment can be combined with contextual archaeology and ethnographic analogy to construct interpretative arguments. His case studies aim to clarify the contexts of production, use and disposal of Aurignacian beads and Gravettian figurines.

The second section, ‘Approaches to the “why’s” [sic] of presence and absence’, begins with Davidson’s review of late Pleistocene Europe and Australia. He finds a common sequence of development, in that place marking follows the earliest evidence of personal ornamentation. Davidson also suggests it may be possible to distinguish regionally independent developments of fishing-hunting-gathering and agriculture. Next, Bar-Yosef explores Upper Palaeolithic and early Epipalaeolithic symbolic items from south-east Turkey and Egypt, where rock paintings and engravings are scarce. Bar-Yosef considers why symbolic representations proliferated in Pleistocene Eurasia and Australia while emerging in different ways later in other regions. Gonzirlez Morales then examines the end of parietal imagery in Cantabrian Spain within an analysis of more traditional ‘Palaeolithic art’ studies. He argues for diachronic studies to permit historical accounts of dynamic regional developments of economic and symbolic activities.

In the third section, ‘Interpreting regional imagery in the European Upper Palaeolithic’, Clottes first compares claims concerning prehistoric choice of location for image production with taphonomic, regional, chronological and locational variation. He concludes that ‘art in the light’ can be seen to vary little, while in the middle and later Magdalenian periods, use and ornamentation of deep and difficult caves intensifies. Mussi and Zarnpetti then examine chronological variation in volume and distribution of engravings on rock walls and slabs, portable images and personal ornaments from Palaeolithic sites in present-day Italy. They suggest that while retaining local characteristics, there are a number of similarities with south-westem Europe during the late Pleistocene and early Holocene. Finally, Soffer studies portable objects and images from Central and Eastern Europe. There are changes over time in the production, use and characteristics of these artefacts which point to an active role for images in a dynamic social landscape.

In ‘The interpretive process’ Tomaskova identifies silent and historically formulated assumptions within archaeological concepts and practices. Tomaskova suggests that an increased awareness of archaeology’s ethnocentrism may allow different research questions and frameworks to develop. Rosenfeld explores Australian Aboriginal ethnography for help in interpreting prehistoric rock paintings and engravings. Rosenfeld argues that as meaning varies according to kind and social context, anthropological information needs to be carefully contextualised. Parkington and Manhire then present their analysis and interpretation of western Cape rock paintings from southern Africa. Interpretive descriptions of paintings are used to argue that social occasions and status can be inferred from the paintings. Next Lewis-Williams explores the potential of his shamanistic hypothesis in the context of Western European Upper Palaeolithic rock paintings. He argues that his hypothesis is sensitive to diversity through time, space, social sphere and iconography, and that changes in shamanic beliefs and social relations are discernible. Finally, Conkey discusses major themes addressed by contributors to this volume in the final chapter. Context is itself conceptualised, particularly in relation to archaeology’s own fundamental concepts and assumptions. Conkey argues that these issues are not just crucial to contemporary research about early prehistoric imagery and symbolism, but central to archaeology generally.

Soffer and Conkey’s introductory essay traced changes in the archaeology of Pleistocene image production and use. They effectively formulate a programme for investigating pre- historic imagery which provides a standard for assessing the book’s varied analyses. Soffer and Conkey argue that interpreting ‘meaning(s)’ from prehistoric images is no simple translation exercise, but one responsive to close archaeological analyses of images in context. Much of their argument follows from recognising that symbolic meaning is arbitrary, and culturally determined. These authors demonstrate the limiting effects of unwarranted uniformitarian assumptions contained in the term ‘art’. They also advocate a global perspective to reorient research away from south-western Europe’s artificial dominance. Eschewing monolithic explanations and interpretations, their global perspective relies on localised and historic accounts.

The main editors contend that producing symbols is a modern human behaviour, one that did not exist for all time. Discussing the significance of the absence of habitual image making prior to 40,000 BP, Soffer and Conkey argue that hypotheses requiring prior image making in perishable materials are untenable. They suggest archaeologists can do more with the materials they have rather than focusing on problematic hypothetical scenarios.

Soffer and Conkey argue that several hypotheses concerning early image have conflated two components of behaviour, capacity and performance. In their view, performance does not necessarily follow capacity, it depends on contextual circumstances. They suggest that isolated, unique objects from the middle Palaeolithic may indicate that a capacity for symbolic organisation of life was present but not habitually used. Instead, the social context within which performance would have effective meaning was absent.

It is difficult for me to believe that the capacity for symbolic organisation may be present but not practised within and upon the material world in some way. If a society is symbolically organised, surely some aspect of this behavioural phenomenon, not necessarily image making, will be archaeologically visible. For archaeologists, the issue remains one of symbolic mediation fixed in the durable material world. The absence of repetition, or visible patterning of any kind of symbolic exchange, remains problematic for claims made about unique middle Palaeolithic non-utilitarian objects (cf. Noble and Davidson 1996:210).

The work collected in this volume illustrates an increasingly self-critical and global practice, which is moving to- wards greater accountability. Generally the works presented mesh well with the epistemological stance provided by Soffer and Conkey, whose introductory comments highlight these consonant elements. The editorial approach is inclusive of difference, accepting provisional outcomes in the interest of fostering debate. It is also apparent, however, that if plausibility remains a goal of archaeology, then shifts and developments within the field are somewhat uneven.

For example, most authors endeavour to produce meaningful prehistory which is not contingent on knowing what images meant to those who made them. Generally, ethnography is sparingly used, assumptions are made explicit and substantiated by reference to experiment or other research spheres. Even so, Parkington and Manhire’s archaeology is embedded in San ethnography, from which they take a vocabulary for conventions. This is used to directly interpret events and their significance from rock paintings. In a similar vein, by relying on close ethnographic readings, Lewis-Williams’s shamanic hypothesis also ignores the mutable, arbitrary characteristics of symbols, even those produced from hallucinatory experiences. Social contexts are mutable in his account, but not the fact of shamanism itself.

Some new, exciting analyses remain embedded in interpretive frameworks from archaeology’s own intellectual past. For example, there is a longstanding ‘category of sanctuary’ research question where the concept of sacred and profane uses of space predominates. Location as a correlative aspect of painting and engraving is a credible research direction, yet Clottes’s repeated use of the term ‘sanctuary’ to describe caves with paintings and engravings blurs the fact that this remains a speculative claim about past use of such caves. Moreover, Clottes is one of several authors in this volume who use the term ‘art’ in spite of convincing argument concerning the limiting effect of its underlying assumptions.

Finally, Marshack’s arguments about artefacts from several Middle Eastern archaeological and chronological contexts are flawed. He presents no contextual archaeological evidence to support his interpretation of marks on a flint cortex plate from Quneitra dated to 54,000 BP. While we are told that the pattern of lines on the Quneitra flint was determined by microscopy, photographs and a drawing of the object do not include a scale or degree of magnification. (This lack of information about scale or magnification is equally a problem in a number of other papers in the book). Somehow I worry that if a microscope at unknown magnification is needed to determine a pattern of lines, then how much of that pattern can we assume was meaningful for the people who produced the lines, and who did not own microscopes?

Beyond Art: Pleistocene Image and Symbol is a composite work subtly reorienting the focus on early image making towards questions which potently address circumstances surrounding Pleistocene image production and use. The book demonstrates the global processes emerging within the archaeology of Pleistocene images, intersected as these are by regional and local studies. Irrespective of the flaws commented upon, every paper in this volume represents aspects of exciting possibilities for future research. In addition Soffer and Conkey effectively set out a coherent statement of theoretical principle which provides a crucial baseline for prehistoric image studies. In conclusion, I would recommend the book to all those actively interested in Pleistocene image and symbol.

Conroy, L.
Review of ‘Beyond Art: Pleistocene image and symbol’ edited by Margaret W. Conkey, Olga Soffer, Deborah Stratmann and Nina G. Jablonski
December 1998
47
71–73
Book Reviews
Download
You must be a member to download the attachment ( Login / Sign up )