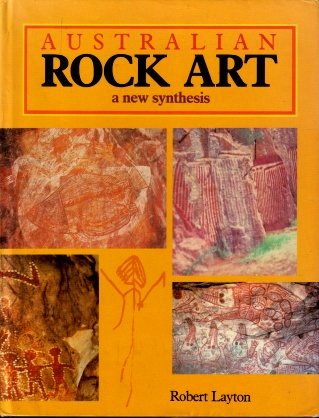 The focus of Australian Rock Art is the role that rock art plays today, and has played in the past, in Australian Aboriginal societies. This is approached from two perspectives: anthropological and archaeological. The author views rock art as a cultural artefact which visually encodes social information and his interpretations of the role rock art played in past societies are based on understanding the relationship between patterning in social behaviour and patterning in rock art.

This chapter also considers the on-going debate in the archaeological literature on the utility of ethnography for archaeological analyses of rock art. Layton’s own position is that the durability of rock art and its continued significance for Aboriginal communities makes it most suitable for collaborative effort between anthropologists and archaeologists (see also Morwood 1992 for cogent description of this general position).

On the other hand is the ‘pure archaeology’ approach of Clegg (1977) and Maynard (1979), who argue persuasively that neither the intended subject nor motivation can be securely discerned from rock art. In fact, Clegg (and Cleggians) use the typographic convention of an exclamation mark before their own categorisation of motifs (e.g. !track, !trident and so forth) in order to signal that they do not believe that their categorisation is necessarily indicative of the artist’s original intent.

So far, this convention has not been adopted en masse by rock art researchers, and I think this may be because information is being encoded at two levels and this inhibits easy translation of the primary message. In this volume Layton’s solution is to adopt the convention judiciously throughout the text: the general caution is thus formally communicated at intervals but this does not inhibit the flow of the written text. In any case, Clegg’s point has been well absorbed into the literature on Australian rock art: few people researching rock art today would argue that their interpretations of either subject or motivation are necessarily those of the original artists.

Layton does take issue with Maynard’s (1979) contention that rock art in most parts of Australia is a prehistoric artefact and he points out that her paper was written before land claims in the Northern Territory enlarged anthropologists’ understanding of the endurance of Aboriginal attachments to land and the continuing significance of rock art for many Aboriginal societies. I suspect that this is a point which Maynard herself might now be willing to concede.

On-going discussions throughout this book reveal the variety of ways in which rock art can be culturally significant to Aboriginal people. This theme is especially well articulated in Chapter Three which considers rock art as an expression of secular and subversive themes. The absence of detailed discussion of sacred rock art is notable: Layton has resisted (and possibly reversed?) a longstanding trend in general discussions of rock art to dwell on esoteric and sacred aspects of the art. This volume shows that discussion of rock art need not hinge – or impinge – on the secret/sacred in order to be interesting.

The author is well aware of the political dimensions of academic research into any aspect of Aboriginal culture. One issue which recurs throughout the text is the responsibility of academics to promote public understanding of rock art and Aboriginal cultures and thus encourage responsible behaviour and attitudes within the wider community.

The final chapter of the book deals with the Aboriginal and non-Aboriginal adaptation of Australia, with particular reference to the use of rock art sites. The author draws a distinction between graffiti which he associates with a casual disregard for the value of indigenous rock art and deliberate vandalism which consciously seeks to appropriate or even obliterate indigenous heritage. The comments on rock art vandalism are perceptive:

There is a grim form of logic in the denial of Indigenous rights through the destruction of artefacts that may have been constructed to proclaim people’s attachment to the land, actions which are a reminder that the integrity of Indigenous traditions, and the right of self-determination are still under attack, two centuries after the European colonisation of Australia began (p.247).

As the title asserts, this book is basically a synthesis of the research which has been conducted into Australian rock art. It is also grounded, however, in Layton’s own extensive fieldwork with various Aboriginal communities within Australia. The text is spiced with anecdotes about Aboriginal relationships to land, including rock art, and with direct quotations or stories from Aboriginal people. This technique works well to situate rock art within its cultural context.

Australian Rock Art is suited to both an academic and a lay audience as the subject matter is of inherent interest to a wide range of people. This book provides a comprehensive overview of both the anthropological and archaeological literature on rock art and it is an excellent resource book for academics. The clarity of expression and simplicity of structure make it especially suitable for students.

The table of contents and index are detailed and easy to use. Basic technical terms are explained clearly either in the text itself or in a glossary. Lists of illustrations and tables, notes, appendices and references are also included. All plates and graphic reproductions are monochrome. Most figures are clear and the maps are well drawn and useful. There is one very public production error – a photograph by Darrell Lewis of a well- known rock art scene at Mount Brockman in which a hunter is apparently spearing an emu has been printed upside down (p.14). Since this same scene, photographed by George Chaloupka, has been widely distributed as a poster this error is unlikely to go unnoticed.

Australian Rock Art provides a comprehensive survey of Australian rock art and presents detailed anthropological and archaeological case studies which show how rock art functions, or may have functioned in the past, in Aboriginal societies. The pervasive theme of the book is the value of Aboriginal knowledge to an understanding of rock art. This volume is a significant contribution to Australian rock art studies. At $49.95, it is most likely to appear on the text and reference lists of Australian anthropological and archaeological courses.

Smith, C.
Review of 'Australian Rock Art: A New Synthesis’ by Robert Layton
June 1993
36
72–73
Book Reviews
You must be a member to download the attachment ( Login / Sign up )