Review of ‘Archaeologies of Mobility and Movement’ edited by Mary C. Beaudry and Travis G. Parno 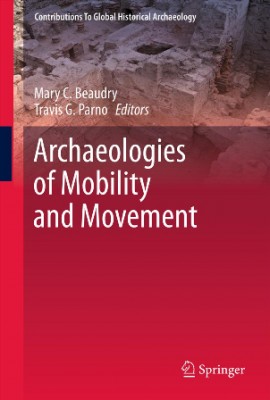 I should start this review by first acknowledging that my approach to archaeology is very much spatial. My analytical and interpretive tool of preference is geographical information systems (GIS), typically in the form of complex spatial models and cognitive landscapes. Therefore, my understanding of mobility and movement is usually expressed within actual physical, modelled or even conceptual environments, with an emphasis on interpretation in a mapped visual form. This volume edited by Mary C. Beaudry and Travis G. Parno takes an explicitly non-spatial approach to mobility and movement, which seems on the face of it, to be a contradiction. But perhaps there is more to the story.

My immediate thoughts on first reading through each of the chapters was to think of ways in which the analysis being presented could be visualised within an interpretive, yet immersive, spatial environment. There are clearly ways in which this could be achieved for each of the subjects involved—some chapters more easily than others. I thought each of the authors could benefit from taking their analysis to the next step, so to speak, and generate some interesting visualisations for exactly the kinds of interpretations they were making. Specifically, introducing network analysis and an immersive understanding of dynamical attractors would be appropriate for several of them; however, this was me naturally placing other people’s research within the narrow confines of my own understanding. I think we all do that, and in such a way that we reactively imagine that we could improve upon it, or might take a different approach. My instinct then was to place these interpretations in a different framework—one where spatial depictions are much more prominent.

But is that necessarily the most appropriate means of making the salient points? As I delved further into each of the contributions it became clear that there is an emphasis on the psycho-social elements related to mobility and movement, not the act/action of moving itself, which perhaps opens up an entirely different window on the subject. By taking the focus away from the act of moving (and its spatial depiction), each analysis is able to examine and interpret the psychological importance of distance, displacement and social identity. For that contribution especially, this volume is both stimulating and noteworthy. I certainly do not believe that it is somehow limiting to present idiosyncratic, or one-off, cognitive spatial dynamics in a mapped depiction (I have done that very thing on several occasions—maybe not always successfully). But it is true that we tend to interpret visual displays of cognitive spatial dynamics (even idiosyncratic ones) as normative generalisations or group actions, not the contextual expression of individuals. Although interpretations of agency and the individual can be portrayed spatially, they do come off as simplifications of complex social or cognitive issues. This is very much the case when one considers the concepts of nostalgia, longing, loss, disconnection and powerlessness that are among the primary foci of this volume of papers. Despite the adage that a picture is worth a thousand words, it is still very difficult to get a map (or series of them) to represent some of these very complex ideas. So perhaps my knee-jerk reaction to want more visual analysis was both unwarranted and short-sighted.

In a chapter by chapter review, rather than summarising the entirety of each paper (which is admirably done in Chapter 1 by the Editors, Beaudry and Parno), and providing my own judgment on its success, I would like to emphasise one or more concepts that I felt were particularly interesting from each, and which stimulated thoughts on how I might incorporate such ideas into my own research.

In Chapter 2, Visa Immonen introduces the idea of desire for connection to a distanced, or lost, identity for members of a social or cultural diaspora as represented by certain material objects. These objects at home have little of the same power to represent an ethnic or group identity. This is contrasted with the shifting social and currency value of these items within the Indigenous community at the time. The chapter is an excellent example of how the meaning, and power, of objects may vary dramatically with respect to their context and distance.

Scott Joseph Allen, in Chapter 3, provides an analysis of the difficulty of interpreting the complexity and diversity of material culture and its social meaning. Rather than an absolutist approach to defining the ‘ethnicity’ of artefacts, we need to consider the context of their manufacture, use and discard, to understand the fuzzy interface between cultures during the process of contact and colonisation.

Chapter 4, by Oscar Aldred, uses a fairly recent (mid-nineteenth to early twentieth century) case study to illustrate connectedness, organisation, expressions of ownership and the movement of both people and commercial property as an operational mechanism. This chapter is one of the most spatially explicit in its approach, though it is clear that the interpretation is meant to be viewed from the perspective of flexibility and the dynamic adaptability of Icelandic sheep farmers.

In Chapter 5, Ronald Salzer builds inferences from the remains of a specific scientific instrument, and its context, to understand the larger concepts and importance of both measuring time and the travel to, and interaction with, distant places. The results not only have meaning for the movement of people and goods for commercial or political purposes, but also for the increasing materiality of the landed gentry and their place within the evolution of science and the Enlightenment.

Chieh-fu Jeff Cheng and Ellen Hsieh tackle a series of interesting topics in Chapter 6. These include the concept of political displacement, the eventual loss of identity, the manifestation of its memory and implementation of new ways to preserve or interpret its remnants. As a much more recent application of archaeology to the highly urbanised environment of modern Taiwan, it specifically takes the perspective that there are several approaches to preserving the memory, or social life, of lost communities.

Chapter 7, by Mats Burström, looks at a specific activity, or the actions of individuals, that occurred in the face of war-time displacement. Over time, and with disconnection, the burial of objects to protect them for later use transformed from a practical opportunity, to one where the items held mostly nostalgic associations. In a sense, this is a reiteration of the notion presented in Chapter 2 that the power and social meaning of objects changes with context and distance. But in this case, the objects themselves never moved. Instead, it was the memories attached to those objects that were carried by the original owners and that changed over time.

Craig N. Cipolla, in Chapter 8, approaches the concept of ethnogenesis by examining the breakdown of traditional communities and their movement to new locales. This is followed by the realignment of ethnic identities, the creation of new communities and the development of novel behavioural and material practices. As someone who has specifically worked in the area of North American Contact Period migrations and native community dissolution, this chapter was quite enlightening as to the process of ‘becoming’ for the Brothertown Indians, and especially their spatial expression of it. Like Chapter 4, this paper was somewhat more spatially oriented than most of the other chapters.

In Chapter 9, Sean Winter addresses the issues of scale in the archaeological interpretation of, and the contrast between, global and local expressions of confinement; and more specifically the system of, and motivations for, convict transportation. This also includes the management of a removed population, and within the context of British colonial objectives. Of prime importance in this chapter, and an important lesson for the reader to take away, is that we, as archaeologists, are sometimes not aware of the ways in which both sites and material objects may differ quite distinctly in their meaning or significance with regard to their local versus regional or global contexts. Importantly, those scales of reference can change dramatically even over short time periods or distances.

Chapter 10, by Karen A. Hutchins, addresses the action of creating cultural marginality or the movement of people to the edges of their community. This creates a disconnected identity for those people, whatever their reason for liminality from the original group. Hutchins examines this life at the edges, and highlights an archaeological case study where the marginalised were forced to define a new identity which they could embrace. This chapter is a strong reminder that we should not paint archaeological pictures that always treat communities as monolithic or necessarily uniform.

Magdalena Naum undertakes to examine homesickness in Chapter 11. This is a more explicit analysis of the concept of nostalgia that was already highlighted or touched upon in several of the other chapters. By addressing the nostalgic value of specific personal items, she illustrates how material objects often have more than a functional or monetary value, and once again, how the power of nostalgia can be amplified both by distance and the specific context within which it operates.

In Chapter 12, authors John F. Cherry, Krysta Ryzewski and Luke J. Pecoraro provide a fascinating discussion of AIR Studios, Montserrat, as a node of movement for the modern day music industry. Whereas the previous chapters in this volume focus on the movements of objects or people from one place to another, this and the following chapters,look at the location itself as a conduit through which the movements of both people and objects took place. Naturally, the emphasis in this chapter is eventually placed upon the significance of the site as a means to evoke a sense of ‘sacredness’ and nostalgia through a cultural association with the music that was created there.

Chapter 13, by Travis G. Parno, presents several case studies looking at how modern day visitors move through, and experience, historical house museums. Using both surveys and demographic data, Parno contrasts the authenticity of historical reconstruction with the visitor’s perception of it. This provides an interesting discussion on the nature of historical narratives and the development of interpretive plans. This is another reminder that perception and reality may be very different, for people today as well as in the past.

Christina J. Hodge, in Chapter 14, looks at interaction and daily activities within the setting of the Harvard Indian College. Structured movement according to schedule and agenda was a means by which external control was manifest. Hodge goes on to place the college in the cultural landscape of the time as an example of an ‘individually and collectively created’ place situated within the larger context of Harvard Yard.

In Chapter 15, Alexander Keim addresses the urban landscape and the movement of individuals through it as an example of practice theory. By looking specifically at personal adornment and presentation, Keim suggests that dandies in nineteenth century Boston were engaged in ‘practice’ by not just their exaggerated adornments, but also the ways in which they moved through the urban landscape. This effort to be seen and to express a specific identity can be linked to the material objects they left behind; providing a more complete understanding, and interpretation, of particularly commercial goods in archaeological settings.

The afterword (Chapter 16) by Shannon Lee Dawdy, although short, is an excellent summary of the major trajectories of the papers in this volume. It was, in fact, upon reading this chapter for the first time that I began to recognise the overall impact that these contributions could make to my own understanding of mobility and movement. When you can say that a thematic collection of research papers has made you think about something you deal with every day in new and interesting ways, then you would have to conclude it is a very worthwhile read.

Thomas G. Whitley
Review of 'Archaeologies of Mobility and Movement' edited by Mary C. Beaudry and Travis G. Parno
Dec 2013
77
152-153
Book Reviews
Download
You must be a member to download the attachment ( Login / Sign up )