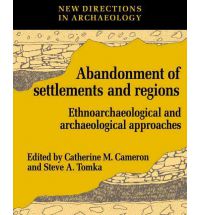 There were many times when I tried to abandon this volume, yet with the knowledge that it was probably good for me (a bit like the cod-liver oil we all grew up with) I persevered to the end. My relationship with the book, therefore, became a metaphor for the variety of processes which occur when people abandon settlements, structures and activity areas. I am glad that I took this medicine, however, as in reflection I feel this book represents one of the more important contributions to site formation studies over the last decade. Indeed this is the first collection of papers to critically examine abandonment as a stage in the formation of archaeological sites. Ethnoarchaeological and archaeological data are used to examine complex abandonment processes at both the regional and site-specific level with examples drawn from the Americas, Europe, Africa and the Near East. The papers were originally prepared for two symposia at the 1990 Society of American Archaeology meetings.

The themes of the volume are introduced by Cameron in Part 1. She stresses that while it is important to define the causes of abandonment, the real challenge lies in characterising the relationships between human behaviour at the time of abandonment and the material patterns produced in the archaeological record. Abandonment processes may include curation and caching of tools, changes in disposal patterns and the dismantling of structures. As she notes ‘Abandonment processes condition the entry of cultural material into the archaeological record’ (p.4). Factors such as speed, forward planning and anticipation of return determine the type of abandonment processes that will occur. Such a focus inevitably takes us away from catastrophist models of regional and site abandonment.

Part 2 deals with ethnoarchaeological cases for regional abandonment. In his study of agro-pastoral transhumance in southwestern Bolivia, Tomka argues that anticipation of return significantly affects abandonment behaviour between pastoral and main residences. Within a highly logistically organised system delayed curation is an important process affecting the composition of cached artefact assemblages. This is especially so when abandonment is a continuous process in the seasonal agro-pastoral round. The major implication for archaeologists in this study is that artefacts diagnostic of site function and use are removed from abandoned residences unless they have low replacement costs.

Punctuated abandonment is examined by Graham in her study of Raramuri agro-pastoralists of the Sierra Madres, Mexico. This concept expresses the planned departure and reoccupation of residences in the normal settlement-subsistence system. Graham’s study raises the issue of whether it is possible to distinguish between assemblage variability caused by mobility strategies or other aspects of cultural organisation such as what groups decide should comprise the abandonment assemblage (e.g. site furniture, personal and other gear). Archaeologists are asked to consider whether a site has been produced in the context of punctuated or permanent abandonment. The material assemblages, on Graham’s modelling, will be very different.

A paper by Home, based on research in Iran, asks us to view settlement instability in arid land settlement as a positive means by which groups adjust to unstable social and physical environments. In examining another arid area, the Kutse region of the Kalahari desert, Kent argues that mobility strategies influence abandonment processes in two ways. Groups planning a short stay at a camp will possess a smaller implement repertoire and will invest less energy in site construction and maintenance than those planning a longer stay. As she notes ‘Both of these factors will influence archaeological visibility and interpretations of abandonment behaviour’ (p.55).

The final paper in Part 2 examines a particular kind of abandonment referred to as ‘agricultural abandonment’ where sites are vacated due to declining agricultural yield given a concomitant lack of intensification. Two distinct modes of adaptation are defined drawn from divergent case studies of, on the one hand, intensifiers (Germanic types and Kofyar) and extensifiers (the Finns and the Tiv).

Part 3 deals with archaeological cases of regional abandonment. One of the most significant papers in the collection appears here with an examination of abandonment theories for the North American Southwest. The authors alter their scale of analysis from single ‘Great Abandonment’ and ‘Great Drought’ theories to those which account for episodic abandonments due to periodic droughts, down to the fine-grained analysis of occupational histories of individual dwellings. They provide good empirical data to support the suggestion that abandonments were tied closely to high-frequency variation in precipitation and maize harvests. Subsequent papers in this section deal with regional abandonment as a product of aggregation, social fragmentation or fission with examples drawn £tom the Hohokam Classic Period of the Tuscon Basin and the Copper Age of west-central Portugal.

Part 4 presents ethnoarchaeological cases for abandonment within sites. Central themes include the process of re- use of abandoned residences in different modes (Zuni villages) and the different effects of gradual abandonment on specialised residences versus simple residences (La Concha, Mexico).

In Part 5 there are three papers dealing with archaeological cases for abandonment within sites. Two of the papers revisit the issue of pueblo abandonment by critically reworking ceramic abandonment measures and by using discard assemblages as a way of estimating the systemic inventory. The third paper describes abandonment of households amongst sedentary Plains societies. A useful model is presented (p.178) illustrating the relationships of abandonment functions and processes. Abandonment processes are classified as episodic, seasonal or permanent. They can also operate at the settlement, aggregate or individual household level. Finally, abandonment can be either planned or unplanned. The data from various Plains societies demonstrate that the activities of house use, maintenance and abandonment largely influence the spatial patterns of materials on the floors of dwellings. The research concludes that unplanned abandonment will result in better visibility of normal household activities.

In the final paper of this volume, Tomka and Stevenson argue that with the move away from catastrophist explanations we can explore the concept that abandonments are ‘cultural adaptive responses to sociocultural, technological and environmental circumstances’ (p. 192). Scale of analysis will largely determine which factors are dominant.

They make the point that often what is interpreted as site structure or the social or economic behaviour of the occupants during residency may be more the result of activities associated with the abandonment phases of occupation. This is especially the case if we are dealing with gradual and planned abandonment. This is an important cautionary tale for archaeologists, although not a new one.

We now arrive at the fundamental limitation of these abandonment studies. The authors note: ‘Archaeologists should be concerned not so much with abandonment processes per se, but with what percentage of the behaviours associated with site abandonment contribute to the composition and relationships between material remains at specific locations’ (p.193).

While I do not dispute the need to arrive at a ‘percentage contribution’ I would ask simply, how? To quantify and calibrate such complex site formation processes in relationship to a taphonomically dynamic archaeological record is a tall order indeed. While some of these papers make progress in this area, I suspect it will only be certain categories of sites which will lend themselves to this type of deconstruction.

Overall, this volume is valuable because it provides copious empirical data and discussions on the nature, processes and activities of abandonment; an under-researched area in site formation studies. While the volume is well organised and crisply presented, I often found the style of expression dense, jargon-rich and therefore somewhat alienating. None of my criticisms, however, should be seen to undermine the theoretical contribution of the volume.

Veth, P.
Review of 'Abandonments of settlements and regions: Ethnoarchaeological and archaeological approaches’ edited by C.M. Cameron and S.A. Tomka
December 1996
43
56–58
Book Reviews
Download
You must be a member to download the attachment ( Login / Sign up )