Review of ‘A Fearsome Heritage: Diverse Legacies of the Cold War’ edited by John Schofield and Wayne Cocroft 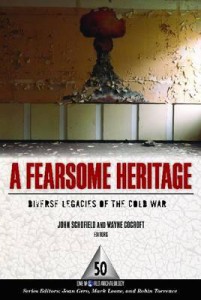 This edited volume aims to provide a critical assessment of the places, events and things that together constitute the contemporary archaeology of the Cold War. It is odd to be confronted with a book on the archaeology of a period of time that one has lived through. It is even odder to read in the introduction by the editors that ‘this is exclusively northern hemisphere heritage in a way’ (p.13) leaving us southerners to ponder the ways in which a global conflict would not leave a heritage for us in the south, especially in a nation which was so supportive of the USA notably through involvement in the Vietnam War. Actually we all know it did leave a legacy from Maralinga to contemporary popular culture, the Cold War runs through our history leaving, as the authors describe, a diverse range of material culture and cultural values towards studying the past. It’s just that the editors seem fixated in their own hemisphere.

The editors attempt to justify the inclusion of papers discussing film, video and music as part of the archaeological record of the period by claiming the full range of material expressions of the Cold War is archaeology. They rely on a rather inconclusive quotation from Lord Renfrew to support their argument. My view is that by drawing in such a wide-range of perspectives, the value of the understanding that archaeology provides is lost amongst all the videographers and museum curators. It is up to the reader’s taste to decide or even worry about whether this is an important issue or not.

It is also interesting that there is no mention of archaeology’s active role in the Cold War in supporting each side’s ideology and in some cases with archaeologists allegedly taking a more active role (in the tradition of Woolley and Lawrence). I would have thought in a volume aiming at a critical assessment this might have been the first port of call.

What this edited volume seeks to address is the documentation and deconstruction (something neither side achieved) of the diverse legacies of the Cold War and to explore the ownership and relevance of the past to a range of communities and interest groups. So if you are looking for an archaeological typology of atomic bombs it isn’t in this book. But if you are interested in a broader, more generalised view, of the Cold War, the 16 chapters and the introduction in this book provide much of interest.

Unfortunately some of the papers provide little of the critical assessment claimed by the editors. Vining’s paper on women’s uniforms is little more than description; Hacker’s ‘Reflections on nuclear submarines …’ (pp.273-284), describes the production of a museum exhibit rather than anything much to do with actual nuclear submarines. Beazley’s paper describes the politics surrounding the World Heritage listing of Hiroshima which seemed to me to be less about the Cold War and more about the legacy of World War II.

I am not sure how to review Kyriaakides paper describing two musical performances relating to the Cold War which are available on the web for our edification? As you would guess they are very modern – frankly Dylan and Hendrix, in my opinion, made much better contributions on the topic (because they had a greater sense of the times and could play a bit). How this is in any way archaeology beats me. Similarly the chapter on ‘Filming the End of the Cold War’ by Steingrover and that on the silence of the photograph by Watson are interesting, but they merely discuss the production of the works rather anything archaeological or much in-depth on the Cold War.

There are two papers which in effect describe video and photographic recording of RAF Spadeadam and a Russian base in Germany, Forst Zinna. These are interesting but really not substantive insights largely because they are not detailed enough and are strangely insufficiently contextualised.

There is more of interest in the papers on military bases (Cocroft), the Cold War reflected through domesticity (Buchli) and on the various protest camps: Greenham Common (Fiorato) and the Nevada Peace Camp (Beck, Drollinger and Schofield). In these papers the authors engage with both Cold war ideology and its opposition and material culture to reach a point where the archaeological remains on the sites can at least begin to be interpreted. I found these papers the most satisfying in the volume.

The Australian contribution is as one might expect by Gorman on outer space and by Smith discussing the US and French atomic bomb tests in the Pacific.

Overall, I found this book did not live up to its claim of providing a critical assessment, deconstruction or of being in some way archaeology. Too many papers were papers about doing other things such as writing a broad scale study or making a video and not enough about the Cold War. Those that are more substantive at least provide a beginning to the beginning of a study that no doubt will continue over the next century. Perhaps the books should have been described as a series of heritage studies rather than archaeology as the papers fit better into that semi-literate genre. Nevertheless the archaeology of the Cold War has to start somewhere and this volume does pose some interesting challenges for archaeology. It is cautiously recommended.

Iain Stuart
Review of ‘A Fearsome Heritage: Diverse Legacies of the Cold War’ edited by John Schofield and Wayne Cocroft
June 2009
68
76-77
Book Reviews
You must be a member to download the attachment ( Login / Sign up )