Review of ‘A Companion to Archaeology’ edited by John Bintliff 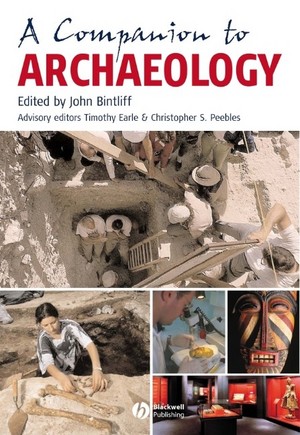 Numerous books on archaeological theory and practice have appeared over the last few years, many at the forefront of current archaeological thought. In A Companion to Archaeology, the editor John Bintliff set about to compile a different kind of archaeology book on this general topic, one that aimed to showcase the broad scope of archaeology in 27 chapters, each and together allowing the reader to ‘touch the pulse of archaeological approaches to the past’ (p.xviii). What sets this book apart from other books of similar scope, we are told, is the explicit directive to each author to ‘talk about their field with enthusiasm and personal commitment’ (p.xvii). This was to be a set of personal perspectives on recent and promising approaches to the past – the ideas and practices that today give archaeology its cutting edge.

Many edited books of this kind contain one or two great and inspirational chapters, a few that don’t quite fit the bill and many acceptable, but not particularly memorable ones. This book is notable for the high quality of the majority of its chapters and indeed none are ‘bad’ – which does not, of course, mean that we have to agree with the position or conclusions reached by each or any author.

To its credit, this book contains very many statements that are cause for major debate with respect to archaeological practice. For instance, much world archaeology has long revolved around the identification of archaeological ‘cultures’ which form the intellectual and unitary foundation for the exploration of regional histories. Culture history approaches in archaeology have been the subject of much debate over the last 30 to 40 years, but remain an intellectual straightjacket in many (most) parts of the world. To its advantage, Australian archaeology, perhaps because of its relative youth, managed to knock such approaches on the head at a very early stage (thanks largely to Mulvaney), and modern, professional archaeology in this country has largely eschewed the concept, but it remains prevalent in much archaeology elsewhere. Here Shennan (p.6) thus begins with an archaeological definition of ‘culture’, followed by its contrast with ‘culture’ as anthropologically understood and the realisation that the twain should not meet. Why not do away entirely with notions of ‘archaeological cultures’ (by this I do not mean the culture of archaeological practice), and stick with social anthropological notions of the term that can then more fruitfully be applied to archaeological interpretation?

Many other important issues are raised by other authors in this volume: Fletcher points out that not all knowledge is held by oral traditions, nor are we reflexively aware of all the things that happen to us; some kinds of historical knowledge need to be discovered through various forms of scientific research. We must thus not only ask how individuals and groups intentionally direct personal and social behaviour, but also how the world around us affects behaviour subliminally; such subliminal forces silently expose the inadequacies of agency-thinking. Hence Bintliff (p.174) questions whether it is appropriate ‘to envisage the forms of society as the ‘accomplished outcome’ and ‘skilled performance’ of human agency?’ If ‘agency’ concerns the power to act through decisions made consciously and self-reflectively (i.e. if it concerns the self-reflective reasons for our actions prior to their event), then it does not sufficiently take account of the cultural pre-positionings of human life, of the power of being socially and culturally-positioned (but see Hassan p.323). In this sense Fletcher’s (p.115) assertion that ‘[p]eople create their social lives out of actions and verbal declarations’ may be partly true (see also Bintliff p.182), but in itself this does not sufficiently address the fact that people are also born into an already-meaningful world. History imposes precedents and frameworks (which can be, and are, continuously transcended, but such movement is always historically situated; cf. the ‘law of negation of negation’, which implies that understanding something always needs to be located in its historical emergence in sets of (dialectical) relations between interconnected things). In this sense a number of chapters in this book would have benefited from discussion of habitus and other sociological, anthropological and philosophical concepts (e.g. Fletcher’s chapter could have benefited from a Derridean discussion of meaning, language and material culture). On a different point of omission, it is curious that there is no mention of OSL dating in the chapter on ‘Archaeological dating’.

Gowlett (p.199) discusses the notion of ‘needless precision’ in archaeological practice (especially as it relates to dating). However, counter to his view on this subject, there is a danger of not going beyond ‘needed precision’: we need ‘needless precision’ so that we position ourselves to ascertain and access maximal archaeological precision (let us not forget that we usually only know what degree of precision we really need after analysis has been undertaken). For example, it may turn out that sediment mixing within a site does not allow us to interpret individual thin excavation units in any meaningful way. However, it is only by excavating a site in a way that is finer-grained than interpretation warrants that we will be able to investigate degrees of integrity, and that will enable us to take maximum advantage of a site’s interpretative potential. Furthermore, obtaining ‘needless precision’ will ensure that we don’t compound imprecision during analysis.

The above are only some of the many points worthy of debate broached by this book. In this sense it presents a most useful and at times inspirational text to the student and practitioner alike. However, one wonders why there are only two women among the 27 authors (one of which covers the chapter on ‘gender’) for such an important and broad-scoped book – certainly this is not due to a lack of potential candidates. Similarly, although there is a useful chapter on ‘archaeology and Indigenous peoples’, Indigenous perspectives on many issues that concern the archaeology of their pasts often fail to be discussed in the relevant sections (e.g. on p.444 why is there no mention of Indigenous concerns of who owns the past?). Nevertheless, in this context and contrary to common discussion in archaeology, Hassan (p.317) usefully reminds us that ‘landscape’ art is not just ‘Western’, nor does it simply date to the period after the 1500s.

Here we see again that ‘the Other’ emerges at the edges of (non-)representation (see also Bell, p.523). This problem of representation is further highlighted by a preoccupation with grand narratives and ‘global histories’ across much of this
book (e.g. see the chapter ‘Chronology and the human narrative’, amongst others). The significance of local history is not adequately addressed anywhere in this book: there appears to be a fairly general presumption here that grand narratives and understanding broad trends are more important than specific or local knowledge (see also p.393). Such approaches to history bring with them a tension: on the one hand, historical research is undertaken in specific places whose meaningfulness touches most immediately and significantly local communities, while on the other hand professional researchers typically work in those same places to generate more general statements or theories about geographically broader historical trends or processes. Such latter frameworks of research may not necessarily be and often are not of great interest to local communities. Rather, of greater concern or curiosity are usually issues to do with one’s own community history. The popular saying ‘think globally, act locally’ is in this context left wanting: here ‘global history’ does not simply take priority, for local histories, for their own sake, are often what is most meaningful for people trying to trace their own pasts. In this book, however, there is much preoccupation with broader-scaled narratives, and such scalar issues are nowhere addressed with these concerns in mind.

In the introductory chapter, the editor from the onset identifies the book’s editorial philosophy that all archaeological approaches are not equal, but that diversity is welcomed, different methodologies being ‘complementary rather than oppositional’ (although it is not evident that all authors or chapters agree with this stance). ‘Not only do we need such varied approaches to understand a multifaceted world’, but it is also the view of the editor (and therefore, paradoxically, a theme that guides the book as a unified whole) that different approaches ‘are not commensurable: a useful contribution in one methodology is best evaluated in terms of that method, not by the standards and doctrines of another’ (Bintliff, p.xviii). While this book cannot possibly address all approaches or all methodologies for investigating human history, selection has unavoidably taken place, as is the role of an editor and it remains true to this philosophy. Thus, in the face of recent criticisms that the discipline has in recent years lost its direction, this book offers a an alternative viewpoint: a recognition that the discipline is more exciting now than it has ever been, precisely because of this diversification of approaches, a willingness towards multivocality that opens up archaeology to the multifacetted dimensions of being, of the human past and its relevance to the present. Archaeology has lost its original innocence, but in its place comes new innocences that await exploration and experience and this book nicely positions us for these opportunities ahead. I can strongly recommend this volume to the professional and student alike, all for the better with the promise of raising much learned debate.