Review of ’23°S: Archaeology and Environmental History of the Southern Deserts’ edited by Mike Smith and Paul Hesse 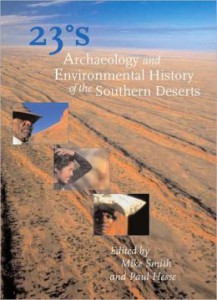 This book offers a collection of papers on the archaeology and environment of the arid lands of the southern hemisphere from a conference held in January 2003. The introduction provides an overview of the deserts and the main themes, the settlement of desert regions and the interplay between culture and climate. This and the following chapters in Part 1 ‘Environmental History’ review evidence for Quaternary climate change with emphasis on the period of human occupation. Comparisons are made between regions and continents allowing us to reflect on what makes Australia unique from a global perspective.

Part 2, ‘Dynamics of Settlement’, reviews the archaeology of what are now arid parts of the African, Australian and South American continents in that order. Chapters are organised chronologically from those with the longest to those with the shortest human history. The primary orientation of this section is ecological; climatic histories are presented alongside the archaeological evidence for the timing of colonisation and the impact of aridity during the Last Glacial Maximum.

Discussion of the Pleistocene mostly excludes South America, which was occupied relatively late. Nonetheless, some valuable insights emerge from the Atacama (the driest of deserts) in terms of integration of environmental and archaeological datasets. The short-term timescale and finer-grained interpretations parallel the Holocene in Australian archaeology, which are covered here in papers by Robins (eastern Lake Eyre Basin) and Veth (Western Desert/Pilbara).

Part 3, ‘Rock Art, Land and People’, shifts the focus from the ecological emphasis of previous chapters to the social and religious orientation of desert societies. The chapters in this section provide a select overview of the rock art of the southern deserts. South Africa is the most widely covered while Australia’s dry land art is limited to a single region. All chapters highlight changes through time and focus on ritual organisation as a major influence on rock art in desert regions. Despite the similarities in approach, the three continents appear to have very little in common stylistically.

Part 4, ‘Hunters and Herders’, deals with pastoral expansion and its interaction with existing hunter-gatherers. Case studies are presented from three continents. In each case, the emergence of pastoralism is seen as much as the result of historical circumstances as prevailing environmental conditions. The dry areas of the three continents each have different experiences of contact with neighbours and colonial histories that saw pastoralism develop into the dominant form of land use that it has become today.

Part 5, ‘Historical Perspectives’, opens with two papers which examine the desert as a narrative construct. The papers in this section are more philosophical and probing, focusing on the relationship between identity and landscape. Two case studies from Australia (MacFarlane and Kimber) and one from Chile (Jimenez) deal with understandings local people have of their own landscape, which the Chilean refer to as pampa and the Pintupi as ngurra.

Encountering arid landscapes for the first time, explorers and settlers viewed them as deserts, as lifeless and empty. Local people viewed their homelands in a very different manner. As Jimenez points out, for the local Chilean population, the concept of pampa as an empty dehumanised space remained entirely foreign to them.

While there are similarities between the histories of Indigenous desert peoples, there are also points of departure as we might expect in a book which takes such a broad geographical and chronological sweep. There is always the danger that a book which spans the whole human history of desert areas strung out across half the globe will unravel in an incoherent jumble of chapters, but the editors show a deft hand in making it all hang together.

23°S makes an excellent companion to another recently published book dealing with the archaeology of global desert environments (Veth et al. 2005). Collectively, the comparative perspective they provide makes for instructive reading which will have a major influence on the future direction of desert archaeological research in Australia and abroad. These two important recent additions to the literature will be welcomed not only by arid zone specialists, but also those with a wider interest in the archaeology of human-environment relations.

Peter Thorley
Review of ’23°S: Archaeology and Environmental History of the Southern Deserts’ edited by Mike Smith and Paul Hesse
June 2006
62
62
Book Reviews
You must be a member to download the attachment ( Login / Sign up )