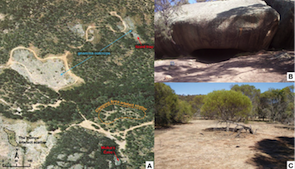 Mulka’s Cave is a decorated granite boulder in southwest Australia that has been the focus of archaeological interest for several decades. Following a test excavation, Bowdler et al. (1989) argued that initial occupation of the site occurred around 500 BP, though Gunn (2006) suggested that the visible rock art was created much earlier, from 3000–2000 BP. Re-excavation of Mulka’s Cave was not feasible owing to extensive erosion having destroyed the deposit; however, material excavated by Bowdler et al. (1989) was available for additional analysis, including further radiocarbon dating. The nearby Camping Area artefact concentration was also excavated and dated. The new series of radiocarbon dates demonstrate that the cave was visited by 8000 cal. BP and the Camping Area before 6000 cal. BP. Occupation of Mulka’s Cave therefore pre-dates not only previously suggested dates, but also those available for all other southwest rock art sites. Rates of artefact discard and sedimentation suggest that early occupation was comparatively sporadic, especially inside the cave, but that utilisation of the cave and surrounds may have intensified markedly in the last 1500 years.

Rossi, A.M.
Re-evaluating the antiquity of Aboriginal occupation at Mulka’s Cave, southwest Australia
June 2014
78
x–x
Short Report
You must be a member to download the attachment ( Login / Sign up )