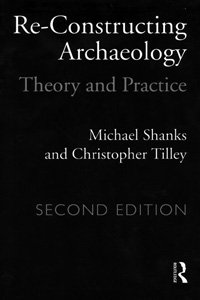 Re-Constructing Archaeology is divided into four parts and nine chapters, each of which addresses a particular (but related) aspect of this issue. Chapters1 (The present past), 2 (Positivism and the ‘New Archaeology’), 3 (Facts and values in archaeology) and 4 (Presenting the past: Towards a redemptive aesthetic for the museum) constitute Part 1 (Issues in Archaeological Theory and Practice: Critique and Development). Part 2 (Perspectives for a Social Archaeology) is made up of Chapters 5 (Hermeneutics, dialectics and archaeology) and 6 (Social archaeology: The object of study). Part 3 (Material Culture and Social Practices) consists of Chapters 7 (Style and ideology) and 8 (Social values, social constraints and material culture: The design of contemporary beer cans). Part 4 (Conclusions) consists of Chapter 9 (Archaeological theory and practice today). In addition, there are also a new preface and an appendix, where the authors attempt to address some of the criticisms that were made of the first edition of this book.

The presentation of the past, in texts, museums and so forth, ‘is part of the process of history’ (p.6). As such, and because archaeology is about perceiving a past that is no more, archaeology is by definition more than an objective thing. It is an objective practice. The concept of practice is itself imbued with subjectivity, with humans acting in a more than mechanical way. In this sense, it is distinct from abstract behaviour (which archaeologists like to talk about). In other words, we should go beyond an archaeology that claims to be objective; no positivist archaeology will do justice to the human experiences that make archaeology possible in the first place. It is thus not adequate to claim that archaeology is based on objectivity. As Sartre (1962) argues, objectivity is no more than an externalisation of subjectivity, and subjectivity an internalisation of objectivity. Archaeology as narrative is thus about re-creating a past via current social and political experiences. ‘History has no end’ (p.19). It has to be continually created, re-created and negotiated. The socio-political and ontological contexts of creation, re-creation and negotiation will change the histories we construct. As Shanks and Tilley (p.20) suggest, ‘archaeology should be conceived as the process of the production of a textual heterogeneity which denies finality and closure’. It is not adequate, therefore, to assume that there is a ‘hard bedrock of facts and data’ (p.36) upon which our archaeological theories and interpretations can be tested. This assumption, they argue, is a shortcoming of the ‘New Archaeology’ as ‘there can be no objective testing without circularity’ (p.37) (as observation is dependent on theory, and theory on observation).

All in all, Shanks and Tilley’s arguments are generally convincing (although I would not say that they are all that new). Their arguments are worded in the framework of contemporary approaches to knowledge, using the logic and language of hermeneutics and dialectics, hegemony and neo- Marxism. In this context, many of the arguments they make, however, could be stripped of its jargon. Shanks and Tilley have obviously heard this point before, for they defend their use of complex language with statements such as ‘the demand to read “simple” rather than “complex” texts is merely a valorization of anti-intellectualism’ (p.262). I’m afraid I must disagree. I also find it surprising that they argue this point, for they themselves argue that archaeology, as a means of presenting the past, should involve a closer link between the ‘professional’ practitioner and members of the general public. Unfortunately, making the means of communication more complex will hardly achieve this end. ‘Complex’ language does not necessarily increase intellectual debate: it often merely stifles communication. There are, I would argue, two exceptions to this. Firstly, when the author wishes to transcend current ways of thinking, it may be necessary to use new words that are not already embedded with a network of unwanted, pre-existing meanings. And secondly, some words may be used as a shorthand for complex issues (this may be particularly relevant when trying to shorten a manuscript for publication). Furthermore, while I agree with the general thrust of Shanks and Tilley’s arguments, finding them both interesting ad powerful, I would not say that they need particularly ‘complex’ language to be expressed. On the contrary, there are many linking issues relevant to their major theme (that archaeology is a relation between the present and the past), each of which could easily be addressed using simple language. This shortcoming does not, however, detract from the arguments themselves.

Re-Constructing Archaeology concentrates on the way people view, package and present the past. These themes arc presented to us, firstly, via a series of theoretical discussions, and then by showing us that the theoretical issues discussed really are applicable to the material record. The latter is effected in a number of examples, two of which are m analysis of designs on British and Swedish beer cans; and an analysis of the distribution of pottery items near and in a prehistoric burial site in Sweden.

I found Shanks and Tilley’s study of beer can designs fascinating. They were also, I would add, successful in demonstrating that the material record is structured by power relations, and that this record is therefore testimony to human ‘political’ relations. I did not find, however, their analysis of the prehistoric pottery very satisfying at all. They undertook a rather standard structural analysis of the distribution of pottery designs around a burial site, and then proceeded to interpret the observed patterns in terms of pre-determined structural beliefs (mainly based on dualities). The approach presented here is, in effect, very much akin to Levi-Strauss’s structuralism. Some of the assumptions they make, I would argue, involve similar law-like generalisations to those looked for by Middle Range Theorists (heavily criticised in this book). For instance, they interpret the presence of ‘open’ designs (designs without formal boundaries) on pots as evidence for the existence of ‘open’ social relationships. This approach is in direct opposition to their claim that we should not look for absolutes of this kind in social behaviour (the project of Middle Range Research). And yet, this is exactly what they have done here: they assume a general ‘law’ that open designs qual open social systems. The problems in this analysis are compounded at almost every stage with unjustified assumptions. For instance, they argue that: ‘cereal impressions occur in relatively large quantities in the sherds of the pots deposited at the tombs despite the fact that these pots were not used in an everyday domestic context [assumption]. This suggests an intimate connection between grain and the pottery, and the vessels very possibly contained grain and other products. So, there appears to be an association made in the ritual stage [assumption] of the tomb entrance between human bones disarticulated and deposited inside, death, pottery and the ancestors in relation to life [assumptions], grain and fertility [assumption]’(p.169)

(Why these assumptions?) What about the possibility that people were simply camping outside the grave and tossing broken pots behind them? Why infer ‘ritual’ at all? How do we know that these pots were not used in an everyday domestic context? Why cannot we simply infer the opposite to Shanks and Tilley’s views: that the people who created the tomb and those who lived outside it did not have a strongly formalised differentiation of life and death, of life space and death space? That people were living adjacent to the tomb?

Why don’t the presence of cereal impressions on the pots situated on the periphery of the tomb imply that people used this area as domestic space, or that domestic items were used as burial items? The final conclusions reached by Shanks and Tilley (quoted above) are unwarranted given the nature of the evidence presented. I would argue, rather that we should not feel compelled to present constructions of the past that reach beyond the evidence at hand. If we wish to do this, then we should never lose track of the limitations of the evidence, and of the models that we wish to present. There are some things that we just cannot, unfortunately, talk about when it comes to the past (simply because the past is gone and therefore there are things that we will never know).

All in all, I enjoyed this book and would recommend it to all archaeologists. One reason is that it illustrates well some of the shortcomings of the ‘New Archaeology’ and ‘Middle Range Research’, with their focus an adaptation and hypotheticodeductivity (both of which involve unacknowledged circularities, and usually ignore the fact that archaeologists, as observers, participate in the re-construction of the past). Another reason is that the authors do not only criticise the way other people have done archaeology, but rather they give concrete examples of the way that they think it should be practiced (although in a way their arguing for their way is in contradiction to their argument for a pluralistic archaeology). I agree wholeheartedly with Shanks and Tilley’s overt political and social stance, that archaeology is politics. I also agree with ‘their’ general structural approach. I do not agree, however, with the freedom of interpretation they take in the Swedish burial example given above, and this may be because of the circularity of some of Shanks and Tilley’s arguments. In this case study, they began by assuming certain structural principles, interpreted the archaeological materials in terms of these structural principles, and therefore these principles became self-supporting in the process. Given their argument that archaeology is, by nature, a hegemonic practice, I guess that this case study befits the theme of this book. It does not, however, befit the strengths of the general arguments presented.

David, B.
Re-constructing archaeology: Theory and Practice’ by Michael Shanks and Christopher Tilley
June 1996
42
69–70
Book Reviews
Download
You must be a member to download the attachment ( Login / Sign up )