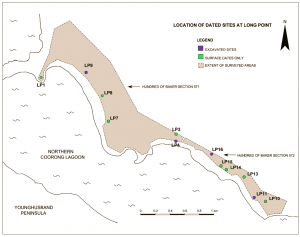 This paper presents 29 radiocarbon dates from eight surface concentrations of shell and 10 test-pits across four shell middens at Long Point in the Coorong, South Australia. Results indicate that occupation of these sites was confined to the late Holocene period, post-2500 cal. BP. With the exception of one midden, which appears not to have been used after 500–300 cal. BP, all other sites suggest continued use until the recent past. This pattern fits with a proposed period of population expansion and intensification of resource use inthe Coorong, along with more general changes known to have occurred in parts of coastal Australia during the mid- to late Holocene.