Pointless spinifex? An investigation of Indigenous use of spinifex throughout Australia 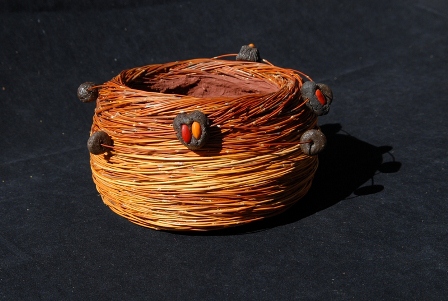 European settlement had substantive impacts on much of Indigenous Australia, resulting in the loss of knowledge about certain technologies and practices: this is especially true in relation to the use of plants. Despite its distribution across more than one-quarter of the Australian continent and its widespread use by Indigenous peoples, relatively little research has been undertaken on spinifex grasses and their associated technologies. While aware of the inherent limitations of ethnographic literature and museum-based collections, this thesis investigates Indigenous uses of spinifex, reaffirming some existing knowledge and bringing to light new information. Particular emphasis is given to lesser known uses of spinifex, focusing on building narratives based on ethnographic records including photographs and objects in the South Australian Museum and Melbourne Museum collections.

Traditionally the two dominant and most widely-known uses of spinifex were the production of resin, which was employed for hafting and repairing, and as cladding in shelter construction. This research reveals that spinifex resin was also used for ornament manufacture, ceremonial and sorcery objects, healing and possibly even in rock art production. Other uses of spinifex included fishing and trapping, fibre-work, medicinal purposes, as a food source, in games, fuel for fire and subsequently for hunting, light, heat and communication, minimising water loss in water carriers, wrapping objects and shoring wells. Prior to this research, these uses had received little, if any, attention in the published literature. Specifically, our understanding of material culture objects such as spinifex nets and resin figurines have greatly benefited from the study of these objects within museum collections. In conjunction, museum information has been improved by being added to and/or corrected by findings through this study.

Although time-consuming to collect and process, spinifex resin was widely used probably owing to its highly desirable properties. A number of common processing techniques were employed throughout Australia and, contrary to the majority of recorded accounts, several factors suggest that women played an important role in these processes. Resin obtained from ant nests rather than threshing the plants themselves does not appear to have been commonly used and is likely to be a method which developed after European settlement. The analysis of adhesive specimens held in museums has provided a framework for the visual non-invasive identification of spinifex resin.

This research has revealed substantive new information regarding Indigenous use of spinifex. Spinifex grasses were highly valued in Indigenous societies and as traditional Indigenous knowledge coupled with Western science of the broader Australian Research Council Spinifex Project demonstrates, spinifex has many potential applications worthy of future investigation.

Heidi Pitman
Pointless spinifex? An investigation of Indigenous use of spinifex throughout Australia
December 2011
73
87
Thesis Abstracts
You must be a member to download the attachment ( Login / Sign up )