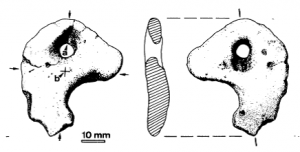 The pendant (published in Australian Archaeology 45:32).

One of the most unusual objects so far recovered in Australia’s Pleistocene archaeology is a perforated stone fragment excavated from the cave deposit of Devil’s Lair in 1973 (Dortch and Merrilees 1973). The marl object, thought to be between 12,000 and 19,000 years old, has been described as a possible pendant (Dortch 1979a, 1980). It is one of several unusual objects reported from this site that have been subjected to prolonged discussion and speculation. There are also several ‘plaques’ with engraved markings thought to be anthropic and some other perforated objects, including three ground bone beads (Dortch 1976, 1979b, 1984; Flood 1995:109–10). In response to critical review, identifications of several finds from the site were recently revised (Dortch and Dortch 1996: Table 1), and C.E. Dortch, the excavator, has arranged for the marked and some of the perforated objects to be subjected to specialist study (Dortch and Dortch 1996:30).

Bednarik, R.
Pleistocene stone pendant from Western Australia
December 1997
45
32–34
Article
You must be a member to download the attachment ( Login / Sign up )