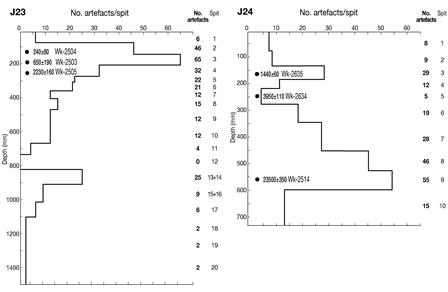 Two spatially close rockshelters at Mesa J in the Pilbara had relatively deep deposits and large numbers of stone artefacts distributed from top to bottom. The basal archaeological materials have been directly dated as (in the case of J24) or are inferred to be (in the case of J23) late Pleistocene in age. In J24 artefacts continued downwards throughout basal Spit 10, indicating that occupation of the rockshelter began before 27,657 cal BP, possibly thousands of years before. The distribution of stone artefacts and radiocarbon dates in J24 indicates that occupation of the rockshelter continued during the Last Glacial Maximum (LGM), providing further evidence that the Hamersley Plateau provided refuge for Aboriginal people during the cold and arid conditions of the LGM.