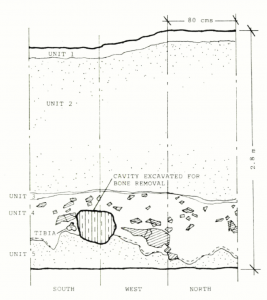 In September 1989 during archaeological test excavations in caves on King Island, Sim discovered a human skeleton. The remains, which are those of an Aboriginal, have been dated to approximately 14,000 years ago. This Pleistocene date for human presence on what is now King Island is significant for a variety of reasons. These human remains are of similar antiquity to both the Kow Swamp and Keilor remains and thus among Australia’s earliest. They date to the period of lower sea level when King Island was linked to both Tasmania and the Australian mainland, and thus provide the oldest evidence of the general morphology of the early Tasmanians.

Sim, R. and A. Thorne
Pleistocene human remains from King Island, southeastern Australia
December 1990
31
44–51
Article
You must be a member to download the attachment ( Login / Sign up )