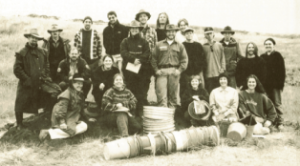 Marie Colvill in the front left of view (published in Australian Archaeology 46:39).

Marie Colvill died instantly in a road accident on Sunday December 7th near Tarnworth, New South Wales. She was returning to Canberra from the Australian Archaeological Association annual conference, which had been held at Boambee Bay Resort, Toormina, northern New South Wales. Marie had enjoyed the conference and many delegates will remember her vitality, enthusiasm and warmth during those three days. She had attended every conference of the association since 1995.

Marie made a decision to study archaeology in the Department of Archaeology and Anthropology in the Faculties at The Australian National University in the early 1990s. She had, during her earlier adult years, considerable experience in laboratory research from both America, where she worked in cancer research at the Massachusetts Institute of Technology and also from Italy, where she had worked in the Department of Genetics and Biophysics at the University of Naples.

Later she moved into photography, and was a member for 16 years of the Photographic Unit in the Faculty of Arts at The Australian National University, becoming the Head of the Unit from 1988–1992.

With the rapid administrative changes in that unit, she took a retirement package and decided to move on and to take a degree specialising in Archaeology. Her academic work was always careful, thorough and well prepared. During her years as a mature undergraduate she was always comfortable with younger students, showing remarkable adaptability, a thorough enjoyment of life and leadership potential. Never happy to sidestep issues, she often became the spokesperson for tutorial discussion and even-handed criticism in classes, bringing maturity, good humour and a sense of balance to many debates.

She was interested in, and knowledgable about, Australian botany and her Honours in Archaeology BA thesis, ‘Off the Shelf, Out of the Museum: The Retrieval of Plant Material from the Australian Archaeological Record’, was presented in 1995 (summary in AA45 December 1997:64). In it she reviewed the techniques for the study of archaeobotanical remains taking two case studies from previous excavations showing how worthwhile information could be extracted from the plant material. She discussed in particular the importance of Macrozamia species in Aboriginal subsistence, and presented a lively poster on this topic both at the Taphonomy Symposium, April 1995 (held in the Department of Archaeology and Anthropology, The Australian National University) and at the 1995 AAA conference at Gatton.

Marie was always one of the first people in the Department to volunteer assistance when required and set an enthusiastic example of successful team work. She was always at home in field situations and made an important contribution to excavations that she attended as an undergraduate, such as at Tambar Springs with Richard Wright in 1993. After graduation she entered the world of consultant archaeology and worked in late 1996 with Jeanette Hope at Lake Victoria, New South Wales, under the auspices of the Murray Darling Commission. During 1997 she worked as a research assistant for both Professor Matthew Spriggs and Dr Annie Clarke in the Department of Archaeology and Anthropology at The Australian National University.

In 1997 she lead the archaeological research in a multidisciplinary team working at Peery Lake. Whether in her role as one of the three undergraduate team coordinators in our Departmental undergraduate field school held at Kioloa, New South Wales in a wet July 1994, or as caterer and camp assistant to two of the three seasons of the field school held at Kiandra in the Snowy Mountains in 1996 and 1997, she showed the same sturdy combination of practical good sense and good humour supported by considerable culinary skills and an appreciation for the necessity of relaxation in these often tense and gruelling slices of archaeological life.

We frequently discussed our shifting roles within the family as parent/friend and she took a similar role amongst her younger fellow students wherever possible. Her skills as photographer, archaeologist, botanist, friend and adviser were in constant demand and her possessions, from space in her house to sharing supplies were always given with generosity and openness.

Marie enjoyed life even when she was short of money, feeling unwell or had a deadline hanging over her. Her cheerful enthusiasm infected and inspired many of her friends and colleagues and is missed in the archaeological laboratory, pub and tea room.