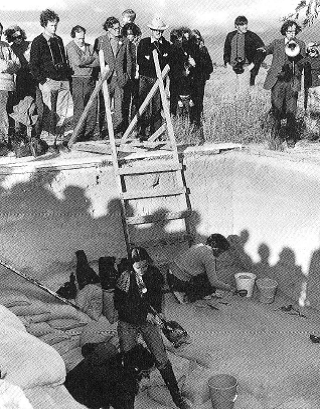 Graeme Pretty (with megaphone) at Roonka (published in Australian Archaeology 52:61).

Graeme Pretty was one of the principal figures associated with the development of professional archaeology in the state of South Australia. Graeme served in various curatorial capacities at the South Australian Museum, Adelaide from 1962–1994. These included Assistant Curator of Anthropology (1962–1965), Curator of Archaeology (1965–1973), Senior Curator, Human Science Collections (1973–1985) and Senior Curator of Archaeology (1985–1994). From 1994 until his death, he continued archaeological research as a Research Associate at the South Australian Museum and a Visiting Fellow in the Department of Anatomical Sciences, University of Adelaide.

Graeme completed a BA(Hons) majoring in History and Archaeology in 1960 and a postgraduate Diploma in Education in 1961. Both degrees were awarded by the University of Sydney. Early archaeological fieldwork (1960–1961) involved the mapping and excavation of Pleistocene limestone cave deposits in the coastal Nullarbor Plain region of southwestern South Australia. This research involved an investigation of the Koonalda Cave deposits under the supervision of Sandor (Alexander) Gallus (Gallus and Pretty 1967; Wright 1971).

From 1962–1965, Pretty trained as an Assistant Curator of Anthropology at the South Australian Museum under the supervision of Norman B. Tindale. During this period, he worked with archaeological and ethnographic collections from Australia, the Pacific, Africa and the Americas. In addition, he continued archaeological field training at a range of sites including Fromm’s Landing (Mulvaney et al. 1964) and Durras North Rockshelter (Lampert 1966) and conducted rescue excavations throughout South Australia and in Arnhem Land. Tindale’s close association with local South Australian Indigenous communities had a major impact on the archaeology practiced by Pretty. Graeme involved Aboriginal Elders and community members in all stages of research projects addressing past Indigenous cultures and lifeways.

As Curator of Archaeology at the South Australian Museum, Pretty visited museums in southeast Asia, the United Kingdom and Europe during 1966–1967 in order to become familiar with overseas collections, museum practice and research trends. In addition, he supervised the excavation of Anglo-Saxon town levels at Wallingford Castle, Berkshire, England (Pretty 1967) in association with Dr N. Thomas of the University of St Andrews.

Graeme had a passion for Melanesia, in particular Papua New Guinea. His key research interest was the transition of agriculture and evolution of cultural geography in Melanesia, whereby he studied the finds and uses of prehistoric stone mortars and pestles, found throughout the Highlands of PNG (Pretty 1971a). He served as a commissioner to review the function of the Papua New Guinea Museum and National Gallery in 1968, and during that visit he prepared a report and inventory of cave paintings and associated archaeological sites known to exist at that time. The same year he was a consultant for the Department of District Administration, Territory of Papua New Guinea, to review the Territory of PNG National Property Ordinance of 1965. In 1969 he led the first South Australian Museum collecting expedition to PNG, financed by a grant from the Wenner-Gren Foundation, and private funding (Pretty 1969). This was an ethnographic salvage program where over 1000 artefacts were collected from two regions in the Southern Highlands. This was the largest single collection at the time to be deposited at the PNG Museum. A similar expedition was carried out in 1970, with visits to the New Hebrides (Vanuatu), Solomon Islands and PNG.

Between 1969 and 1973 Graeme also served as Specialist Adviser in Ethnic Art of the Pacific Basin, Commonwealth Art Advisory Board, a Department of the Prime Minister and Cabinet (Pretty 1970a). In 1971 this work developed into an independent field collecting program based upon the dispatch of professional indigenous art researchers to key indigenous art provinces of the Pacific. Their primary goal was to work with surviving indigenous artists of ethnic authenticity in order to revive their work for the purpose of circulating specimens to cultural institutions in Australia and local Pacific Islands. Between 1971 and 1973, indigenous art tradition decline was arrested and reversed in at least five provinces of PNG and Island Melanesia.

One of Graeme’s most significant contributions to Australian Archaeology was his research at the Aboriginal site of Roonka on the lower Murray River of southeastern South Australia. His excavations at Roonka between 1968 and 1977 produced one of the largest well provenanced prehistoric Aboriginal skeletal populations in Australia (Pretty 1970b, 1971b, 1975a, 1977, 1986). The mortuary ‘ variability and elaborate grave goods observed at this huntergatherer site suggested the possibility of a non-egalitarian social organisation. During this time period, hunter-gatherer diversity and social complexity were a focus of archaeological and anthropological research (cf. Lee and DeVore 1968;  Struever 1968; Bettinger and King 1971; King 1976, 1978). Consequently, the Roonka site received a great deal of attention from archaeologists in Australia and abroad.

Graeme’s long-term dedication to an interdisciplinary and inclusive archaeology had a major impact on the development of the discipline in South Australia and abroad.

Boyd, W.E. and G.L. Pretty, 1989 Some prospects for archaeological palaeobotany in Australia: An example from South Australia. Australian Archaeology 28:40–52.

Campbell, A.H. and M. Prokopec 1984 Antiquity of tooth avulsion in Australia. The Artefact 8:3–9.

Pardoe, C. 1988 The cemetery as symbol. The distribution of Aboriginal burial grounds in southeastern Australia. Archaeology in Oceania 23:1–16.

Pate, F.D. and J.T. Hutton 1988 The use of soil chemistry data to address post-mortem diagenesis in bone mineral. Journal of Archaeological Science 15:729–739.

Pretty, G.L. 1967 Excavations at the Anglo-Saxon site of Wallingford, Berkshire, England. Journal of the Anthropological Society of South Australia 5(2):3–5.

Pretty, G.L. 1970a Report on the Commonwealth Collection of Primitive Art from New Guinea and the Pacific Islands. Canberra: Commonwealth Art Advisory Board.

Pretty, G.L. 1970b Excavation of an Aboriginal cemetery on Roonka Station, River Murray. Kalori, Journal of the Museums Association of Australia 38:17.

Pretty, G.L. 1975b The recovery of human remains for forensic purposes. Proceedings of the Australian Forensic Science Society 1(3):68–74.

Prokopec, M. 1979 Demographical and morphological aspects of the Roonka population. Archaeology and Physical Anthropology in Oceania 14:11–26.