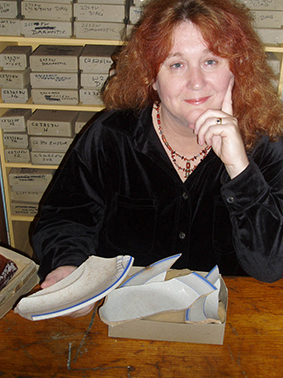 Dr Gaye Nayton suffered a suspected embolism and passed away in her sleep on 5 December 2013, aged 59. As a result, Australia lost a vocal champion of heritage, and our discipline lost a practitioner with an extensive knowledge of Western Australian historical archaeology.

Originally from the United Kingdom, Gaye arrived with her two daughters, Jennie and Kellie, in Western Australia (WA) in 1982, intending to make a new life for her family. Gaye had developed a passion for archaeology after a trip to Egypt as a teenager and, after settling in to her new home, commenced an Arts degree in the newly established Archaeology Department at The University of WA. She completed her undergraduate degree in 1989, writing her honours thesis on the wreck of the Sirius.

After graduating, Gaye set up her own archaeology consultancy in the early 1990s, specialising in historical archaeology. This was a significant event for historical archaeology in WA, as, for much of the time it was operating, Gaye’s company was the primary organisation working on historical archaeological sites in the state. Her company eventually completed over 200 heritage projects and, in her contribution to countless conservation plans, provided a basis for the protection and management of many heritage places. She worked on numerous significant sites, including Fremantle Prison, Government House, Mundaring Weir, the Moir Homestead, numerous convict and early settler sites, and in particular, Old Onslow, Broome and Cossack.

It was these three latter places on which Gaye focused her PhD, which was awarded in 2012. Her thesis examined market capitalism and its impact on shaping the development of WA during the 19th century. Based on her doctoral research she subsequently produced a book, The Archaeology of Market Capitalism: A Western Australian Perspective, which, to date, is the only published work that concentrates solely on the historical archaeology of WA. Gaye was in the final stages of writing a second book at the time of her death, which is to be published posthumously.

Gaye’s contribution to both academic and commercial archaeology in WA was significant. However, Gaye’s greatest contribution to the state’s heritage was her tireless public service in the promotion of archaeology and heritage advocacy. She was the State Coordinator for National Archaeology Week, the State Representative for the Australasian Society for Historical Archaeology and was intrinsically involved in grass roots education initiatives. She was also a regular and active participant at national and international conferences. She was a strong advocate for heritage matters, providing an expert perspective on endangered sites, especially Cossack, which was particularly dear to her heart.

After her death her family felt that her archaeological field equipment should be bequeathed to the UWA Archaeology Department, to be used in the training of up-and-coming student archaeologists. Her large library of books, reports and other material was also bequeathed to various libraries and historical societies. In particular, the various archaeological reports she produced have been included in the catalogue of the Battye Library, WA’s repository for historical documents.

Gaye was an integral part of our national archaeological community, a tireless promoter of heritage issues in WA and someone who regularly championed endangered archaeological sites and heritage places. Her contribution to the discipline was not through academic output—she did not write hundreds of papers and books, win major grants, or lead major projects. Instead, she worked at the grass roots level, quietly championing archaeology and heritage, working with countless children, and using her enthusiasm and humour to infect others with her passion. As such, her personal contribution was equally important, and she made a significant contribution to the discipline of Australian archaeology. She will be missed.