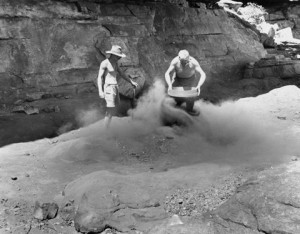 Fred McCarthy and Frank Setzler in Arnhem Land in 1948.

Fred McCarthy died at the great age of 92. His archaeological working career stretched over a period of almost 40 years beginning as Assistant Curator of Anthropology at the Australian Museum in 1932 and retiring in 1971 as Principal of the Australian Institute of Aboriginal Studies (as the Australian Institute of Aboriginal and Torres Strait Islander Studies was then known). His interest in archaeology obviously began before that time and extended long after his retirement.

McCarthy began working at the Australian Museum in 1920, but it was not until early 1932 that he was appointed as Assistant to W.W. Thorpe who was the Curator of Ethnology. McCarthy’s first Museum positions were in the Library and then the Department of Birds and Reptiles. He was still a Museum cadet in 1932 and from then until 1935 he undertook formal training in Anthropology under Professor A.P. Elkin at Sydney University. The thesis he completed for the Diploma in Anthropology, which he was awarded in 1935, was titled ‘The Material Culture of Eastern Australia, A Study of Factors entering into its Composition’.

A few months after McCarthy’s appointment as Assistant Curator, Thorpe died. McCarthy effectively took charge of the department from that time, but it was not until July 1941 that he was formally appointed Curator of the anthropological collections. He remained in this position for 32 years leaving only to take up the position as the foundation Principal of the newly established Institute in Canberra in 1964.

It was at the Australian Museum that McCarthy met his wife, Elsie Bramell. Bramell was appointed a few months after McCarthy, and they were the first University-trained anthropologists to be involved in managing the Australian Museum’s anthropological collections. Although she had to leave the Museum on their marriage in 1940 (in accordance with Public Service Board regulations), Elsie remained his life-long partner in his archaeological endeavours.

Early in his career McCarthy began primary research into the Aboriginal prehistory and archaeology of Australia, as well as recording and photographing ethnographic aspects of Aboriginal life. His work took place over a wide area of Australia (the New South Wales east coast [particularly around Sydney], western New South Wales, Arnhem Land, Cape York, and northwestern Australia). In studying the material culture and prehistory of the Aboriginal people, he excavated sites and recorded rock art, as well as classifying and studying archaeological and ethnographic objects.

From an early date McCarthy saw the importance of looking outside Australia and went to Singapore and Indonesia to visit museums and receive further training and field experience by visiting and working with other archaeologists. He was there from June 1936 to early 1938 (about 18 months), and attended the 1938 Third Congress of Prehistorians of the Far East (Singapore) where he presented a paper on the relationships of Indonesian and Australian stone implements (‘A comparison of the prehistory of Australia with that of Indo-China, the Malay Peninsula and the Netherlands East Indies’).

One of the most important expeditions McCarthy participated in whilst at the Museum was the American-Australian Scientific Expedition to Arnhem Land in 1948. McCarthy was invited by the Commonwealth Department of Information to join the expedition which was conducted by that department in association with the Smithsonian Institution and the National Geographic Society, under the leadership of C.P. Mountford. During this nine-month expedition McCarthy worked in association with Frank Setzler and Margaret McArthur on many aspects of Aboriginal life. His collaboration with Margaret McArthur on subsistence patterns in Arnhem Land resulted in their renowned study ‘The food quest and the time factor in Aboriginal economic life’, which was published in C.P. Mountford’s 1960 edited volumes Records of the American-Australian Scientific Expedition to Arnhem Land 1948 Vol. 2, Anthropology and Nutrition. McCarthy’s study of the bark paintings and associated stories that he collected during this expedition were published in Vol. 1, Art, Myth and Symbolism.

Amongst his most important archaeological excavations, were those undertaken at Lapstone in 1935–36 and Capertee from 1958 to 1961, sandstone rockshelters on either side of the Blue Mountains to the west of Sydney. The stratified stone artefact sequences at these sites formed the basis for the Eastern Regional Sequence, the three phases of which McCarthy called Eloueran (the most recent), Bondaian and Capertian (1948, The Lapstone Creek excavation: Two culture periods revealed in eastern NSW; 1964, The Archaeology of the Capertee Valley, New South Wales. Records of the Australian Museum 22 and 26, respectively). Although regional variants of the sequence and its chronology have been found, and researchers such as Megaw and Lampert proposed alternate names for the three phases, and others such as Mulvaney promoted two pan-continental phases (the Small Tool Tradition replacing the Bondaian and Eloueran, and the Core and Scraper Tradition equating to the Capertian or pre-Bondaian)—the existence of a tripartite sequence in south eastern New South Wales has stood the test of time.

McCarthy’s endeavours in recording and interpreting rock art produced a prolific number of publications in the 1950s and 1960s, particularly for the Sydney-Hawkesbury sandstone region, in Mankind and Records of the Australian Museum. McCarthy’s recordings (along with those of Campbell and Ian Sim) remain the only detailed documentation for many of these sites. His 1983 compilation Catalogue of Rock Engravings in the Sydney-Hawkesbury District NSW is an invaluable source of information about engraving sites in the Sydney region. Australian Aboriginal Rock Art, first published by the Australian Museum in 1958, and with its fourth edition in 1979, provided the public with information about the regional variations in both engraved and pigmented images on a continental scale. McCarthy also attempted to find temporal sequences in the rock art through the superimpositioning of pigmented figures in rockshelters equivalent to those established for stone artefacts—such a sequence for pigmented art still has to be found.

Between 1931 and 1988 McCarthy published over 300 articles, monographs and books which were written for the general public as well as for scientific audiences. These publications included The Stone Implements of Australia which he jointly published with Bramell and Noone in 1946. In this classic volume he attempted a systematic typological classification of Australian stone tools from all parts of the continent. This monograph was subsequently an important source-book for the more popular work Australian Aboriginal Stone Implements, which was first published in 1967. McCarthy, Bramell and Noone is now out of print, but the latter book has been reprinted several times and is still on sale. Though these works have their shortcomings, no equivalent books on Aboriginal stone artefacts have yet been published. His final work was a major undertaking – a manuscript titled Artists of the Sandstone, which contains a synthesis of the ethnohistoric records of Aboriginal life in the Sydney area at the time of first contact. These 900 typed pages and 70 pages of illustrations have been deposited with AIATSIS in Canberra.

During his life McCarthy devoted a tremendous amount of his energy and time to anthropological and archaeological concerns, and had a great influence on the disciplines of Aboriginal prehistory and Australian archaeology. Through our own research most archaeologists working in Australia are aware of the contribution McCarthy made to Australian archaeology and prehistory through publication of his site recordings and excavations, and his classification and analyses of stone artefacts and rock art. Perhaps less well known, but equally important (and acknowledged in recent ‘appreciations’ of McCarthy’s work published in Specht’s 1993 Commemorative Papers and in proceedings of the 1993 Australian Archaeological Association’s Darwin Conference) were the contributions McCarthy made to many other aspects of our discipline during his time both at the Australian Museum and the Institute. For example:

1. The management of ethnographic and archaeological collections held at the Australian Museum. The systematic management procedures that he and Elsie Bramell set in place in the cataloguing and storage of the collections and associated information at the Museum, provided a firm foundation for those that followed;

2. Organisation of Museum exhibitions on the life and archaeology of Aboriginal people as well as people from other countries. At the Museum, McCarthy was instrumental in changing the way the ethnographic displays were presented. The 1930s gallery treated artefacts as specimens using the systematic approach of natural historians. In contrast, although the 1956 Aboriginal Gallery’s panels and exhibits that were still fundamentally displays of specimens, material culture was used now to illustrate social, economic and religious aspects of Aboriginal culture, and its aim was to teach rather than entertain Museum visitors. This was the first time that aspects such as hunting and fishing methods, dress and ornament, magic and medicine, tribal distribution, trade, fire-making, methods of communication and spiritual beliefs had been shown in the Aboriginal Gallery.

3. As long ago as 1938 McCarthy began his long-term efforts to gain legislation to protect and preserve Aboriginal sites in New South Wales. In 1968, as Principal of the Institute he convened a national conference in Canberra on the nature and preservation of Aboriginal relics.

4. It was also long before the NPWS Aboriginal Sites Register was established, that McCarthy began to develop an index of New South Wales Aboriginal sites at the Museum, many of which he had found and recorded himself. Establishing and maintaining a catalogue of Aboriginal sites Australia-wide was another function that he introduced in the Institute.

Up until the 1960s, McCarthy was the only permanently employed professional anthropologist whose work related to Aboriginal archaeology and prehistory in New South Wales. The only other person in Australia employed in a similar position was Norman B. Tindale at the South Australian Museum. At this time there were also no academic courses in Australian archaeology or prehistory. For these reasons and because of his position at the Museum. McCarthy was called upon to give advice to many people and institutions. For example, he was a member of the Interim Council of the Australian Institute of Aboriginal Studies established by the Commonwealth Government, a member of the Historic Buildings Committee of the Cumberland County Council in Sydney (re Aboriginal relics); and he attended Council meetings of the National Trust of NSW as the Museum representative.

As Principal of the Institute, McCarthy set about addressing many of the concerns that he himself had faced in undertaking his research at the Museum, providing institutional support for research in the form of funding for fieldwork, artefact analysis and radiocarbon dates; avenues for publication; an annotated bibliography of published and unpublished documents (unsurpassed in Australia today), as well as promoting specialist meetings and conferences.

In recognition of his vast contribution to anthropological research in Australia he received an Honorary Doctorate of Sciences from the Australian National University in 1980, and was made a Fellow of the Australian Academy of the Humanities in 1990. In 1993 Records of the Australian Museum issued Supplement 17 devoted to papers by contemporary researchers which commemorated his achievements. In the same year, the Australian Archaeological Association’s conference in Darwin and its proceedings published in the following year were dedicated as a tribute to Fred McCarthy. Tributes well earned.

Attenbrow, V.
Obituary: Frederick David McCarthy
June 1998
46
40–42
Obituaries
You must be a member to download the attachment ( Login / Sign up )