Modernity and tradition: Considerations of Cornish ethnicity and its recognition in the archaeological record of a Burra dugout 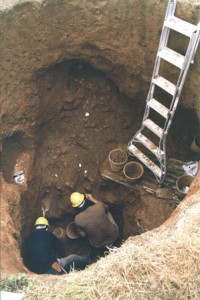 This paper presents the results of an analysis of a ceramic assemblage excavated from a nineteenth century dugout home in Burra, South Australia. It traces living standards around the world to establish that the dugouts were ordinary homes. The role of ceramics in class, status and ethnic identity in nineteenth century cultures is discussed. British regional cultures, including the Cornish, are explored, their differences from their English contemporaries are exposed, and a proposal is made to determine whether the inhabitants of this dugout were Cornish. Methods of excavation and artefact analysis are then described and results provided. The discussion considers the ceramics as both utilitarian and display items, and concludes that the preponderance of one class of food consumption item illustrates that the inhabitants were probably of British regional extraction.

Image caption: Site MF15 during excavation (published in Australian Archaeology 69:62).
Dean Mullen and Peter Birt
Modernity and tradition: Considerations of Cornish ethnicity and its recognition in the archaeological record of a Burra dugout
December 2009
69
59-67
Article
You must be a member to download the attachment ( Login / Sign up )