Midden variability in the coastal portion of the Kakadu region 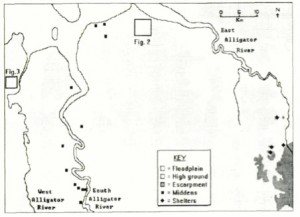 Shell middens in the Kakadu wetlands have not hitherto been described outside rockshelters. Along the eastern margins of the floodplains rockshelter sites such as Ngarradj Warde Djobkeng (Allen and Barton n.d.), Nawarnoyn, Paribari and Malangangem (Schrire 1982) have been well studied by archaeologists (Fig. 1). Throughout the vast wetlands to the north and west of these sites there are no comprehensive reports on middens. Woodroffe et al. (1988) have investigated the age and geomorphic context of middens along the South Alligator River, but there has been no detailed, quantified description of the archaeological components of those sites. Researchers from the Northern Territory University are currently undertaking an extensive survey of sites in the Kakadu wetlands and a picture of a rich and diverse archaeological record is emerging. This paper provides an initial record of the complex archaeological patterns on the wetlands by focusing on examples of dramatic inter-site variation in midden composition. The purpose of the paper is to document the diversity of middens which exist in the Kakadu region.

Hiscock, P. and F. Mowat
Midden variability in the coastal portion of the Kakadu region
December 1993
37
18–24
Article
You must be a member to download the attachment ( Login / Sign up )