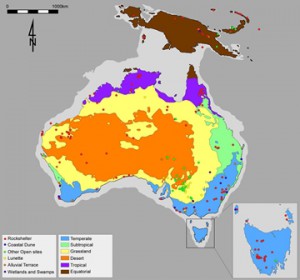 MPhil, School of Social Science, The University of Queensland, September 2009

In the past, the archaeological record of behavioural modernity in Sahul has been described as simple, sparse and essentially different from those records of Africa and Eurasia. These differences have been attributed to either low population densities during the Pleistocene or the loss of behavioural ‘traits’ on the journey from Africa to Sahul. While a number of studies have been undertaken, no sustained attempt has been made to investigate the role of taphonomy and sampling on the representation of behavioural modernity in the archaeological record, despite Sahul being characterised by extreme environments, highly variable climates, and archaeologically, usually only small excavations.

This study compiles a database of some 223 Pleistocene sites, including details of chronology, evidence for behavioural modernity and excavation details. Site spatial and temporal distribution, site characteristics, excavations, absolute dating, preservation and sample size are examined to determine how the behavioural complexity of a modern human population is characterised on this isolated southern continent and the impact of taphonomy and archaeological sampling on that representation.

Michelle C. Langley
Material culture and behaviour in Pleistocene Sahul: Examining the archaeological representation of Pleistocene behavioural modernity in Sahul
June 2010
70
82-83
Thesis Abstracts
You must be a member to download the attachment ( Login / Sign up )