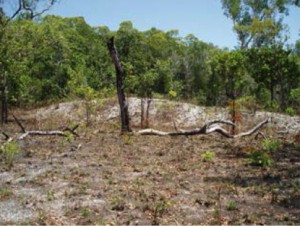 The abundant shell matrix sites around Albatross Bay near Weipa, western Cape York Peninsula, provide an important source of evidence for models of mid- to late Holocene Aboriginal subsistence strategies in the region. While there is considerable variation in the size and spatial distribution of these sites, their surficial species composition is almost invariably dominated by Anadara granosa (blood cockle). In this paper I describe a complex of shell matrix sites at Norman Creek, ~60 km south of Weipa, that do not conform to this trend. Like the Albatross Bay sites, they exhibit considerable variation in size, but their surficial species composition is dominated by Marcia hiantina (hiant Venus). This suggests that, in the past, shellfish foraging in the region was not exclusively focused on A. granosa. There are several factors that may influence variation in species composition, including shellfish ecology, economic and cultural values, and taphonomic processes. Further research, including detailed sub-surface investigation of shell matrix sites, is necessary to evaluate the role(s), and interplay, of these factors.