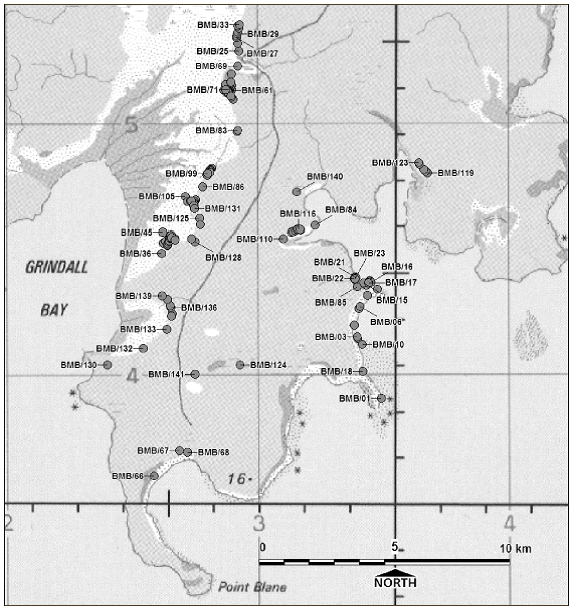 Distribution of sites in the study area (published in Australian Archaeology 59:26).

Twelve months of archaeological excavation and survey were conducted on the Blane Peninsula in Blue Mud Bay over three field seasons between 2000 and 2002. During this time, 141 sites were recorded, and 16 sites were excavated. Though archaeological work in the region prior to this study has not been extensive, some general patterns have been identified that are similar to those reported by other researchers across the tropical north of Australia. These patterns include the type of sites present, the use of similar resources; the distribution of sites across similar landscapes, and the timing and extent of occupation through the late Holocene. The preliminary analysis of the archaeological evidence demonstrates Aboriginal occupation and marine resource exploitation on the Blane Peninsula from 3000 years ago to the present day. This evidence includes relative continuity in the range of shellfish species gathered, in the site locations used during this time, and in the patterns of shellfish discarded in midden deposits.

Faulkner, P. and A. Clarke
Late Holocene occupation and coastal economy in Blue Mud Bay, northeast Arnhem Land: Preliminary archaeological findings
2004
59
23–30
Article
You must be a member to download the attachment ( Login / Sign up )