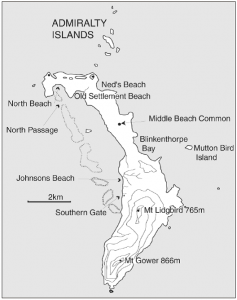 A survey of unconsolidated sediments overlying Pleistocene calcarenites and Tertiary basalts on Lord Howe Island was undertaken in 1996 in order to test the hypothesis that human settlement had not occurred before the European era, beginning in AD 1788. The results, largely from augering in lowland areas suitable for settlement, showed almost no sign of human occupation, and two radiocarbon dates on charcoal from sand-dune deposits are both modern. As the original argument stands, the remains of the AD 1834 colony may now be used in comparative analysis of initial island colonisation.

Anderson, A.
Investigating early settlement on Lord Howe Island
2003
57
98–102
Article
You must be a member to download the attachment ( Login / Sign up )